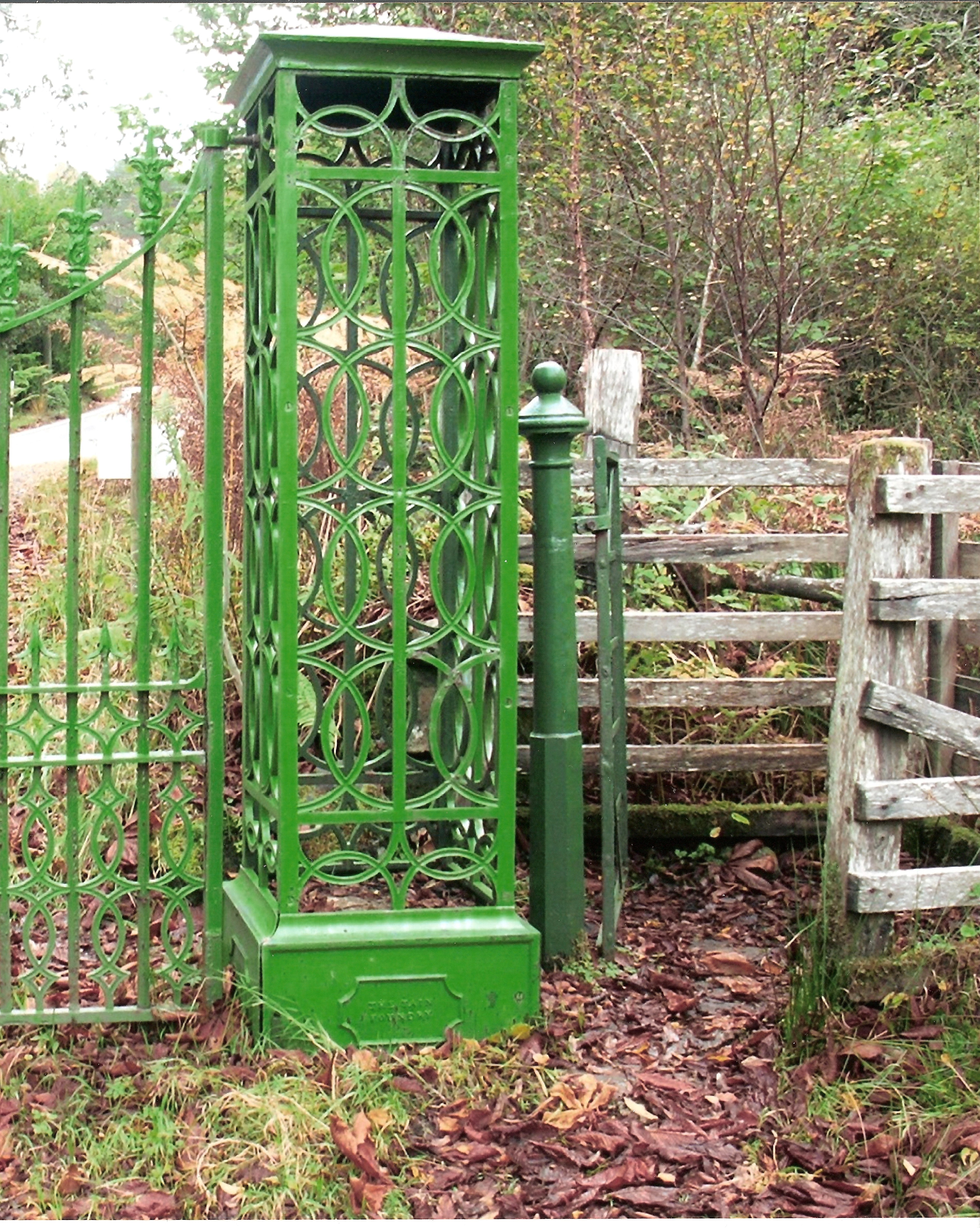 The History of Foundry House and Tain Foundry by Margaret Urquhart

These beautiful wrought iron gates were manufactured in Tain, as the plaque at the foot of the gate post testifies, and are a reminder of a locally important 19th Century industry, the Tain Foundry, which was located on Morangie Road. The “Green Gates” seemingly were erected in 1822 on the Arisaig Estate for Clanranald as a fine entrance to Glen House.  They were shipped by crate to Inverness, taken down the, then, brand new Caledonian Canal to Fort William before finishing their journey by ship.

The foundry did not exist at the time of writing the 1791 Statistical Account.  It does appear in the New Statistical Account of 1837 as an “iron foundry, casting wares for the surrounding countryside.”  However, it definitely existed sometime before that. In a “Parliament report upon the boundaries of the several cities, burghs and towns in Scotland, in respect to the election of members to serve in Parliament”, dated 1832, in the section dealing with Tain, the foundry is referred to as being ‘improved of late & may be considered in a thriving condition’.  This suggests it had already been in existence for a number of years before 1832 as the date accredited to the erection of the “Green Gates” confirms.

It was possibly first established by members of the Murray family.   Amongst the research material gathered by RW Mowat in preparation for his book “Easter Ross, 1750-1850: The Double Frontier”, is a reference to a steam engine being built in 1847, for a threshing mill at Shandwick Mains, by (amongst others) “Messrs Murray & Company, Founders & Engineers, Tain”.  There is also a reference to William John Murray of Rosemount as being the proprietor of the “Foundry, near Springfield” in 1859.  He was the eldest son of George Murray of Rosemount, a Provost of Tain, 1840-48.  I have no further information about William except that he died in 1884.

However, it seems the foundry had been rented out for some time.  It was advertised to let in The Inverness Courier on 3/7/1851, and a Mr John Kidd was given as the “present Tenant”.  The 1851 advert describes what was up for let as follows – the “whole premises, foundry, smithy, pattern & millwright shop with good dwelling house at the work…… machinery by steam engine”.  The extract from the plan which accompanied the 1832 report shows that at that point in time there is no accompanying house, whereas the extract from a plan of Tain lands owned by the Marquis and Marchioness of Stafford in 1854, shows that the foundry had expanded and a house had been added to the site, which ties in with the description given above.

Foundry House does not show up on the 1851 Census.  However, a James McKidd, iron founder, 26, born in Thurso, was a lodger with John Sutherland, draper, grocer and general merchant, in King Street.  Despite the different versions of the name, it seems likely that this was the “present Tenant” referred to in the 1851 advert.  Either, being a young unmarried man, he preferred to stay in lodgings, than in the house attached to the foundry or he had vacated the house on giving up his tenancy and the new tenant had not yet taken up residence.

The new tenant was a Donald Ferguson and members of the Ferguson family were to operate the foundry and occupy Foundry House from the 1850s and into the 1890s.  The Fergusons came to Tain from Elgin where it seems they also had a foundry.  The museum received information regarding this family from three different descendants which give a somewhat confusing picture.  However, it would appear that the two foundries might have been operated at the same time by Donald and later his son James Wright Ferguson.  An 1860 Directory describes the Tain business as “iron & brass founders, manufacturers of agricultural implements & smith work in general”.  RW Munro in his book “Tain Through the Centuries”, produced for the town’s 9th Centenary, provides this information – “one of the family invented a swing plough called after him; widely used throughout the north and won prizes at ploughing matches for its users”.

Donald, who died in 1880, aged 69, was still being referred to as the tenant of the Tain foundry in the Voters’ Rolls of the 1870s.  His son carried on the business but if the information provided by one of the descendants is correct, he died in 1892, so the James Ferguson who appears in the Burgh Accounts for repair work and providing items such as gratings for gutter traps and pulleys for the Slaughter House in the later 1890s, must be his son also called James Wright Ferguson.  I don’t know the reason for, or the exact date of, the closure of the foundry but the last-mentioned item in the accounts is dated 1897, so it was probably about the turn of the century, very late 1890s or early 1900s. The same burgh accounts record an Alex Munro renting the “stone depot at foundry” during 1906-07.  This could either mean the site was being used to store stone taken from the quarry on Tain Hill or stone from the foundry buildings.  Either way, the foundry was obviously no longer operating, and at some point, the foundry buildings were demolished.

Now all that remains is one wall and Foundry House.  The latter’s position only a pavement’s width from Morangie Road along with the size and shape of the window openings show it to be much older than the more recent buildings now lining the road and set back with garden space between them and the road.  Since it was first built, several alterations have been made to the house. The original sash windows have been replaced with modern ones. The front porch is an addition as are probably the dormer windows.

An interesting PS - Another son of Donald followed a very different path from his brother James.  The following item appeared in The Celtic Monthly March 1904 – “the Hon. John Ferguson, CMG, MLC of Colombo, Ceylon had been selected Chairman for the 1904 Annual Reunion of the Glasgow Ross & Cromarty association; John Ferguson was born in 1842.  He won the Sir James Matheson Gold Medal in Tain Royal Academy at the age of 13.  In 1861 he sailed for Ceylon and became joint Editor of The Ceylon Observer.  Established and edited a journal called The Tropical Agriculturist, travelling extensively in the tropics as part of his research; had recently completed a third tour of the world; had “played a noble part by assisting in the social, moral and economic advancement of Ceylon; effecting the extension of the railways, in improving conditions of life, and above all in making the great natural resources of the colony known to an ambitious but unenquiring world;” produced several editions of a book on Ceylon and a yearly “Handbook and Directory”  He was appointed a member of the Legislative Council of Ceylon in 1902 and made C M G by King Edward VII in 1903“.

Not bad for a son of an iron founder. According to one of the three descendants who contacted the museum he had been set a precedent with one of his uncles being the Editor and owner of the Colombo Observer and another was a Surveyor in Ceylon [now known as Sri Lanka].  The same source says he “had offspring who were missionaries in that country.”