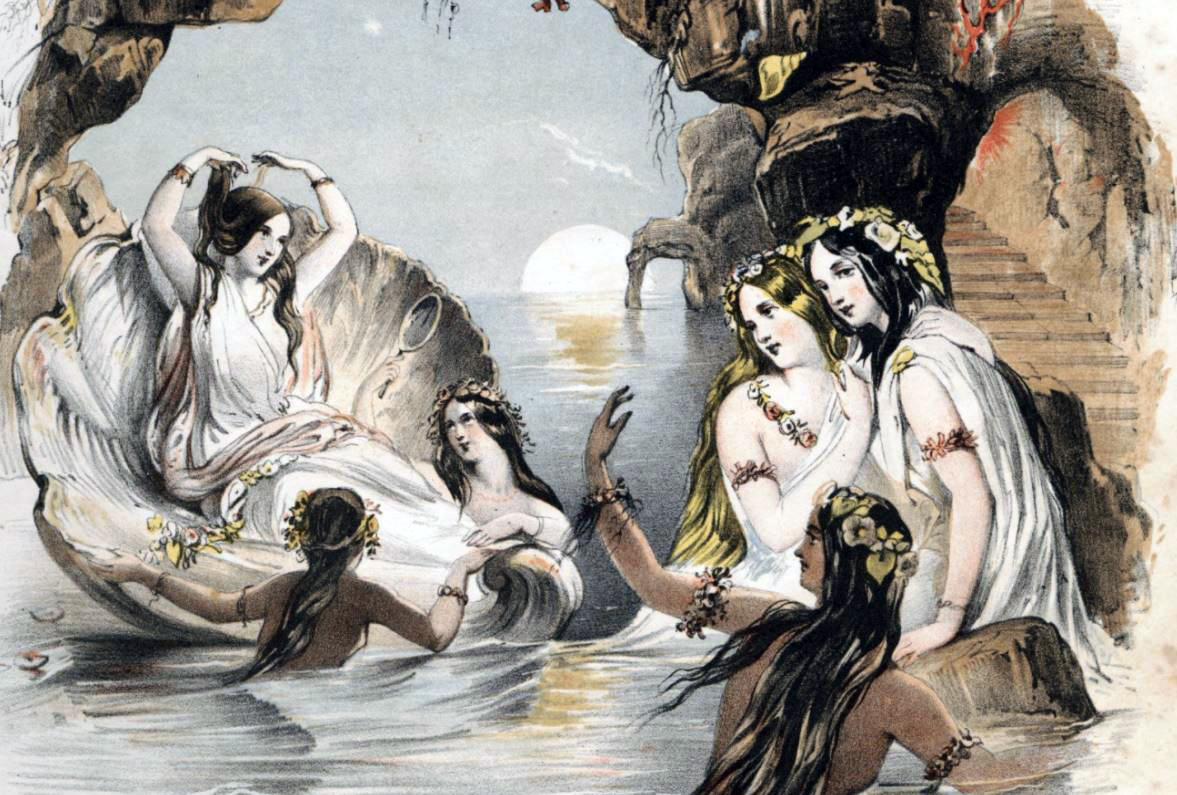 A Sutherland Folk Tale by Helen Drever of Tain

A summer dawn was breaking on the northwest coast of Sutherland. The sea was at the ebb and Nature was still and beautiful. Even the young crofter, Dougal McVeagh, who had lived all his life in the cottage over the hill, and who knew every stone on the beach, felt that wonderful radiance when the sun rose behind the hill and touched the western sea with loving fingers of light.

"Surely", he thought, “something unusual was moving out there in the little bay - something white and lovely – something that flashed like gold - what could it be!”

Then a ray from the rising sun lit up the figure of a mermaid, who sat out there on a rock combing her lovely golden hair. As Dougal drew nearer to her he noticed a bundle lying on one of the rocks. He picked it up and found it was the skin of a seal that he carefully refolded and held behind him.

The mermaid saw the movement and started, then, jumping off the rock on which she was sitting, she approached the place where she had left her skin. Seeing that it was gone she began to weep softly and, holding out her hands to Dougal, she said – "0h, mortal: Why steal from me that which can do little good to you, and which leaves me very poor indeed. Oh, give me back my skin!"

"No, no," said Dougal. "Heaven forbid that Dougal McVeagh should hurt a hair of your lovely head! But I'll not give you back that ugly thing. I'll do far better, for I'll run to my cottage for some pretty clothes that my dead mother wore when she was young."

"But, mortal", said the mermaid, "I cannot stay. And you must not tempt me, for indeed I must return to the coral caves where I live with my sisters, and where a brave knight of the sea fights the sea-lions and kills the great sea serpents in my defence. Only last night, in the silver moonlight, he left me to go hunting. What if he has returned to find we gone: 0h, kind mortal, give me my skin and let me go!“

"Lady", said Dougal, "it is by refusing that same skin that I can prove my kindness. Wait you here for me, and I will bring clothes to you in which you will look far prettier, and feel far happier, than you did in that ugly wet skin." And running to his cottage he was back in a few minutes with the clothes, which, in truth, were very pretty. He laid them on a flat piece of wood which he sent sailing across the water to the mermaid.

When she saw them she laughed with pleasure and drew the little raft into a cave close by. In a few moments, she put them on and came out of the cave, looking - ae Dougal was not slow to tell her - the prettiest human maiden ever seen. "Now come with me to my home", said the delighted Dougal.

"My mother used to wish for a daughter called Mary, so I will call you by the name she loved, and you will stay with me and be my wife."

"Wait just a moment", said the newly christened Mary, as she knelt on a rock above a quiet pool, and looked down admiringly at her reflection in the water. And as she raised herself she said in childish delight -"Indeed Dougal, you are quite right. _ I do look very pretty! Your mother's dress suits me far better than my seal skin, and I will go with you to your cottage." ’

So Mary the mermaid went home with Dougal and he took care to hide the sealskin in a dark corner of the barn. Time went on and five beautiful children came to Dougal and Mary, and Dougal - when he thought about it at all - felt that summer dawn long ago had been a lucky one for him.

Mary seemed quite contented, but Dougal never noticed that when a high tide washed up big drifts of seaweed upon the beach she got restless and moody, and went away by herself. And when she was cutting the brackens, which they used for bedding for 'the cattle, she would sigh to herself, and sing softly

One harvest day when the eldest children were quite big, Dougal with the help of the family was building stocks in the field. So Mary was alone in the cottage when the youngest child came running in with a queer old skin which he had found in the barn. Mary trembled and flushed as she took it from him and hid it away. That night no sleep came to her eyelids, for in her ears the sound of the waves and the voices of her sister mermaids kept echoing from the coral caves below the sea.

At last, she stole out of bed, leaving Dougal sound asleep. She stole into the open air, and, as she left the cottage, she - threw out her arms as if to call down a blessing on those she was leaving. Then, lifting the sealskin she raced over the hill to the shore where she drew on the old skin. And dawn, which had seen her arrival, now saw her departure; and the rising sun pointed a finger of light at the spot where the waves now closed over "Mary the Mermaid" forever:

Dougal used to go down to the shore and call Mary! Mary! Come back to me!" But only the seabirds and the waves replied to his call. But he knew that Mary had not forgotten, because, every morning, fine fish were lying on the shore for the cottage breakfast!

Long after Dougal and his children's children were dead, those who came after them were known in the West of Sutherland by the name "Sliochd na Maighdean Chuain" - "The Children of the Mermaid."