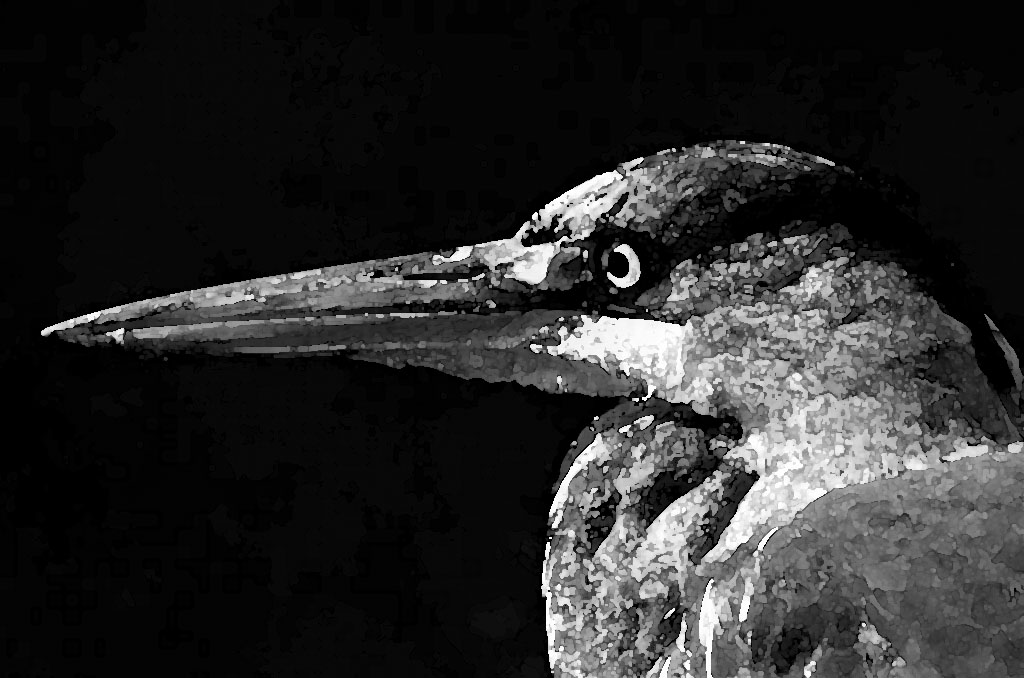 An unbelievable story of a bereaved heron who avenged the shooting of its mate.

Every animal will fight for its mate, I have heard of a bull elephant that quite deliberately pursued the man who had shot one of his cows. The bull followed the hunter for a period of several weeks over a considerable distance. Finally, it got him alone, - without his gun, when he was smoking a pipe after his evening meal. The elephant quite methodically trampled him to death.

Stranger still, though of course, it may have been only a coincidence, is the fate of a young subaltern who was killed by a heron for the same offence. Jimmy Hargreaves joined the Battalion when we were stationed in a desolate camp on the South shore of Invergordon Bay. He was straight from Sandhurst and knew very little of Scottish Customs. In the extreme north of Scotland, the fate of Coleridge’s Ancient Mariner is as nothing to that predicted for anyone who kills a heron. Jimmy knew nothing of this superstition. I fancy most of his shooting had been among the stubble and spinneys of Sussex, where, gregariously in“heronries” and are rigorously protected. He spent most of his leisure pottering about the moors and hillsides which lay at the back of the camp. He brought back a number of rabbits, an occasional hare and even a brace or two of the Laird's grouse.

There was a small loch lying in the hollow of the hills about two miles above the camp. This was a favourite spot. I fancy that when there was no game Jimmy used to amuse himself by potting moorhens. One day, as he was tramping casually around the loch a pair of herons got up practically at his feet.- Without thinking, he let fly at the nearest and brought it down. The other flew away.

On his return to camp that evening he happened to mention in the mess what he did. For the first time in the history of the Regiment the mess corporal, a stalwart of Ross-shire with twenty years service broke his impassivity.

We all pulled Jimmy's leg, promising him the most frightful calamities, but no one took the incident very seriously. A couple of nights later. Jimmy came into the ante-room before mess with his hair ruffled.

"It’s that damned bird,” he explained, “each night when I come out of my hut he’s waiting for me. He swoops down at me as l come out of the door. Tonight he actually knocked my hat off—you’d think he knew it was I that killed his missus!”

Everyone laughed; no one could imagine any serious harm looming to an officer of a Highland regiment from a bereaved heron. A few nights later Jimmy had a shot at it but it’s had hard enough to see anything when one comes out of a lighted room. and, apparently, he missed. He seemed, however, to have frightened the bird away, for it failed to turn up on the following nights. Jimmy thought he might have winged it and forgot all about the whole matter. On Saturday evening there was no mess dinner. Most of the subalterns took the opportunity of going to the nearest town for a meal. Jimmy was the owner of a large and noisy motorbike, and he usually took at least one of us on the pillion, while as many as possible crammed into the mess car. The evenings were quite short. We had to be back in camp by eleven o'clock and the senior subaltern expected us to put in an appearance in the ante-room before we went to bed. hence, although the parties were usually cheery enough, there was not much drinking. On that particular night, I know Jimmy had no more than a couple of beers, so there was no question of his being tight. If he had been I should not have been his pillion passenger.

We left Tain, where we had dined, at about 10 o'clock, and we were within a mile of the camp when it happened. The road was narrow. And it cut straight across the moor it was bordered on both sides by deep ditches, usually about half-full of water. We were doing about thirty miles an hour and the road was brilliantly lighted in the glare of our headlamp. Suddenly, without any warning, a great bird-even in that split second I recognised Jimmy's heron-flew straight at us. A full-grown heron weighs quite a lot, and before Jimmy could swerve or duck it hit him full in the face. the next moment or two, I was knocked out.

As I recovered my senses I saw lights of the mess car, which was following us, shining on the road. I jumped up and waved at them to stop. By the light of its headlamps, we saw Jimmy's heron lying stone dead in the middle of the road. jimmy's bike was lying half out of the ditch. Beneath it was Jimmy, practically submerged in the water of the ditch. We pulled him out as quick as we could, but it made no difference. His neck was broken, and he was quite dead. Of course, it was only a coincidence, but none the less I wouldn't care to shoot a heron.  Would you?