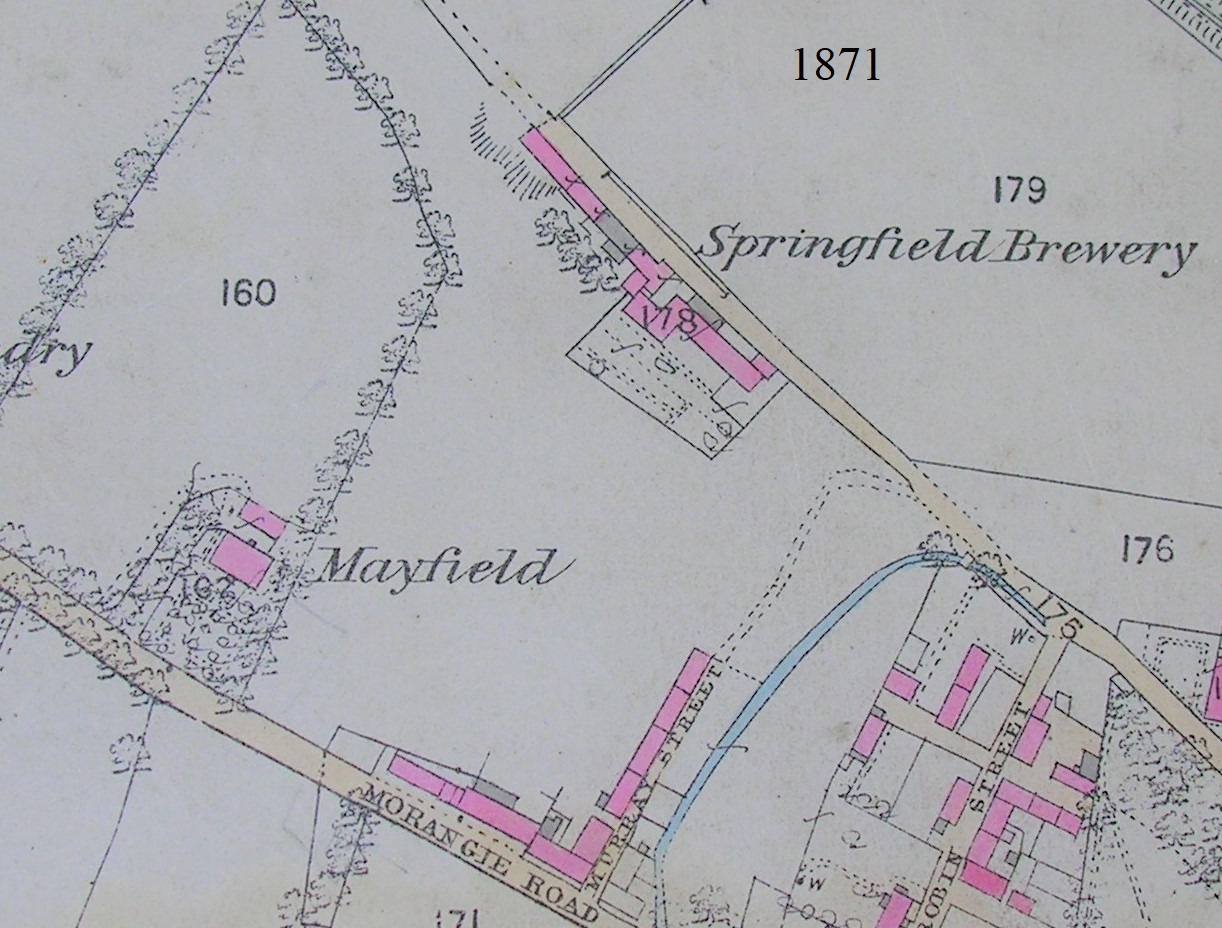 A look a the History of Brewing Ale in Tain by Margaret Urquhart.

Brewing of ale would have taken place in Tain before the 19th Century but would have probably been on a small scale - what might be termed a cottage industry – or perhaps by individuals mainly for their own use.

The first hint of a brewery as such is in 1800, when a Captain Allan Robertson was granted a feu on the east side of Links for the erection of a brewery.  However, I have found no evidence that this ever came to fruition.  What is known is that a “Contract of Co-Partnery between the Partners of Tain Brewery” was drawn up in 1818 (a copy of which is in a ledger in the Museum Archive) for the purpose of forming a company to erect and carry on an ale brewery at Morangie.

To this end “a Committee of Management” was to be formed with power to appoint “a fit person as manager & clerk and engage a brewer and maltsman” and a general meeting was to be held once a year at which the Committee of Management was to be elected “chosen from the Partners resident in Tain or the immediate neighbourhood”.  A ‘tack’ (lease) of a piece of land in Morangie, on which the brewery was to be built, was obtained from Hugh Rose of Glastullich and Tarlogie by an initial committee composed of Hugh Ross of Knockbreck, William Baillie Rose of Rhinie, and James Harper, distiller in Balblair.  The brewery would draw its water from the Morangie Burn.

In October 1818, a “Contractors Wanted” notice appeared in the local press appealing for tenders to build “a Strong Ale Brewery, with the necessary accommodation for Brewer, Servants etc.”  The intention was that it should be built “during the ensuing spring.”  At this point, the Manager and Clerk to the Brewery was a Donald Ross.  At some point he was succeeded by Mr M’Aulay, who himself, having resigned, was replaced by George Gallie in 1824.  In 1825, an advertisement was placed for another “experienced brewer and maltsman”.  Perhaps these changes were indicative of problems.

Certainly one of the partners in the brewery had financial problems.  In 1823, William Munro of Achany, “cattle dealer and partner in Tain Brewery”, was sequestrated (i.e. his property confiscated until his debts were paid).  He died in 1825 and his estate was put up for sale by public roup in 1827.  Then in 1832, the shareholders resolved to dissolve the “Co-Partnery concern” and the following year, in May 1833, the brewery utensils were put up for sale.  Presumably, there were no takers, as just over a month later, the brewery was advertised for let with “utensils complete.” Finally, it was announced in April 1834 that “Mackenzie and Gallie [George who was still the manager when the Co-Partnery was dissolved] have commenced the Brewing Trade in the premises lately occupied by the Tain Brewery Company” and had procured “an experienced brewer from the South.”

This partnership lasted until George Gallie died in January 1837.  The brewery, which was recorded in an account written in August of that year as supplying “most of the neighbourhood with excellent ale”, was carried on by his partner, Colin Mackenzie, until 1841, when he too met his demise.   His brother Daniel (later given as Donald - the two names were interchangeable in the 19th Century) Fowler Mackenzie then announced that he would “continue the business of brewing Ale & Porter commenced by his late brother Colin Mackenzie” and had “engaged the services of the brewer employed by his late brother”.

So, as far as brewing in Tain is concerned, it was, from 1849 onwards, concentrated in the Tain/Springfield Brewery.  Daniel/Donald F Mackenzie continued as tenant/occupier of Tain Brewery, living in one of the brewery houses.  In the 1851 Census he is described as a “farmer, 24 acres, & brewer, employing 5 men”.  Also part of his household was his nephew, Robert, described as “Brewer Manager.”  Then in February 1858 the Lease for the Tain Brewery and adjoining farm, “presently occupied by Mr Donald Mackenzie, brewer”, were to be disposed of by ‘Private Bargain’.  Either Donald himself provided the highest offer, or no other offers were received, as the Valuation Rolls indicate he was still tenant till 1860/61 when he died aged about 56 years.

Although I have not been able to establish exactly when, it may well be that the brewery had actually stopped producing ale at this point.  In 1861, “that portion of Tain Burgage Lands, the property of the Duke of Sutherland” consisting of “30 acres pasture, 29 acres arable” plus “brewery premises (note not actually referred to as a brewery) and dwelling house,” were put up for let.  The Valuation Rolls from now on give the location as “Blarleath”.  An entry, dated 1867-8, in the Scottish Name Book, says “This name is applied to a long narrow piece of level ground extending from Springfield Brewery to Morangie along the margin of the Dornoch Firth.”  Part of this can be seen on the 1854 map extract.

The person who now took on the lease of the land and brewery was a James Farquhar.  James and his brother, Robert, were tailors/clothiers in the High Street so unlikely to be actively farming or brewing.  Presumably, a farm manager was employed if the land was being worked.  Strangely, the occupier of the brewery from this point, according to the Valuation Rolls, was Edmond (sometimes Edward A) Farquhar, Robert’s son.   I say “strangely” because in the 1861 Census, James’ nephew is boarding with a family in Inverness and given as a grocer and I can find no trace of him in the 1871 Census either in Tain or Inverness.  Perhaps after the 1861 Census date, he returned to Tain and lived in the brewery house.   He was only 18 years in 1861 and had no brewing experience.  If he did return and lived at the brewery, he must have moved somewhere out with the area before the 1871 Census.  An Edward A Farquhar, the right age, does show up in Wiltshire!  Sometimes researches raise questions as well as answers.

However, yet again in October 1869, the brewery and lands were up for lease – referred to as the Springfield Brewery, the name given to it on the 1871 map.  In November 1869, another notice announced the “Displenishing sale, farm stock and implements, Springfield Brewery Farm”.  Again there is only reference to brewery “premises” not as a brewery as such and from this point more usually only in terms of “land attached to the brewery”.

The incoming tenant was Donald Fraser, grocer and wine merchant on the High Street, who owned the adjoining Mayfield property (see 1854 map extract).   Again it seems highly unlikely he would have operated a brewery.  The property was variously referred to as 3 lots – land attached to the Brewery; Blarleath; houses & Offices, Blarleath – for all of which Donald Fraser was tenant until 1978 when “the small farm and brewery premises and the dwelling house and offices known as “The Braes” adjoining, and partly within, the Burgh of Tain and presently occupied by Mr Donald Fraser, merchant” were this time put up for sale.  Presumably, Donald Fraser was the purchaser as the Valuation Rolls afterwards lists him as proprietor.

After Donald died in 1881, the property consisting again of 3 lots - referred to as land, Blarleath; land Mayfield and Blarleath, house and offices Blarleath - were tenanted and then owned by members of the Fraser family starting with Donald’s son, Hugh Munro Fraser.   In the late 1880s, the word “brewery” is no longer mentioned in the Valuation Rolls.   Some of the buildings at the brewery site remained.   Comparing the 1854 map extract to the one from 1870, it is obvious that the brewery buildings built by J Norie and Company had been extended.  By the beginning of the 20th Century, some of the original buildings had already disappeared.  The following appeared in the Ross-shire Journal, dated 16/8/1968 – “The old steading buildings at Blarliath* Farm, Tain, which more than a century ago were used as a brewery, have now been converted into a gleaming modern hygienic Cheese factory”.   The Blarleath site once more became a place of industry.

[*The Blarliath spelling seems to be favoured in more recent times.  I have used the historical version used in all the references I came across in my research and as given on Ordnance Survey maps.]