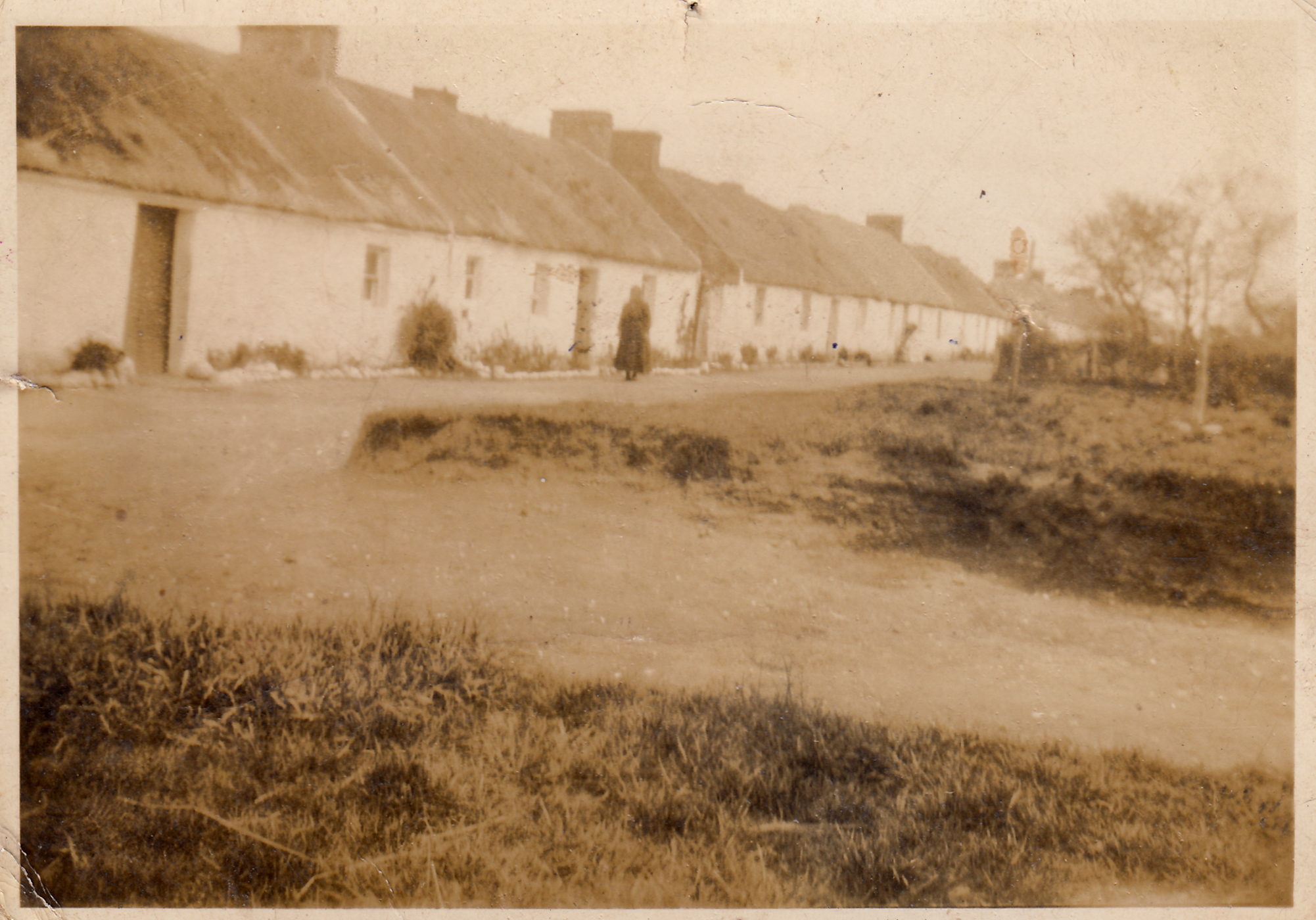 INTERVIEWER: Have you always lived in Inver?

INTERVIEWER: What year were you born?

NELLIE: I was born in 1908, in this actual house that we are in now

INTERVIEWER: You will have lots of memories of what Inver was like at the turn of the century. Was it as big as it is now?

NELLIE: No, No, a lot smaller and all the houses, except two, were identical. They were all very much the same, a room, a kitchen and a tiny bedroom. The kitchen was actually a living room cum kitchen. We had no running water and no electric light. The water came from the well and paraffin lamps. Coal fires mostly sticks were burned. We went to the Korrich for the whine. The men went to the woods for "ceeps", (there was a wood up at Arbol, it was cut down during the First World War). "Ceeps" were the roots of the trees, they used to dig them out and bring them home. They made beautiful fires, just like coal.

INTERVIEWER: Was Gaelic your first language?

NELLIE: Yes, my granny taught me the Gaelic, according to my parents. I could speak Gaelic before I could speak English. I must have been a problem because the first words I picked up from her were the words she often said to me, "The mi naire leat, cuiridh mi sa mhuirthu". (I am ashamed of you, I'll put you in the sea). In school, we spoke English. My father and mother spoke Gaelic and I went to Gaelic services with my people.

INTERVIEWER: Did the whole of Inver speak Gaelic at that time?

INTERVIEWER: Were there many children in the village?

NELLIE: There were big families, but we didn‘t have a big family although the majority had.

INTERVIEWER: Do you have any recollection of how many were in your class?

NELLIE: I have a photo of my class. Ten pupils.

INTERVIEWER: What kind of work did your parents do?

NELLIE:  My father was a fisherman-crofter and so were the majority of men in the village. They had boats and so many men to a crew. The top of the village, from the school down to the bottom of the bras were all Inver's crofts. Patches of ground, every house had its own patch. They grew potatoes and corn and what they called "fitachd". They used to winnow this in the spring. It was like peas, not garden peas, it had tiny little pods. I don't know what the English word for "fitachd" is. They used to sell it to Wallace & Fraser in Tain. It was winnowed with a riddle on a windy day in the month of March. They spread an old sail of a boat on the ground and the wind blew the chaff away. It was put into bags and taken to Tain. It was a great day when they sold the "fitachd" as there was money coming in. Money was something which was very scarce. Most of the houses had pigs, they bought the little "cuileans" (piglets) as we called them, and sold them at New Year time. This was how they got their "bottle", but that died out too. We used to have two pigs, two horses and hens. Behind the house looked just like a little street, there was the barn, the stable and the henhouse. Everybody had hens, their own potatoes and fish. The men used to put lines down on the shore and caught flounders in winter if it was too stormy to go out on the boat. Plenty of rabbits and we lived on rabbits. Some people went around the doors and sold them. After they were skinned, the skins were hung in the shed and sold to the peddlers who went round the door. Dishes and reels and lace were exchanged. Sometimes money was given for the skins, but mostly goods. I remember them getting 8d. for a rabbit skin which was a lot of money during the First World War.

The staple diet was as I have said, eggs, rabbits and fish. If a hen was very old then we would boil it. At the weekend we would have beef. It was a great thing to have broth beef and potatoes. This was the Sunday meal. Every household was the same. It was the same thing with clothes. Every man dressed the same, with a navy suit, bowler hat, white hard dickie and boots which they had for years unless they put on too much weight. They used to walk along to Tarbet Church in Portmahomack. There were two churches there, the Free Church and the United Free, which is now the Church of Scotland. They looked just like penguins.

INTERVIEWER: What kind of clothes did the ladies wear?

NELLIE: They all wore different clothes. In my generation, they wore capes and wee black hats with sparkly bits in them, like mutches, but they were black. They were very dressy. That was in my grandmother's day. In my mother's day, it was different. My mother was small, slim and very petite and she always wore Queen Mary's style. Coming from Inver, as she did, I suppose this is very hard to believe, but she had a great flair for millinery and she copied Queen Mary's "touck" as she called them and always made them up herself and then wore them. The "touch" was made from either velvet or whatever material she had. I can remember her in a black coat with a little askrakan collar. She was very conscious of her dress. Coats had come into fashion then and capes had gone out. When I went to school I had a white pinafore and we all looked just like the "railway children" right down to our boots. The old ladies made our pinafores.

INTERVIEWER: Did you have a resident dress-maker in the village?

NELLIE: No, my mother was the dressmaker in our house. There was no dress-maker. You would have had to go to Balmuchy where there was a Miss Colson and a Miss MacDiarmid who were both dress-makers. Miss MacDiarmid made all my best clothes.

INTERVIEWER: Going back to your school days, did you attend the little school which later became a meeting house?

NELLIE: No, no. The existing school must be about one hundred years old, judging
from the ages of the children in the photograph.

INTERVIEWER: When you say your father and other men of the village were fishermen, did they go away for days?

NELLIE: No. They used to go to the herring fishing. The women went to Yarmouth and Kirkwall, but the first world war put an end to that. My auntie used to go to the fishing and it was grand when they came home with their trunks full of fancy things. They had bought them in other shops which were different from here.

INTERVIEWER: Do any of the local people still do crofting in Inver?

NELLIE: Well, my nephew has the whole of the top bit of ground on both sides of the road and my cousin has got the rest. The council have let out wee patches to different people up at Fuaran at the top of the village. There are only two crofters left.

INTERVIEWER: Have you any idea when they stopped crafting?

NELLIE: Well, my father carried on and kept his ground for my brother who was away at the war. He was a Prisoner of War and it was my father's heart's desire that my brother should take over the croft when he came home, which he did. He extended the croft as so many had given up crofting, so he had a much bigger croft than my father had had. Now it is his son who carries on and he has even more land now than his father had.

INTERVIEWER: Can you recall any of your mother's memories?

NELLIE: My mother was a very quiet woman. She had a handicapped sister who was tied to the house. When my father married my mother, he came in here, as my mother couldn't leave her sister and her old mother was still alive too. There was a lot of people in this house at one time. I don't know where they all stayed. My auntie was a more outgoing person than my mother. She was a spinster who went to Tain and all around.

INTERVIEWER: I take it you had to walk to Tain?

NELLIE: He did originally, but then my father bought a pony and trap. We were awfully well—off having a trap. We went to Tain Church as my grandpa was an elder there in what is now known as the Parish Church. It was then the United Free church. Later, in the 30s, there was a bus that went to Portmahomack, so we then attended Tarbet Church. Inver is now in the Parish of Tarbet. During the war, the Fendom Road was closed because of the Aerodrome, which was on both sides of the road. It was suggested that the members of the church which we attended in Tain should join with the Tarbat Church and this was how we came to worship there.

INTERVIEWER: I believe there is an old, ruined village around here?

NELLIE: Yes, but there was nothing there but stones when I was a wee lassie. Evidently, Inver started on the other side of the burn, called the "Ault“ and this would have been the first settlement. It is very sandy along there and there used to be very high sandbanks which have now disappeared. The outlet to the sea was blocked and they came along here. The corner where they are working on the sewerage at the moment used to be a gravel point and this is where the boats were tied up.

INTERVIEWER: Would it have been a settlement due to the clearances?

INTERVIEWER: Thank you very much for your time and information.
NELLIE: Och time? I have plenty time.