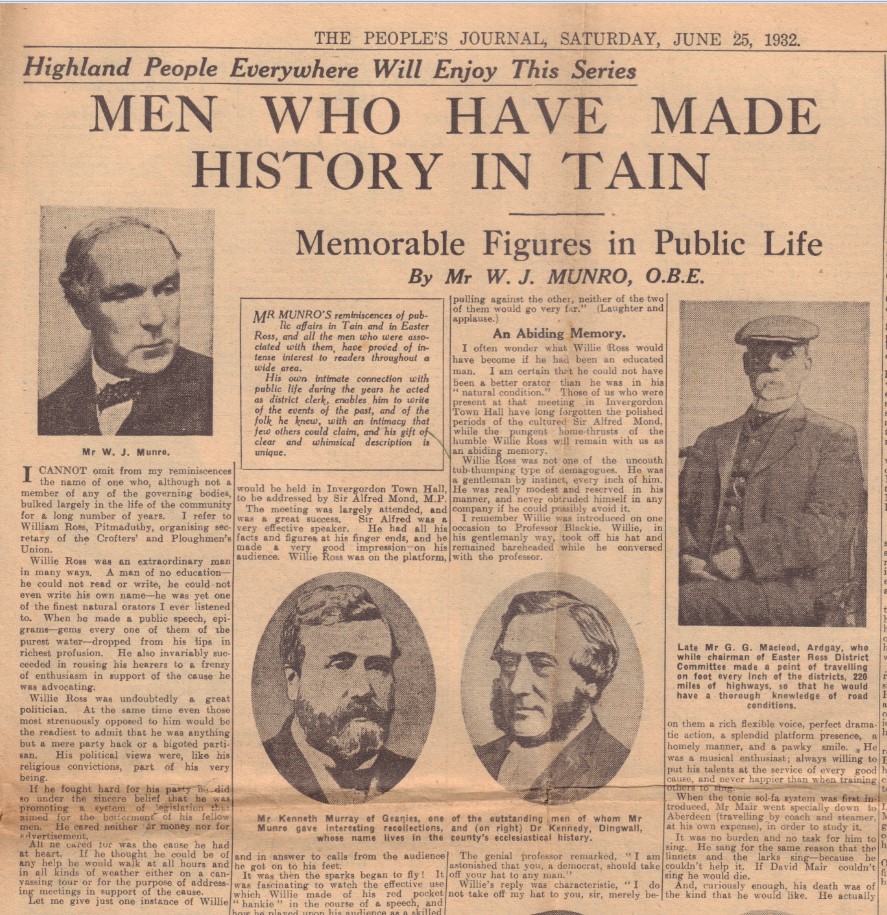 One of several articles from the Peoples Journal in 1932 written by W J Munro from Tain.

I CANNOT omit from my reminiscences the name of one whom, although not a member of any of the governing bodies bulked largely in the life of the community for a long number of years. I refer to William Ross, Pitmaduthy, organising secretary of the Crofters’ and Ploughmen’s Union.

Willie Ross was an extraordinary man in many ways. A man of no education, he could not read or write, he could not even write his own name—he was yet one of the finest natural orators I ever listened to. When he made a public speech, epigrams—gems every one of them of the purest water—dropped from his lips in richest profusion. He also invariably succeeded in rousing his hearers to a frenzy of enthusiasm in support of the cause he was advocating.

Willie Ross was undoubtedly a great politician. At the same time, even those most strenuously opposed to him would be the readiest to admit that he was anything but a mere party hack or a bigoted partisan. His political views were, like his religious conviction, part of his very being. If he fought hard for his party he did so under the sincere belief that he was promoting a system of legislation that aimed for the betterment of his fellow man. He cared neither for money nor advertisement. All he cared for was the cause he had at heart. If he thought he could be of any help he would walk at all hours and in all kinds of weather either on a canvassing tour or for the purpose of addressing meetings in support of the cause.

Let me give just one instance of Willie Ross’s Power in dealing with an audience. Sir Alfred Mond, M.P. (afterwards known as Lord Melchett), had been staying in Invergordon Castle for two seasons. Sir Alfred came in almost daily to Tain to play golf, and as captain of Tain Golf Club, I used to meet him on the links. Sir Alfred was an ardent Liberal at that time. He suggested to me one day that he would like to give a political address while he was in the county, and he asked me if I could arrange this for him.

As requested l arranged, through the local Liberal association, that s public meeting would be held in Invergordon Town Hall, to be addressed by Sir Alfred Mond, M.P. The meeting was largely attended and was a great success. Sir Alfred was a very effective speaker. He had all his facts and figures at his finger-ends, and he made a very good impression on his audience. Willie Ross was on the platform, and in answer to calls from the audience he got oh to his feet: It was then the sparks began to fly! It was fascinating to watch the effective use which Willie made of his red pocket “hankie” in the course of a speech, and how he played upon his audience as a skilled harpist plays upon his harp.

I made some notes of his speech on this occasion, and I am able to give some extracts of what he said. He began with a local reference. At that particular time, the Invergordon Town Council were endeavouring to secure a water supply from Kinrive Spring. A public inquiry in connection With this matter had been held by the sheriff in Tain Courthouse, and the various riparian proprietors were represented at the inquiry by their respective agents all in opposition to the scheme.

“One of the greatest gifts which God gave to man,” said Willie, "is pure, wholesome water. The people of Invergordon want to make use of God’s free gift. To prevent them getting it there was a gathering of the Scribes and the Pharisees in Tain last week, the like of which hasn’t been seen since the days of Pilate in Jerusalem!" This put Willie in rapport with an Invergordon audience, and his first sally was received with tumultuous applause.

I recall the scorn with which Willie repudiated the idea that patriotism was the monopoly of any party in the state. I also recall the thrill which went through the audience, when the drafter referred with pride to the fact that his “grandfather stood sentry over Napoleon in the Island of St Helena!”  (I have since verified this fact. It is also interesting to note that the officer in charge of the sentry party at St Helena was a Ross-shire gentleman Lieu, McLeod of the Ross-shire Buffs).

Willie then had a tilt: against the House of Lords, which was one of the burning questions at that time. Referring to the composition of the membership of that august House he said, “Some of them are there because they are the sons of their fathers, and some because; they are the sons of their mothers.” This cryptic reference to the genealogy of some of our hereditary peers was apparently understood and appreciated by the audience, for they simply yelled with delight. By this time, Willie had his audience worked up to a white heat of enthusiasm, and they applauded everything he said.

A final extract Item my “notes” of this speech. Willie had been dealing with some phase of the political situation which I forget, and which really does not matter. I was struck by the phraseology and took down what was said. “I am not a married man,” said Willie, amid laughter, “and I do not know much about the married state.” There are two things I have noticed, however, in going through life. The first is that a good man is always a better man if he gets a good wife.” The other thing he noticed was, that "when two people were yoked together, and one was pulling against the other, neither of the two of them would go very far.” (Laughter and applause)

I often wonder what Willie Ross would have become if he had been an educated man. I am certain that he could not have been a better orator than he was in his “natural condition.” Those of us who were present at that meeting in Invergordon Town Hall have long forgotten the polished periods of the cultured Sir Alfred Mend, while the urgent home thrusts of the humble Willie Ross will remain with us as an abiding memory. Willie Ross was not one of the uncouth tub-thumping types of a demagogue. He was a gentleman by instinct, every inch of him. He was really modest and reserved in his manner, and never obtruded himself in any company if he could possibly avoid it.

I remember Willie was introduced on one occasion to Professor Blackie. Willie, in his gentlemanly way, took off his hat and remained bareheaded while he conversed with the professor. The genial professor remarked, “I am astonished that you, a democrat, should take off your hat to any man.” Willie’s reply was characteristic, “I do not take off my hat to you, sir, merely because you happen to be Professor Blackie. I take off my hat to you because I respect the Superior talents which the Almighty has bestowed upon you.” The professor was greatly impressed with the quiet dignity displayed by Willie Ross and expressed the great pleasure he had in meeting him.

Personally, I always felt humbled in the company of Willie Ross. It’s a great matter to have known a man in this sordid world, to whom such things as self or pelf made no appeal, and whose only ambition was to spend and be spent in the service of fellow men. I feel proud today that I was considered worthy to be counted among the friends of William Ross, Pitmaduthy.