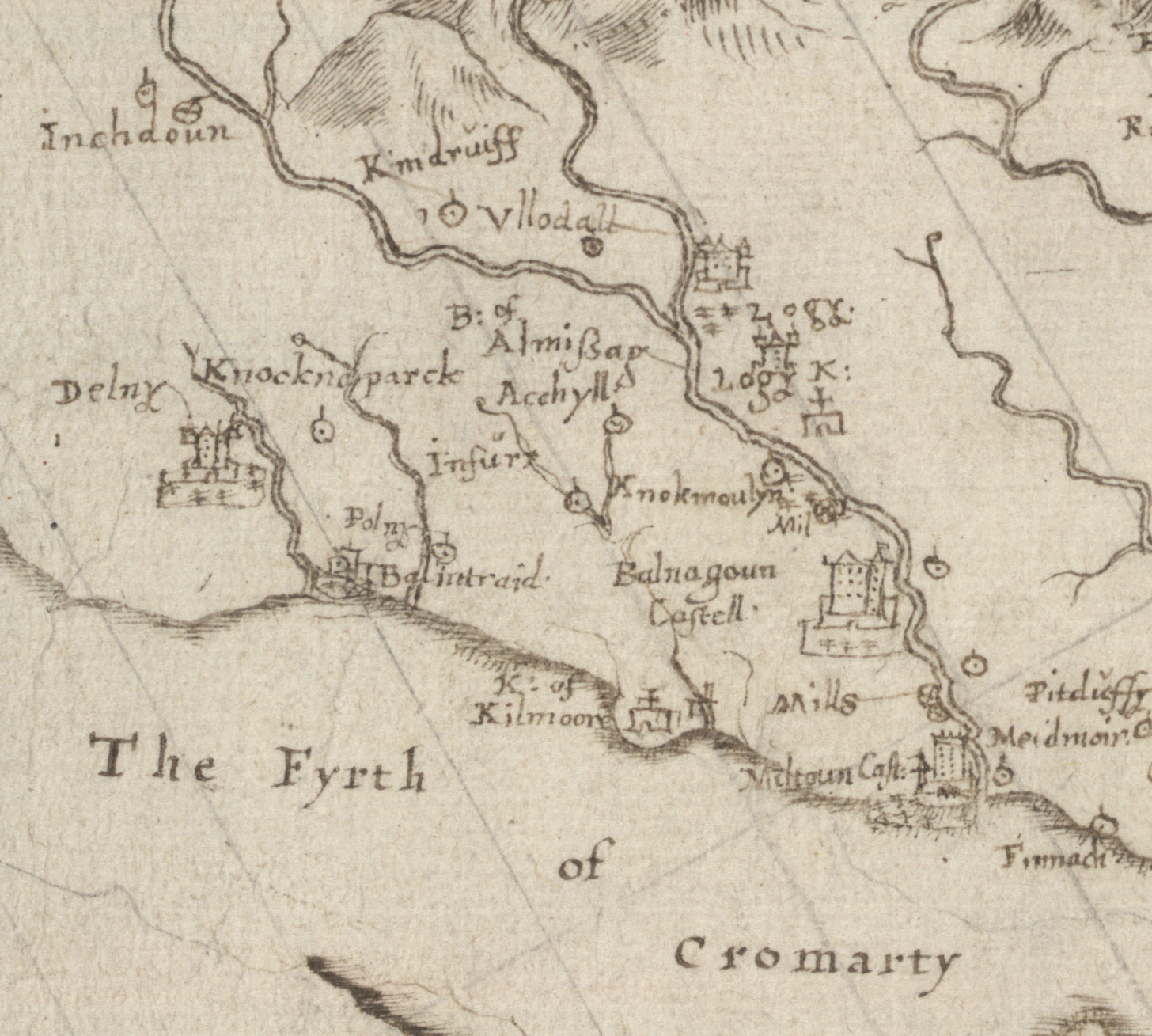 An account, from the Privy Council Records, of a large number of the Munro and Ross Clansmen being denounced rebels for breaking up a Baron Court being held by, King James VI's Ambassador, Sir William Keith of Delny.

The lands of Delny, which had been home to the old Earls of Ross, sit in-between traditional Munro and Ross Clan lands very close to the Clan Ross castle at Balnagown. In 1586, these lands were made into a Barony and gifted by King James VI of Scotland to his 'Master of Wardrobe' Sir William Keith. He was a close confidant of the King who served as his ambassador to Queen Elizabeth I of England and other foreign governments. Notably, it was William the King sent as ambassador to England to intercede before the trial of his imprisoned mother Mary Queen of  Scots later the same year.

With this gift the now Sir William Keith of Delny found himself, landlord, for many Ross and Munro clan members and his attempts to administer justice to them, clearly upset the old Easter Ross Clans.  In 1587 they, despite Sir William's royal connections, break up his Baron Court at Delny with 400 armed men, whilst threatening him and his baillie John Vaus of Lochslin.

The Munros and Rosses, despite significant tensions between them at this time, are still cooperating and showing solidarity with their kinsman Andrew Munro. They are even willing to risk taking an armed stand against the King's man in Easter Ross. Interestingly, the list of those denounced rebels does not include the Chief of either Clan but does include large numbers of both Munros and Rosses.

'Order to denounce Hugh Munro and a number of others for not appearing to a charge of obstructing bailie courts in the earldom of Ross;

King's letters raised by Sir William Keith of Delny, heritable fuear of the said barony and bailie principal of the earldom of Ross and lordship of Ardmannoch, John Vass of Lochslin, his bailie depute, and John Keith, apparent of Ravenscraig, his Majesty's immediate bailie, appointed for uplifting the rents and duties of the earldom and lordship foresaid, set forth;

That while John Keith and John Vaus were, upon 27th December last, holding their bailie courts within the barony of Delny, for administering justice to the King's proper tenants within the said earldom and lordship;

accompanied by many others, to the number of 400 persons, all armed with "jakkis, steilbonnettis, pistollis, bowis, darlochs," and other weapons, came to the place where the complainers were sitting in judgment, "and there plainly declared that they were come expressly to be avenged of an alleged wrongdoing in the said court to the said Andrew Munro of Newmore of before: whereupon immediately, by their most insolent behaviour and sundry contumelious speeches uttered by them, they interposed them to the holding of the said court, and compelled the said complainers to rise and leave all further prosecution of justice the said day."

Having been cited, but not appearing, and Sir William Keith and John Vaus appearing for themselves and for John Keith, apparent of Ravenscraig, the Lords of Secret Council ordain the defaulters to be denounced rebels."