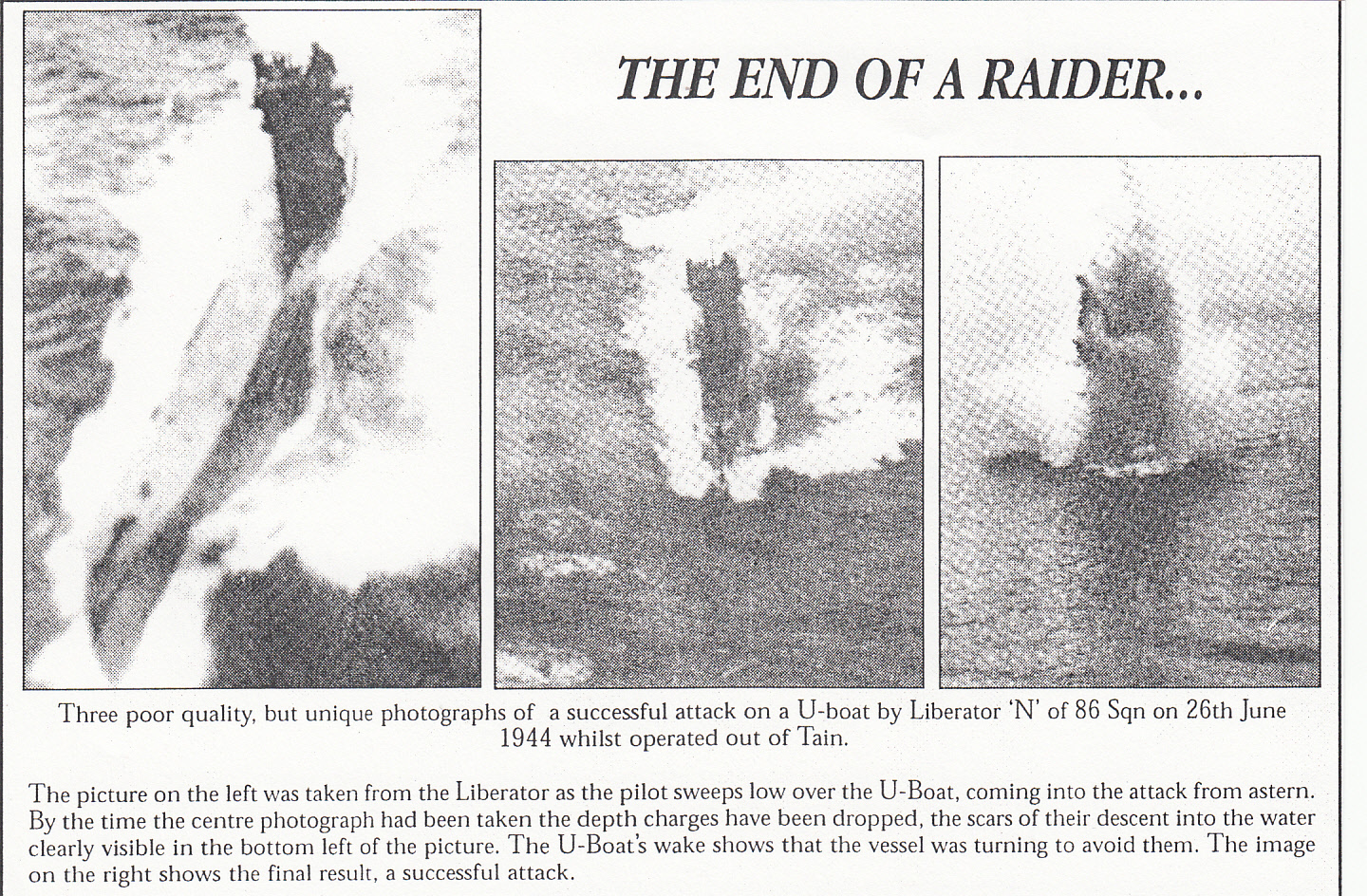 A first-hand account from Bert Hunt, the Flight Engineer, of a Liberator from 86 Squadron RAF Tain, attacking and successfully sinking U/Boat 317.

"On the 26th of June, we took off at 20.40 hrs and proceeded to patrol areas between the Shetlands and Norway. At 23.20 hrs at a height of 500ft we sighted U/boat 317 at 5 miles range - we entered cloud and turned in its direction. At this point in time, I was in the rear of the aircraft, I immediately took a handheld camera into the rear gun turret, elevated the guns, opened the side window and prepared to photograph the ensuing action. Photographic evidence was an essential requirement of the Admiralty in support and corroboration of an engagement with the enemy's naval forces. This left us with only one effective gun, a ball mounted .5 Browning in the nose, this gun was operated by our New Zealand Navigator Ft/Sgt Des Carter.

We broke cloud with the U/boat at a range of some 2 miles and you will see from the official report that we were repeatedly hit by accurate anti-aircraft fire during both our attacks, however, on the second run-in Des Carter managed to silence the enemy gunners and although by now in a crippled state, enabled us to carry out a successful attack. Des Carter was awarded the D.F.M. I enclose a copy of the most dramatic photograph of the series taken by me. It shows U/boat 317, from a height of 50 ft or less, only seconds away from destruction - clearly visible on the starboard side of the boat's stern is the circular splash of one of our depth charges as it enters the water.

At 02.15 hrs 27th June on three engines and a damaged starboard undercarriage we crash-landed at Stornaway on the Outer Hebrides. The next morning we were air-lifted back to base at Tain and we left our aircraft, Liberator FL916 N, for temporary repairs to be carried out.

On the 7th of July 44, I flew with a skeleton crew to Stornaway to pick up the repaired aircraft. With a runway of only 1400 yards, take-off was difficult and put quite a strain on the aircraft, however, we arrived back in Tain safely only to find that when all the repairs had been checked, and patches stripped off, it was revealed that the Main Wing Spar had been fractured, a shell had ricocheted off number 3 engine. The aircraft was declared un-airworthy and in fact, it never flew again.

In September 1944 Squadron Leader Geoffrey Parker was awarded the D.F.C. The coloured photograph shows myself (on the left) and my second pilot, Sydney Norris when we revisited our old aerodrome a few years ago. A small area is still being used by the R.A.F. but behind us can be seen the overgrown main runway from which I took off over ninety times. In the far distance can be seen the now derelict Flying Control Tower.

Jan1999 Note by J.F. I have sent Bert two photos showing repairs done to the aircraft. He is coming up to Tain in May."

Information from the research of the late John Flemming, Inver.