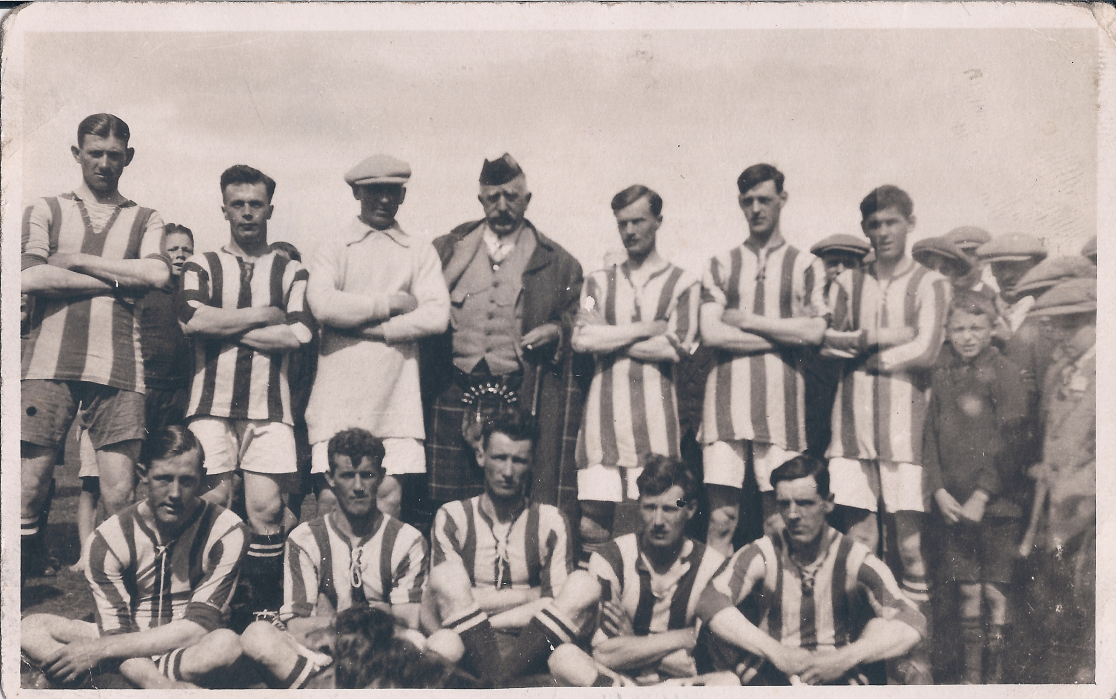 The story of Hugh Macleod, an accomplished Tain sportsman who played for his country before meeting a tragic end.

On the afternoon of Saturday, May 22nd, 1925, the following men took to the field in the North of Scotland Cup Final to represent Saint Duthus against Catch-My-Pal of Inverness:

For the Pals, the team had been unchanged for most of the season, and rightly so, having already captured the North of Scotland League title and the Mid-Ross Shield. On the day, they lined up as:

That fiery determination of the young Saints, a feature of their season so far, saw them make an immediate impact, as described by a writer for the Ross-shire Journal:

“Playing open and penetrative football, Tain were early in the picture. Their forwards harassed the Pals’ backs to such an extent that from a cross from the left, Vine netted.”

The early goal sparked some life into the Pals and an onslaught on the Saint Duthus backs ensued. Steadfast, “Dot” Macleod stood up to the challenges at full back alongside Ian Macdonald. Within moments, they succumbed to the pressure, as a foul “close in” to the goal resulted in a free kick for the Inverness side, from which, Mackenzie, the Pals’ outside right, lashed the ball home to equalize.

At 1-1, play raged from end to end in a game described as having “plenty of thrills and excitement”. It was the Saints, however, who were next to find the net.

“The visitors were worthy of the goal they got, when H. Macleod scored the best goal of the match from well out, the ball completely deceiving the Pals’ goalkeeper.”

Hugh Macleod’s stunning strike was all that would be added to the scoring in the first period, despite a Mactavish effort nearly succeeding when it struck the cross bar just before the break.

Fine showers of rain wetted the Thistle Park turf as the second half began, and the Pals, undeterred by the deficit in the score continued to press forward. In the face of great pressure, Ross was later to be commended for his performance between the sticks, with several of the Pals’ attempts “handled in masterly fashion” by the Saints’ goalkeeper.

Rather against the run of play, the Tain men were awarded a penalty as the game reached its latter stages. Macleod, looking to add to his goal tally, miskicked the ball and shot wide. Spectators and the Saints men alike may have been wondering whether or not there was to be a twist in the tale. As the game drew to a close though, the Pals were all but spent and Dunnett, in on goal, did everything but score as the Inverness side appeared to have resigned themselves to defeat.

The Saints finished strongly and as the referee’s whistle blew for time, the visiting support rejoiced as witnesses to their club’s moment of unprecedented success.

The victory had served as a showcase of the abilities of the young Saints players but also spoke volumes for the strength of Ross-shire Junior football. Teams from Inverness had so often dominated the North of Scotland Junior Cup, and in Ross-shire it had been deemed to be winnable only by the ever-growing Vics (soon to become Ross County). With their win, the Saints had made their mark as a footballing side and offered a reminder of talent outside of Dingwall.

Indeed, for that moment in 1925, Saint Duthus were the best junior football club in the North.

In just four years, triumph turned to tragedy, with the untimely passing of Hugh Macleod in 1929. Hugh, or “Uisdean” as he had become known when he resided in Tain, was the son of ex-Baillie Donald Macleod and after leaving Tain Royal Academy in 1926 he travelled to Edinburgh to study medicine.

At the time of his leaving he was just eighteen and even at such a young age he had been a standout for Saint Duthus as part of the young North of Scotland Cup winning team in 1925. With his football abilities and strong build, it came as no surprise that he had won the admiration of football scouts while playing for his university at an academic level.

Before long he had won a contract with Queen’s Park football club in Glasgow – then one of Scotland’s few remaining top-flight amateur clubs. He played regularly for the Queen’s Park Strollers (the reserve team) before earning his place at left back for the first team in 1927.

In a letter to the Ross-shire Journal during his first season with the “Queens”, he was noted for his ability. The following describes his efforts during a match against Motherwell:

“He displayed great power of kick and was rarely beaten by the redoubtable Stevenson-Ferrier wing. The play of Macleod was a feature of the game. He has a fine sense of covering up his partner and saved a certain goal under the bar when Harkness, the goalkeeper, was drawn out.”

His abilities were such that he was called up to the Scotland amateur International eleven for a match against England at Hampden Park on April 19th, 1928 – only the second of its kind. Playing alongside seven of his Queen’s Park comrades, Scotland recorded a 3-2 win over their long time rivals.

Soon after, injury befell Hugh during a match against Hibernian, forcing him to take some time off to recover. During this time he was also taking his 4th year exams, battling what he believed to be a chill, and finished his term before returning to Tain for his Christmas holidays. It was then that he was unexpectedly struck down with Rheumatic fever.

What had initially manifested itself as a “chill” weeks before had eventually worsened and within days he had succumbed to the illness and died.

As reported in the Inverness Courier in February 1929:

“The Queen’s Park directors heard of the sad news shortly after the start of the match against Airdrieonians, and immediately the flags were lowered to half mast. Quiet and modest, he was a likeable young man and a great favourite amongst his associates. A brilliant career had been cut short by his untimely death, and the greatest sympathies to his sorrowing father and mother.”

Although only twenty-one at the time of his death, it could certainly be argued, having played in Scotland’s top division and having been capped for his country, that Hugh Macleod was probably the most successful footballer to ever come out of the town of Tain.