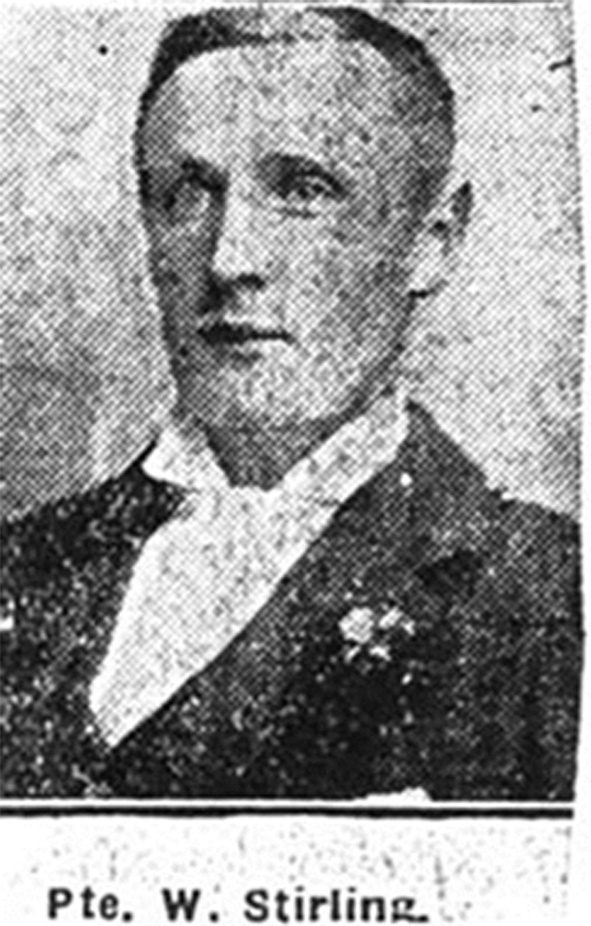 The Medals of William Stirling, Lamington, Kildary by Katherine De-Jonckheere

Many households have tucked away in a box or in a drawer, somewhere in the house, a set of World War 1 medals earned by a Great Grandfather or distant Uncle. Occasionally, for many reasons, these leave the family and enter the public domain. This was the fate of William’s medals sold at an auction house as three sets of medals to brothers. What is the possibility of three brothers in one family all being called William?

Access to many records online revealed an interesting story. William Stirling was born on the 23rd of December 1887 to William and Isabella Stirling in Aberdeenshire. The family relocated to Lamington where the whole family were employed in the local mill. William (junior) himself being a spinner of tweed when he enlisted for the Boer War. William was a tall man only half an inch short of six feet with blue eyes and fair hair. His conduct is given as very good and he only blotted his copy book a couple of times for being drunk and in possession of beer.

Whilst serving he had the misfortune to be wounded, not by the enemy but when he was acting as a marker during rifle practise and a shot went straight through the target and hit him in the wrist. A formal enquiry found that William was in no way to blame for the accident.  Despite this, life in the army suited William and he remained with the Colours and served in India before entering the Reserves in 1907.  By 1911 he had served his time with the Reserves but reenlisted little knowing that a major conflict was about to be unleashed upon the world.

William was mobilized at Fort George on the 5th of August 1914 and proceeded to France on the 23rd and in less than a month, on the 3rd of October, he was severely wounded with a gunshot to his left hip at Frelinghien, a town just inside the French Belgian border. After spending some time in hospital and being posted to Cromarty for light duties he was discharged from the army on the 13th of February 1916 as being no longer fit for service and was granted a pension. For his service, he was awarded the first group of medals.

But what of the next group named to 4964 Pte William Stirling, Lamington who served with the 5th Seaforths.  The Commonwealth Graves Commission record him as having died on the 22nd November 1916, aged 41, son of William and Isabella Stirling of Lamington, Kildary?  Another son William?

The answer was to be found in an article in the Ross-shire Journal,

“…….His wound again gave trouble, and he was removed to hospital at Cromarty. After being there for some time, he was discharged as unfit for the Army, and was granted a pension.

Afterwards he made a fair recovery, and being determined to get back to the front, he re-enlisted in the Seaforths, and was at once drafted off on active service. As recorded, he received his death wound on 21st November, and succumbed in hospital at Boulogne on the 24th. Much sympathy is extended to the widowed mother in her sad bereavement. Other two of her sons are in the Army, Walter and David.”

William re-enlisted and paid the ultimate price hence the second set of medals belongs to the same man and not a brother. Sadly for his mother Isabella, David also died on the 13th October 1917 and Walter on the 7th of April 1918. All three brothers are on the Logie Easter War Memorial

The mystery as to who owned the final William Stirling medal was answered by the 1911 census where a grandson William Stirling is living with the family at Lamington and who would have been of age to fight by 1916.