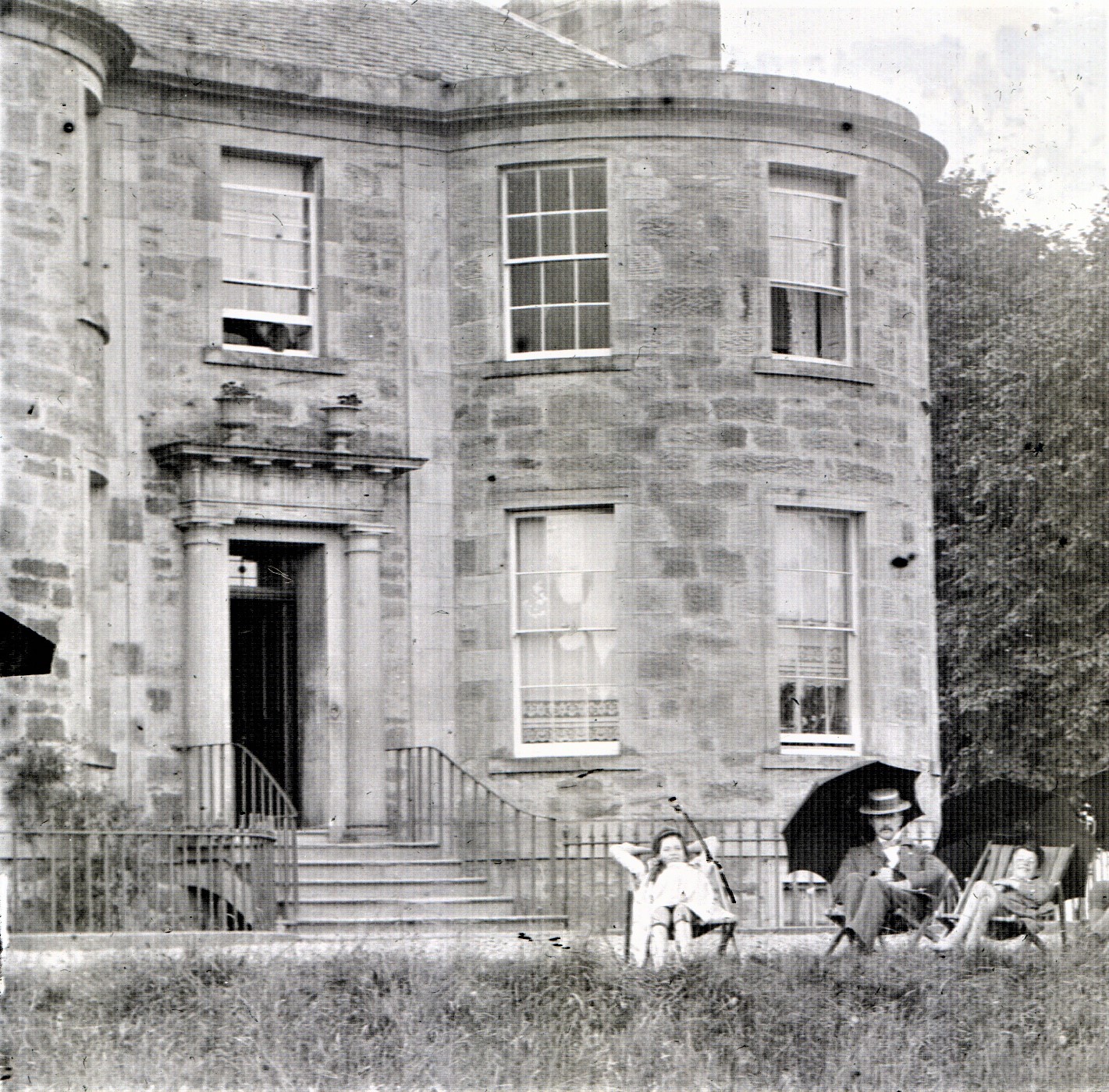 The diary gives a brief glimpse into the life of a 16-17 year-old girl of the professional classes in the mid-19th Century.

Elizabeth Taylor was the daughter of Robert Sutherland Taylor who was then Sheriff Clerk of Sutherland, living at Knockbreck House on the eastern outskirts of Tain.  During the day, her life consists mainly of visiting friends (contemporary and older family friends) both by herself and with “mama” and occasionally with “papa”.  The 1851 census records the children as being “scholars at home” and that the household included a Governess.

There is much evening social activity as well.  She receives invitations, often on her own account, to dine at the houses of friends, attend parties or “drink tea” - the latter sometimes involving more than the phrase would suggest, at least on the 22nd July – “I drank tea with Mrs McLeod; a large party of 15 and plenty of dancing & music.”   Friends of the family or business acquaintances of her father frequently dine with them and Elizabeth herself issues invitations to friends to dine at Knockbreck.  During the short period covered by the diary [1st January-17th August, being the only part to come to light so far], they have several friends or relatives staying with them for a few days or longer and Elizabeth herself has extended visits to Coul and Cromarty.

When not visiting, and otherwise socialising, she spends her time on needlework projects (19th January – “I finished the centre of my braided cushion”), and reading – books and “The Lady’s Newspaper”.  She takes an interest in the house plants and the garden and attends evening lectures with other members of the family on such subjects as “The advantages of Literature” and “Printing” – no social media in those days!   Her only exercise seems to be walking - people generally seem to do quite a lot of that.  Wheeled conveyances seem to be used for longer journeys only.  Any outings into Tain and in its immediate vicinity seem to be on foot – even visits to places like Rosemount unless they call in on the way home from a more distant excursion.  In the winter her brothers skate at Tarlogie [presumably on the curling pond there] but Elizabeth does not seem to participate.

The diary also gives us an insight into various aspects of Tain and the surrounding district and its people.   An interesting fact is that Old Christmas day (5th Jan) and Old New Year’s day (12th January) were still being observed in Tain.  On 11th January, Elizabeth writes, “Tain crowded with people today all preparing for the New Year.”  It would seem the Poor House (opened c.1850) was regarded as a “visitor attraction” along with the “Old Church” (presumably the Collegiate Church), the Academy, the Court Rooms, the jail and the market/fair.

The family visited and were visited by a Mrs Leith.  This is undoubtedly the Barbara Leith, widow, who in the 1851 census is recorded as a “Teacher, Ladies School” living at No. 3 Esther Row (now called Esther Place).  Also included in the Leith household is a “Governess/Assistant Teacher” and 4 boarding Scholars, 3 of whom were sisters born in the West Indies.  Like the Academy in Tain, Mrs Leith’s establishment attracted pupils from out with the Tain area.  In this case the 3 sisters were probably children of a plantation owner.  Indeed In the 1853 diary we learn that a cousin of Elizabeth’s, aged 9, was boarded with Mrs Leith.  Her father had a plantation in Granada.  The Inverness Advertiser, 7/10/1856, contains a report of Mrs Leith being presented with a gold watch, having been a teacher in Tain for 19 years.

Tain doctor, Dr William Baillie Ross, and his family were friends of the Taylors as well as his being their doctor.   Their daughters, Bessie and Alexa, were special friends of Elizabeth Taylor.  As well as social visits, Dr Ross visited several times in his medical capacity mainly to attend to Elizabeth’s little brother Innes who, shortly before the diary ends, was diagnosed with Rheumatic Fever – “the poor child is in great pain”.  Other people Elizabeth and her family were on visiting terms with included the Murrays of both Rosemount and Geanies; Mr & Mrs Crawford Ross – he was the tacksman for Cadboll for 30 years; Sheriff Cameron, Dingwall; the Munros of Allan; Ross of Glastullich.  However, a list of all the people who feature in the diary amounts to a “Who’s Who” of Tain, Easter Ross and parts of Sutherland.

The diary has several references to ferries, especially to the Cromarty Ferry, indicating their importance as a means of communication.  They were usually used if someone had to travel south.  There are several references to gates usually using capital letters – Calrossie Gate, Hartfield Gate, the Gate at Allan.  There was a “Toll House”, a small cottage at the south entrance to the town just beyond Knockbreck House, built for the toll keeper on the turnpike road linking Tain with Invergordon and ultimately Inverness.  The turnpike was a barrier across the highway enabling tolls to be collected.  Later gates were used.  The cottage is still there but it and the surrounding site were taken over as a depot by the council road department and the site is still used for storing road materials, salt and grit etc.  Types of conveyances mentioned – horse, dog-cart, noddy, Phaeton, the Clarence, mail coach; boat (17th June – “Papa sailed this morning from Invergordon for Edinburgh where he is to remain a few days on business”.)  The railway didn’t reach Tain until 1864.

Although the family were members of the established church, whose minister was the Rev. Lewis Rose, they also regularly attended, on the same day, the United Presbyterian Church whose minister was the Rev. Robert Ferrier.  Elizabeth’s family visited and were visited frequently by members of the Ferrier family.  It is highly possible that, although not mentioned in the diary, the family was related to the Ferriers as an inscription on a stone in the Old St Duthus Cemetery gives the name of his spouse as “Elizabeth Taylor” – the same as the young author of the diary.

The 16th June is recorded as Elizabeth’s 17th Birthday, for which she received “a handsome blue muslin evening dress” from “Mama”; her “first ring” with pearls and rubies from “Papa”; A “bottle of rare perfume” from her older brother William; a “beautiful brooch, cornelian set in gold with a forget-me-not on the stone and six emeralds on the top for the flower” from Mr & Mrs Ross.  The next day saw her at the dressmaker in Tain, a Miss Finlayson, “getting my new blue muslin fitted”.  Visits to the dressmaker were quite frequent.  Most garments were made from material purchased by themselves then taken to be made up to order rather than “off the peg” clothing.

On her mother’s side there was a connection with Poyntzfield House, which no doubt explains an excursion made on the 4th August when the family “went over to Poyntzfield to see the hay stack made” crossing on the Invergordon Ferry.  It was quite a social occasion and they were joined by other relations and acquaintances –“in all 40 sat down to a picnic at the burn.”