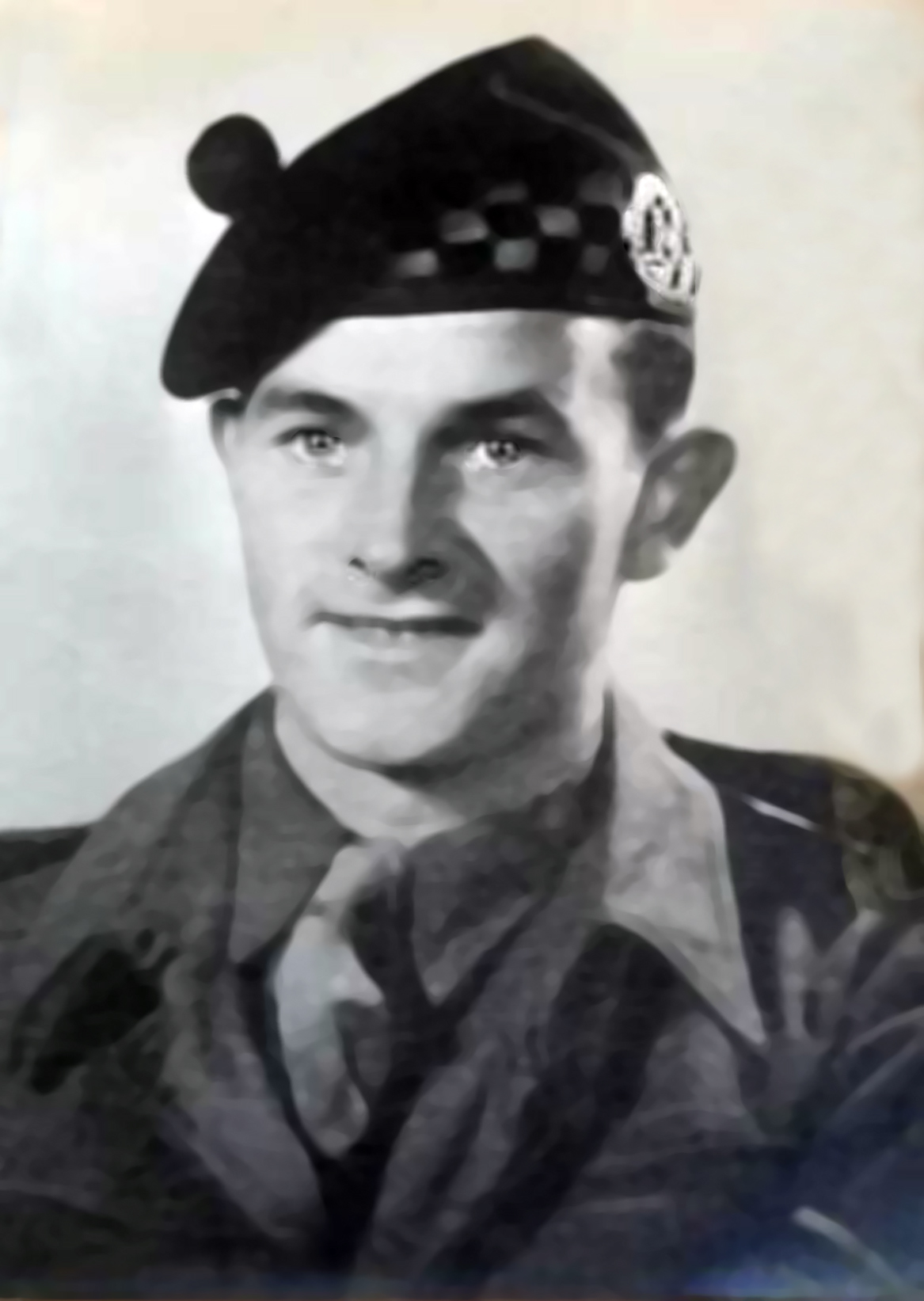 A brief insight of our dad’s life as a Lovat Scout and memories shared. Written by Alistair, Patricia, Valerie and Caroline.

Born in a small cottage on the shores of Loch Eye, Lance Corporal William Peter Nicolson spent much of his early life in Ross-shire. He schooled in Tain and Alness, leaving prematurely upon the untimely death of his father in November 1937. A family orientated man he did so to seek employment to support his mother, sisters and younger brother who was visually impaired. From a farm working background he worked for a period of time as a Gamekeeper Assistant. In February 1938 Lance Corporal Nicolson joined the Territorial Army to boost his earnings and served there until his transfer into Squadron A of the Lovat Scouts Army in September 1939 – Army Number 318123.

Initially, Lance Corporal Nicolson served on the Faroe Islands doing valuable work to protect vital fishing supplies and the British Isles from German invasion from the north. He was very young and while there was befriended by a local family. In return for teaching their young son English, he learned to speak fluent Faroese. Many years after the war he would reconnect with the same young boy, now a grown man himself, at a Scout reunion.

Following service on the Faroe Islands, the Scouts returned home and participated in important activities such as guarding the royal family at Balmoral. By the winter of 1943 the decision was made to develop a Mountain Division. The hardy highlanders, used to the hills, were considered ideal due to their experience as deer stalkers and ghillies. Some went to Wales to train as rock climbers, others to the Canada to train as ski mountaineers. Lance Corporal Nicolson was posted to Jasper National Park, where he was involved in gruelling training. Intensive ski training initially; thereafter glacial work, snow craft, avalanche craft, and ice and winter rock climbing. The squadron was also involved in patrols of over 60 miles without tents. Climbing to elevations of over 10,000 feet they often trained in temperatures as low as minus 30 degrees. While there, Lance Corporal Nicolson was one of several Lovat Scouts who saved some of their comrades from avalanches. He spoke little of this time and we understand not all of the Scouts were fortunate enough to survive either the avalanches or the training. However, by this time the Scouts were considered the toughest and hardiest in the British Army.

The Scouts departure from Canada was delayed by four weeks due to an outbreak of suspected Scarlet Fever. Once out of quarantine they went to Italy. It was here Lance Corporal Nicolson proved himself to be a brave and capable soldier. On the 14th July 1944 he was assisting with the movement of army vehicles over a Bailey bridge near Castiglione Fiorentino. The bridge came under very accurate and heavy shell fire and ignoring the danger he continued with his duties. Some of the drivers sought to take cover however Lance Corporal Nicolson realised quickly that a serious block of movement of the troops would result in them being exposed and in full view of the enemy. It is described in his resulting Mention in Dispatches that “with great calmness Lance Corporal Nicolson went down the road and ordered each driver to return to his vehicle and proceed on his way. In this way he got the whole column moving again. By his example and total disregard of danger he kept the traffic flowing and undoubtedly prevented a situation that would result in heavy loss of life and transport. The bridge continued under heavy fire throughout the tour of his duty”.

Lance Corporal Nicolson was in Greece by the end of the second world war. He used to tell family, with some degree of humour, how he and several of the squadron were ‘locked up’ in a jail in Salonika (now Thessaloniki) for their own safety due to their celebrations. To the contrary of the impression this gives and on discharge from the army in 1946 Lance Corporal Nicolson’s Soldiers Release Book read as follows: “This man joined the regiment as a territorial before the war and has served with it continuously ever since. He served for two years in Rifle Platoon where he became a first rate, intelligent and hardworking soldier. Later, he served for a further two years in the Intelligence Section where he did valuable work. Latterly, he returned to Rifle Platoon where he soon became Section Leader. He is entirely honest, sober and trustworthy and has made a good and conscientious NCO. He wants to get into the Metropolitan Police Force and is very strongly recommended. Military Conduct: Exemplary”.

Lance Corporal Nicolson achieved several medals and awards during this time: The 1939-45 War Medal. The Defence Medal, The Italy Star and the Efficiency Medal to name a few.

In fact, Lance Corporal Nicolson did not join the Police after the war. On his return to the highlands, he spent some time recuperating from malaria in the Lord Roberts Workshop in Inverness. It was from here he went to Craig Dunain Hospital to train as a registered mental health nurse. He also trained as a registered general nurse in the Royal Northern Infirmary, Inverness. He would later spend some time studying at Battersea College of Technology, where he qualified as a nurse tutor.  During this time, he met his wife Evelyn and they had four children. They stayed firmly together until his death in January 2002.

Lance Corporal Nicolson was a much-loved and very well-respected Principal Tutor of Psychiatric Nursing. He worked at Craig Dunain Hospital then moved to Woodilee Hospital in Glasgow where he was ‘head hunted’ for the Principal Tutor position for Perth College of Nursing. He was described by friends, colleagues and students as a gentleman and a gentle man. Much of what his family now know about his time in the Lovat Scouts was not spoken about or made public to others until his retiral farewell. A colleague who had researched his time in the army, spoke of it then.

Lance Corporal Nicolson’s surviving family would like to finish this account of his life by sharing their own memories:

Alistair: “I remember playing football and cricket with Dad as a young boy and later badminton and bowls. When I bought my first car, we used to spend time tinkering with the engine. Following in his footsteps into nurse education I often reflect on his ability to always say and do the right thing. He was the kind of man people would, and often did, turn to.”

Patricia: “Dad was my rock, my voice of reason. With his calm nature he always put things into perspective. I recall him helping me with my homework and patiently explaining things I didn’t understand, especially science! He was always there for us and supported my decision for an alternative career to nursing, keen we made our own choices.”

Valerie: “I remember Dad’s calmness and patience the most. He was always there when I needed him. I also followed him into nursing and was always steered in the direction of learning for myself. He instilled values of hard work, honesty and a respect for and consideration towards others.”

Caroline: “I remember Dad brushing my long hair dry in front of the fire and pleating it afterwards. Also following him into nurse training, I remember he would point me in the right direction to learn for myself rather than tell me what I wanted to know as he did not want us to get where we were going simply because of who he was. He had integrity!”

We hope you have enjoyed this account of our dad’s life. We miss him and think of him every day. More than anything we are proud of him and honoured to have been his children.