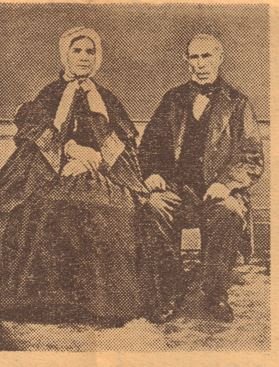 A wee story we uncovered after re-erected the long-fallen gravestone of George and Ann Mackenzie last week.

My grandfather, George Mackenzie, was born and brought up on the estate of Invercarron, in the parish of Kincardine. He was known as “Seoras Muilleir” (George the Miller) from the fact that his father had been the meal miller in the parish. My grandfather, however, had a greater reputation as a smuggler than a miller; and the "bothy" "Seoras Muillier ' was always known to produce the best whisky in the parish.

As a result of evictions in the Invercarron estate "Seoras Muillier" and his family were compelled to remove to Tain, and he remained there until his death, about forty years ago.

"Seoras" lived to the great age of 95, and was active to the last. He was an expert in the making of beehives and potato baskets, which he took up originally as a hobby; and he continued working at these until he was over ninety. He procured all the materials necessary for the manufacture of these articles (juniper roots for the baskets and bent grass for the hives) from the Mhorrich Mhor, near Tain; and Tain people used to remark on the extraordinary spectacle of an old man of ninety wading across the River Tain with his burden on his back after a hard day's work.

As a boy I used to sit with him at nights, listening to his tales of "long ago." He told me of a marriage he had attended where there was only one knife at the feast. All the guests had to butter their bread with their thumbs; and he used to add, "A piece was never so sweet as when you buttered it with your own thumb."

"Seoras" was well over twenty before he wore boots or shoes that were rights and lefts. Both boots were then alike and could be worn either right or left. When "Seoras" was courting my grandmother (who was then a maid in the family of Captain Grove at Invercarron House) he considered himself a bit of a beau with a new pair of elastic-sided boots. Miss. Grove once remarked to my grandmother, Ann, “Seoras has very neat feet, if you could only get him to put on boots that were right and left."

After that "Seoras" did so.