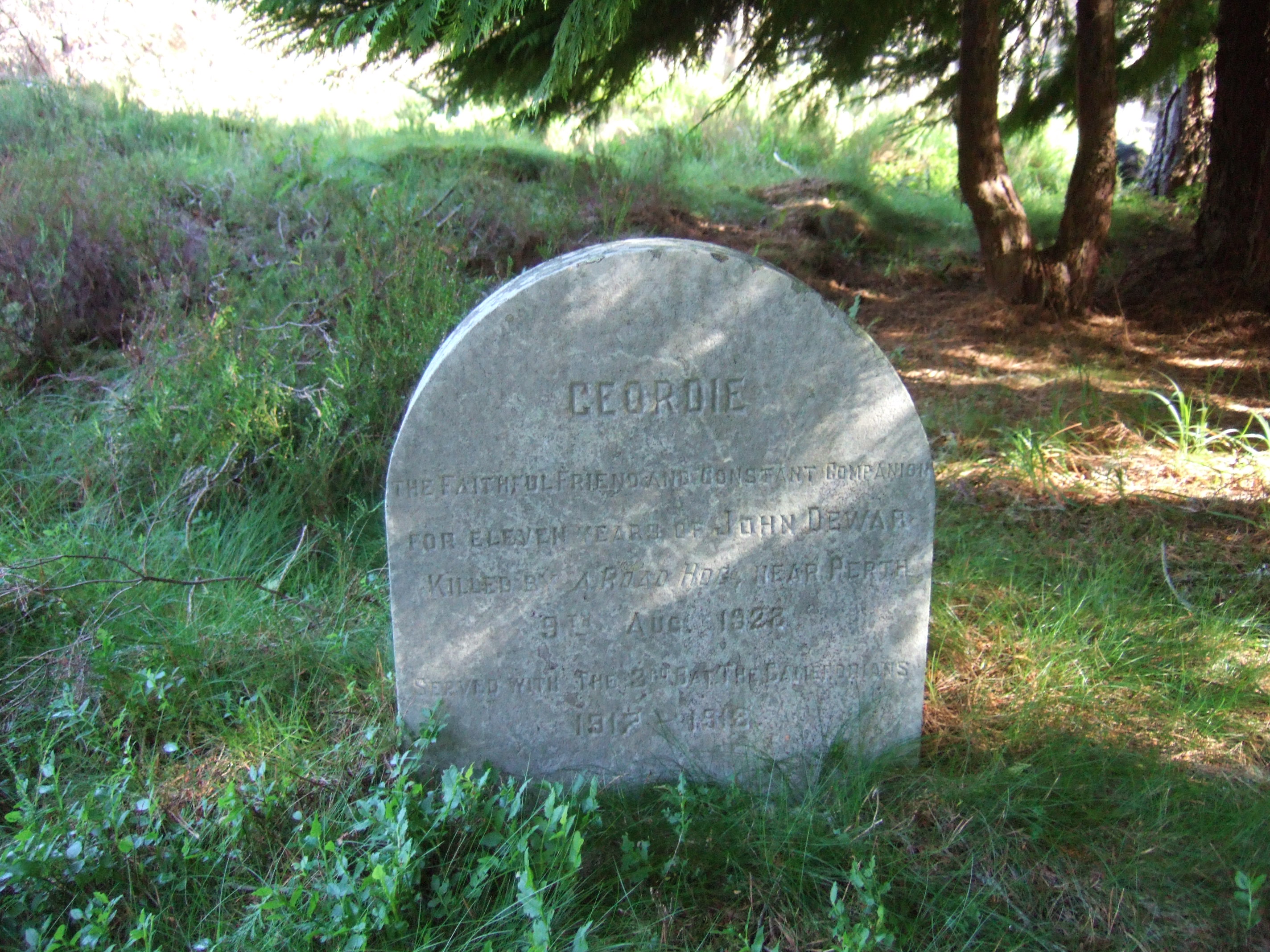 A dog's memorial and the story of his master and the latter's connection to Tain and the Seaboard Villages.

Deep in the Morangie Forest, a few hundred metres north of the site of Culpleasant and near the junction of the forest road leading to the ruin of Causewayend and another road that swings uphill to the north, is a lonely gravestone sheltered by a line of cedar trees.  In more recent years a finger post has been erected beside the wooden shelter at the second bridge on the Aldie burn trail indicating the direction to follow.  The stone bears the following inscription:

The Faithful Friend and Companion

for eleven years of John Dewar

Killed by a Road Hog near Perth

Served with the 3rd Bat. The Cameronians

Geordie’s master was Captain J B W Dewar, Harperfield, Sandilands, in Lanarkshire.  All that is known about Geordie is what is written on his gravestone but he was probably either a yellow or black Labrador, as Captain Dewar owned both of these at one time.  He was obviously devoted to his dog when he saw fit to erect a stone to its memory and also must have been fond of this area as he chose to erect it here, although the dog was actually killed near Perth.

Among the anecdotes of late founder of Tain Museum, Rosemary Mackenzie, is the following referring to John Dewar - “he was a bit of an eccentric having been shell shocked during the war (Captain in the Cameronians) and was thus unable to participate in the family business (Dewar’s of Perth, Whisky Distillers).  He was given a sum of money by the family.”

As yet I have not been able to verify this information but according to May Munro, whose father worked at the Royal Hotel and to whom I spoke personally, John Dewar came to the Tain area frequently for weeks on end for shooting and while here would stay part of the time at the Royal Hotel and part of the time at a cottage located near to where the dog’s grave now lies.  He became very much involved in Tain and also the Seaboard Villages and was a great benefactor for both communities throughout a number of years.

In February 1927 he became President of Tain Golf Club and presented a cup, named the Dewar Cup, to the club for the Club Championship.  It was later reserved for the Ross-shire County Championship which in the early years was always played in Tain.  In more recent years it has gone on circuit of various Ross-shire clubs but is still the premier award and has been won by many Tain golfers.  He gave donations to, and was a committee member of, Saint Duthus Football Club for most of the 1920s.  Tain Men’s Club also benefitted and were presented with a Billiards Shield Trophy for annual competition.  This was competed for from 1933 to 1949 and is now part of the museum collection.

However, his generosity and interest in Tain extended beyond sport.  The museum has a letter, dated 29/12/1924, from John BW Dewar, Harperfield, Sandilands, Lanarkshire, to William Ross, Provost of Tain, in which he had enclosed a donation for the benefit of any needy Tain resident at the time of the New Year celebrations, saying he hoped to visit Tain and mentions his many happy days in the old town.  In June 1928, his name was added to the list of Patrons to the Tain & District Nursing Association.  No doubt there were other similar instances for which we don’t have a record.

As already stated, John Dewar’s interest extended beyond Tain to the Seaboard villages, being involved with the Balintore Boys’ Football club.  Thanks to Niall Harkiss’s research (for his book “Ross-shire Football’s Forgotten Pioneers”), we have the following details of the extent of his involvement.  He introduced a football tournament for school children.  The tournament became a regular summer spectacle and by 1928 even Academy teams from Dornoch and Tain were taking part.   About 1931 he donated a patch of ground, to the east of Hilton, furnished with a new set of goalposts and provided brand new strips, blue and white.  In 1932 the club became the Seaside Swifts formed from the Balintore, Shandwick and Hilton districts.   It took part in the Ross-shire Junior League and lasted 5 years.

Again his generosity extended beyond football.  The following is an extract from the Ross-shire Journal, dated 11/9/1925 – “Monday was Gala Day in the fishing community of Balintore and Hilton. Captain J B W Dewar, Harperfield, Sandilands, Lanarkshire, who was holidaying in Tain, organised a Boat Race among local fishermen and offered a handsome Silver Cup for competition.”  By 1928 this had developed into a “Regatta” with a wider programme of aquatic sports with Captain Dewar as convener and donating generous prizes.  Also he is recorded as having donated coals and groceries to 30 of the villages’ poorest people to the value of 10/- each during one winter of severe weather conditions.

And not just Easter Ross, even Canada was a recipient.  The following information was found on-line - an original oil on canvas painting entitled “Ghosts of Vimy Ridge” by Will Longstaff, showing the site of a victory by the Canadian Corp, April 1917, during WW1, was donated to the people of Canada by Captain John Dewar in 1931.  Whether “eccentric” or not, he was a truly remarkable man who deserves to be better known in Tain and District.  The remote gravestone is not only a memorial to a faithful companion but to its master, a man who was a true friend of Tain and the Seaboard Villages.