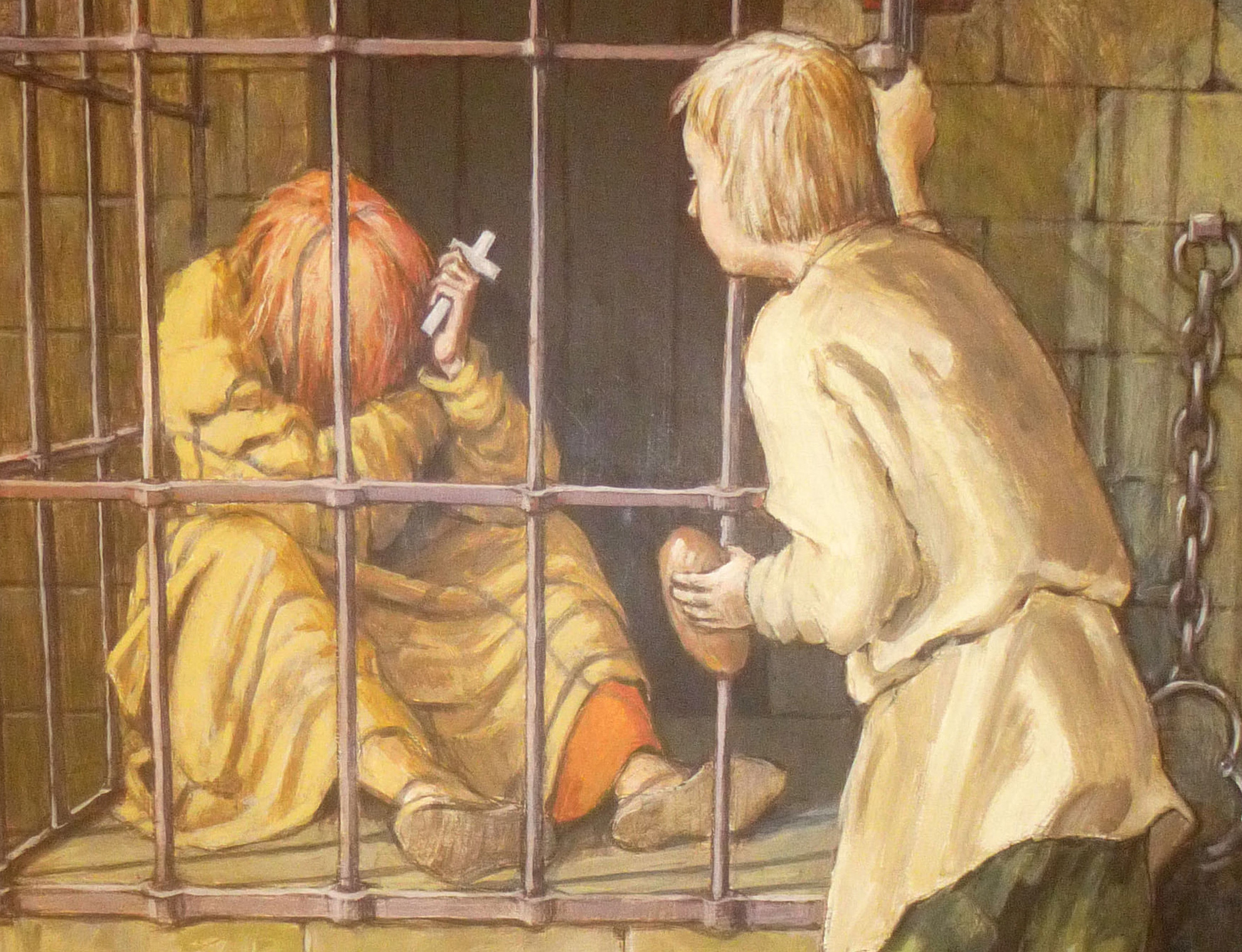 With his family still imprisoned in England his sister Mary still being held in a cage, King Robert met with their captor Earl William, at Auldearn, on the last day of October 1308.

"Let her be closely confined in an abode of stone and iron made in the shape of a cross, and let her be hung up out of doors in the open air at Berwick, that both in life and after her death, she may be a spectacle and eternal reproach to travellers."

These were the orders from King Edward I of England after hearing of the capture of Isabella MacDuff the Countess of Buchan. She had been taken prisoner in the “Girth of Tain” by William the Earl of Ross, along with King Robert's wife, daughter and sisters. The countess was imprisoned in a cage at Berwick with the Kings sister Mary suffering a similar fate at Roxburgh castle.

With his family still imprisoned in England and Isabella and Mary Bruce still being held in cages, King Robert met with their captor the Earl of Ross, at Auldearn, on the last day of October 1308. The following translation records the, perhaps surprising, outcome at what must have been a very tense meeting.

"To all Christ’s faithful to whom notice of the present letter shall come, William, earl of Ross, sends eternal greetings in the Lord. Because the magnificent prince the lord Robert by the grace of God king of Scots, out of his innate goodness and inspired mercy and special grace, has remitted to me purely his rancour of spirit and loosed and forgiven me of all manner of transgressions of offences against him and his men by me and my men perpetrated prior to the making of the present letters, and graciously granted all my lands and tenements [to me], and, notwithstanding, has undertaken to invest me heritably in the lands of Dingwall and Ferincoskry† in the earldom of Sutherland by his benign generosity; I, attending carefully to the benevolence of such a great prince, and desiring to demonstrate henceforth, worthily and duly, for all the graces made to me, my gratitude in return as far as my ability, subject and bind myself and my heirs and all my men to my said lord the king in all circumstances [... ... ...] towards his royal dignity that we shall be faithful to him and his heirs henceforth, and faithfully [give] service, aid and counsel [... ... ...] against all men and women who may live or die. And upon this I, William, for myself and all [my heirs and] my men, voluntarily, [with joined] hands, made homage to my lord king, and performed [an oath] upon God’s holy Gospels [... ... ...]. In testimony of all of which my seal and the seal of Hugh, my son and heir, and John, my son, along with the seals of the venerable fathers the lords David [de Moray] and Thomas [de Dundee], by the grace of God bishops of Moray and Ross, were appended to the present letters. Done, written and given at Auldearn in Moray on the last day of October in the third year of the reign of our lord King Robert. Witnesses the venerable fathers aforesaid, Sir Bernard, the king’s chancellor, Sir William de Hay, Sir John Stirling, Sir William Wiseman, Sir John de Fenton, Sir David de Barclay and Sir Walter de Barclay, knights, Mr. Walter Heroc’, dean of the church of Moray, Mr. William de Cresswell, precentor of the same church, and many other nobles, clerics and laymen assembled on the said day and place."

William was given easy terms, getting all his lands with the additions of Ferincoskry (Creich) and the burgh of Dingwall and its castle. King Robert ties the Rosses to him with offers of land and also marriage, Hugh the earl’s son later marrying Maud, King Roberts’s sister.

The Earl of Ross was now firmly on the Bruce side and he would send his men to fight at the decisive battle at Bannockburn in 1314, his son Sir Walter Ross is one of only two knights recorded to have died fighting for Bruce at Bannockburn.