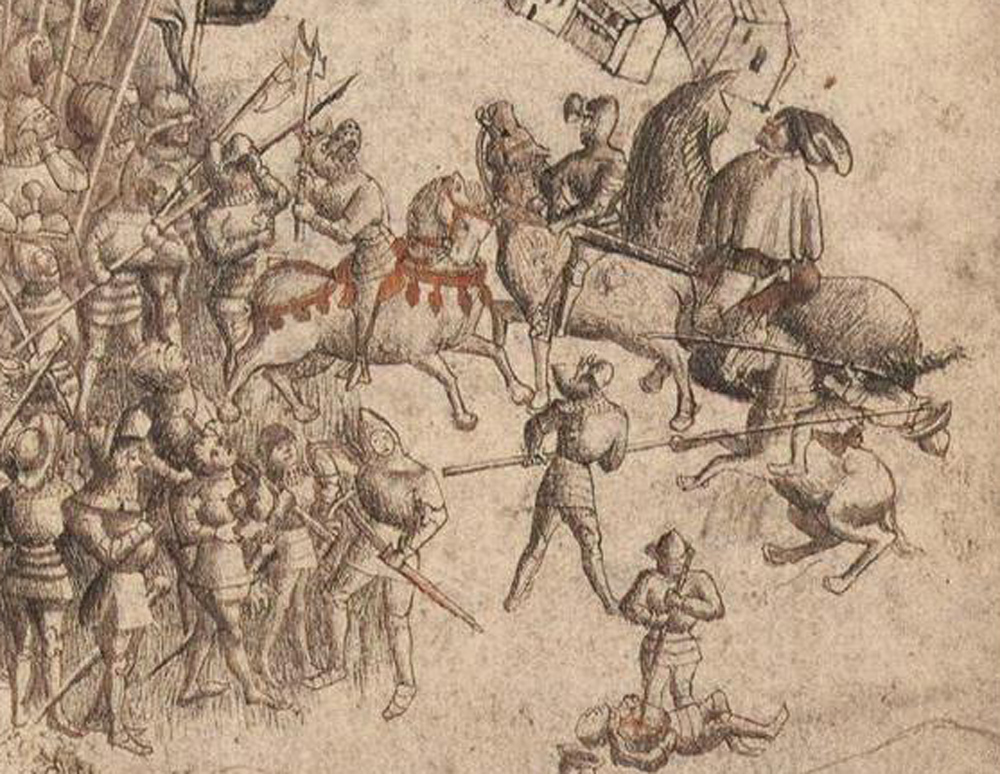 The death of Walter Ross at Bannockburn.

On the 23rd and 24 of June 1314, Scotland won its most decisive victory, during the 1st Wars of Scottish Independence, at the famous Battle of Bannockburn. The epic 14th-century epic poem ‘The Brus’ by John Barbour states that over two hundred sets of spurs were taken from English knights that were killed at the battle but on the Scottish side only two men that died were mentioned;

“And apon Scottis mennis party
Thar wes slayne worthy knychtis twa;
Wilyhame Vepownt wes ane of tha,
And Schir Walter the Ros ane othir,
That Schir Edward, the Kyngis brothir,
Lufit, and held in sic dante
That as him-self him lufit he.
And quhen he wist that he wes dede,
He wes so wa and will of rede,
That he said, makand full evill cher,
That him war levar that journye wer
Undone, than he swa ded had bene.”

The two worthy Scottish knights were Sir William Du Pont and Sir Walter Ross. Barbour’s poem then goes on to say that when Sir Edward Bruce, the Kings brother, heard of Walter’s death he cried and wished the day was lost so that Walter may live. The friendship between Sir Edward Bruce and Walter Ross is an unlikely one for although after 1308 the Ross’s became stalwart supporters of King Robert, this was not always the case.*1

Walter’s father, William the Earl of Ross had endured six years of imprisonment at the Tower of London after his capture at the Battle of Dunbar in 1296, only being released in 1303. Records tell us that Walter was at Cambridge as a student in 1308 and it is likely that he had been sent to London to ensure Earl William’s good behaviour on his release.

When Walter managed to return north to Scotland is not clear but it is possible that Edward and Walter’s friendship began in the courts of the English King Edward I, where Edward Bruce had spent time as valet to the Prince of Wales. Sir Edward Bruce also granted Walter a gift of land in Galloway*2, suggesting that Walter could have been with Edward during his successful campaign in Galloway in 1309. Walter’s brothers John and Hugh Ross were likely to have also taken part in the fighting over the two days of the Battle of Bannockburn, leading the men of Ross in the Schiltrons that inflicted so much damage on the English forces.

Hugh Ross only a few years later was killed wearing St Duthac’s Shirt at the Battle of Halidon Hill in 1333 and it makes it very likely that one of the brothers was wearing the Holy Relic of the shirt of St Duthac at the Battle of Bannockburn.

1. Soon after King Robert’s coronation in 1306, William the Earl of Ross infamously captured Robert’s wife, daughter and sisters in the sanctuary of St Duthac at Tain and handed them over to Edward the 1st of England, condemning them all to years of hardship. Robert’s sister Mary and the Countess Isabella of Buchan imprisoned in cages at Roxburgh and Berwick castles.
2. https://www.poms.ac.uk/record/source/10476/
This depiction from the Scotichronicon (c.1440) is the earliest known image of the battle.
Corpus Christi College, Cambridge.