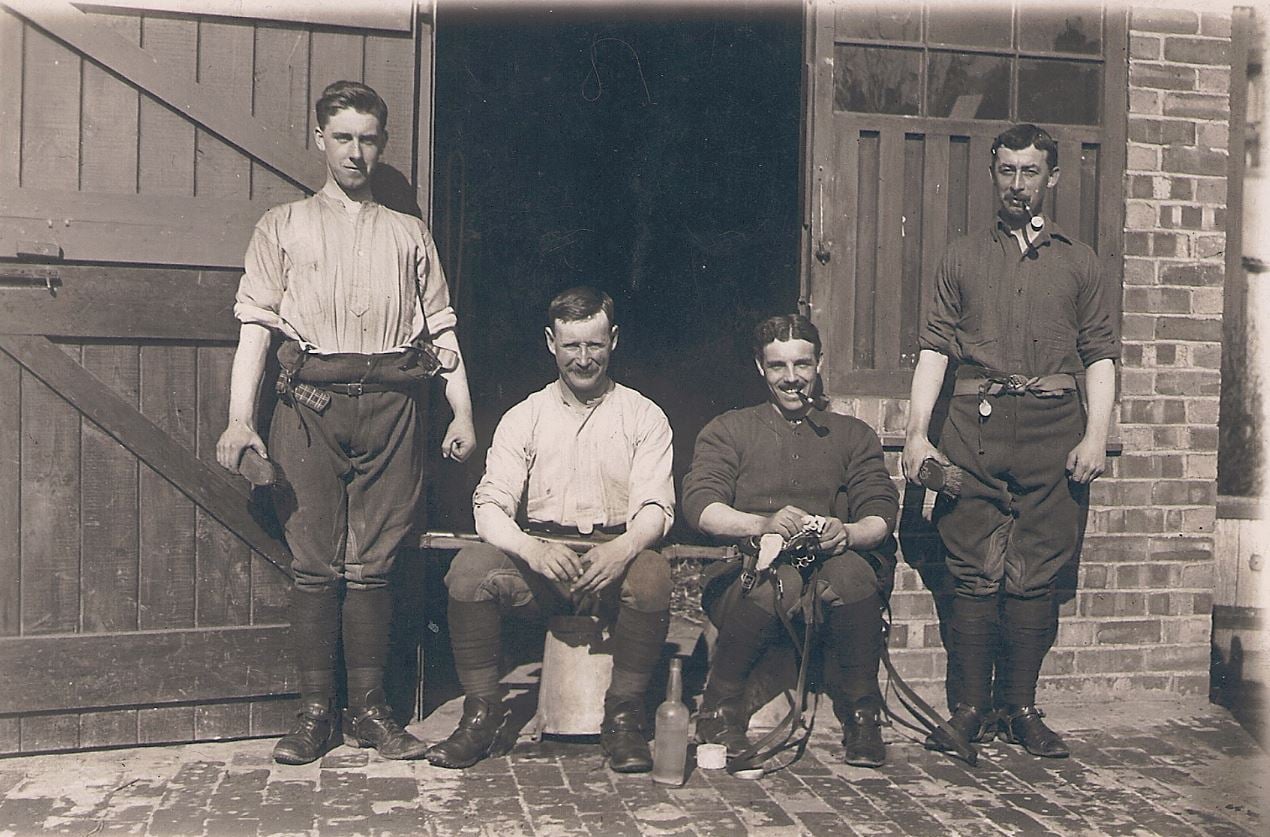 Land Raids on Nigg Hill after local soldiers demand the government give "land to its defenders."

In 2014 when the museum was researching the Tain War Memorial, one of the items we researched, now on display in the museum, is a rather plain old ledger book titled, Old Age Pensions - Duplicate Letter Book. The book contains copies of over one hundred letters from W J Munro, Secretary of the Local Pension Committee, seeking Government help for ex-servicemen and their families suffering from hardship due to the war. For this work, Mr Munro was awarded an O.B.E

I picked out the following story as an example for our display and started to research the men to see what I could find out. I uncovered this remarkable story, which was far too big to fit our display but I think it deserves to be told.

I return all the papers in this case which came again before my Committee yesterday – Miss Budge was at the meeting & was able to explain the whole circumstances. – There was no dependence in this case since discharge, & could not possible be, for the simple reason that the soldier had lost a leg & could not work. The committee noted that if he had a wife & family allowances would be granted during the period of training and they quite understood that unless exceptional circumstance’s prevailed this privilege did not extend to the father and mother. In many respects this is an exceptional case, Miss Budge explained that the father was a decent hard working man, getting now advanced in years,  both sons had been hopelessly wounded and living at home after their discharge. In the circumstance, the sub-committee were of the opinion that if anything could be done in the way of bringing a little extra comfort into this home it would be well deserved.

The letter highlighting the plight of the Macrae family seemed perfect for our display. With two seriously wounded sons at home in the care of their elderly parents who had no income. I was keen to find out more, a quick search on the internet  took me to the Ross and Cromarty Heritage website where I found the following article from the newspaper and photographs of the two brothers from Rarichie;

"Private Duncan Macrae mobilised with the Lovat Scouts on the outbreak of war, and proceeded overseas with his regiment in September 1915. He saw much active service at Gallipoli, Egypt, and elsewhere. He was severely wounded on the 6th December 1916, and after lying in a base hospital for a considerable time, was transferred to Malta, where he still is. Pte. Macrae has been operated on several times with some success, but is not yet able to get up. His letters home are always cheerful, and he expressed delight with the kindness of the nurses.
Duncan’s younger brother, PTE. Alick Macrae has been on active service with a Seaforth Territorial battalion for more than a year. He went to France in November 1916 and was severely wounded on both legs at the great advance on 9th April. He is now in hospital at Manchester, and his friends are pleased to learn that he is making good progress towards recovery. He hopes to be out of bed by mid-August.

Both these lads are sons of Mr A. Macrae, shepherd, Easter Rarichie, Nigg."

Learning that Duncan was in hospital in Malta, I recalled that the museum had a photo of a soldier lying in bed in Malta, which much to my delight turned out to be of Duncan.

The only thing left was to search the newspapers to see if I could find out what became of the Macrae family. Doing this, I thought I had stumbled on an unconnected story of, “Land Raids at Nigg”. Land raids occurred in the years following WWI when soldiers, disillusioned with politicians’ empty promises, took the law into their own hands and moved onto land they felt was owed to them as recompense for their years of service to their country.

I could not ignore this story as I had never heard of Land Raids in Easter Ross before and it seemed so relevant to our research on the impact of the war at home.

The first sign of trouble is reported in the Scotsman newspaper after the ex-servicemen held a public meeting at Nigg hall on the 10th of May 1922.

During the war, there was a large military camp on Pitcalnie Farm, Nigg, Ross-shire, after the huts were removed quite a large number of ex-servicemen, accustomed to farm work, applied to have the land divided into smallholdings. The Board of Agriculture prepared a scheme, which was approved by the Treasury and the men were expecting entry at Whitsunday. When it was reported that the scheme had been turned down by the Scottish Secretary the men held a meeting and expressed their bitter disappointment. They instructed their secretary to wire to the Prime Minister asking for an immediate inquiry to be made, and to Mr Ian Macpherson, MP for the constituency, they wired that serious trouble could only be averted by instant action.
A resolution was passed referring to dilatoriness on the part of the Board of Agriculture and the Scottish Secretary in settling ex-servicemen on the land. They further agreed to send the following resolution to the Prime Minister, Mr Ian Macpherson, Sir Donald Maclean, and Mr Clynes;-“That this meeting of ex-servicemen emphatically protest against the proposed expenditure of the nation’s money for transporting ex-servicemen overseas, and insists that a serious attempt be now made to implement the promise of restoring their land to its defenders.”

After World War I the Board of Agriculture had been given powers to break up farms into smallholdings for ex-servicemen and their families. Over 20 successful Small Holdings were created, at this time, in Arabella where several of the old corrugated iron huts from the Nigg camp can still be seen. But for some reason the planned holdings at Pitcalnie, although being approved by the Board of Agriculture, had been halted by the Scottish Secretary, Robert Munro and as no satisfactory reply had been received to the men’s resolution, on the 16th they were to show that this was no idle threat.

The Scotsman, 17th May 1922.
Ross-shire Land Trouble.
Ex-servicemen Peg-out Holdings for Themselves

Ex-Servicemen at Nigg, Ross-shire, met yesterday when it was reported that there was no reply of any kind to the telegram and resolutions of last Thursday from the Secretary for Scotland, the Board of Agriculture, or Mr Macpherson, MP. Six of the men who were promised holdings proceeded to Pitcalnie Farm, to which it is stated they were to get entry this Whitsunday, and pegged out the holdings for themselves pending cultivation. There was a reply from Sir Donald Maclean saying he was asking a question in the House of Commons on the subject, and also one from Mr Clynes.

The story soon became national news and a list of most of the ex-soldiers involved was published in the Aberdeen Journal; Gillies Macbean, Culnaha, Duncan & Alexander Macrae( Pictured), Easter Rarichie and William & Alexander Macleod, Balnabruich. Duncan and Alexander although seriously wounded in the war still had some fight left in them, the men pegged out their holdings, threatened to drive the livestock from the farm and made it clear they were willing to go to jail if it came to it.

The Board of Agriculture quickly sent representatives to plead with the men not to do anything rash and a tense meeting followed where the ex-servicemen were promised they would get the holdings in November. Then the newspapers fall silent on the incident, perhaps not wanting to highlight their success and the next time we find the Macrae brothers in the news it is 1936 where the headline is “Triumph of the smallholder: Messrs D. and A. Macrae, Pitcalnie, who have a smallholding at Nigg, won a group prize at the Dingwall Show", triumph it certainly was.