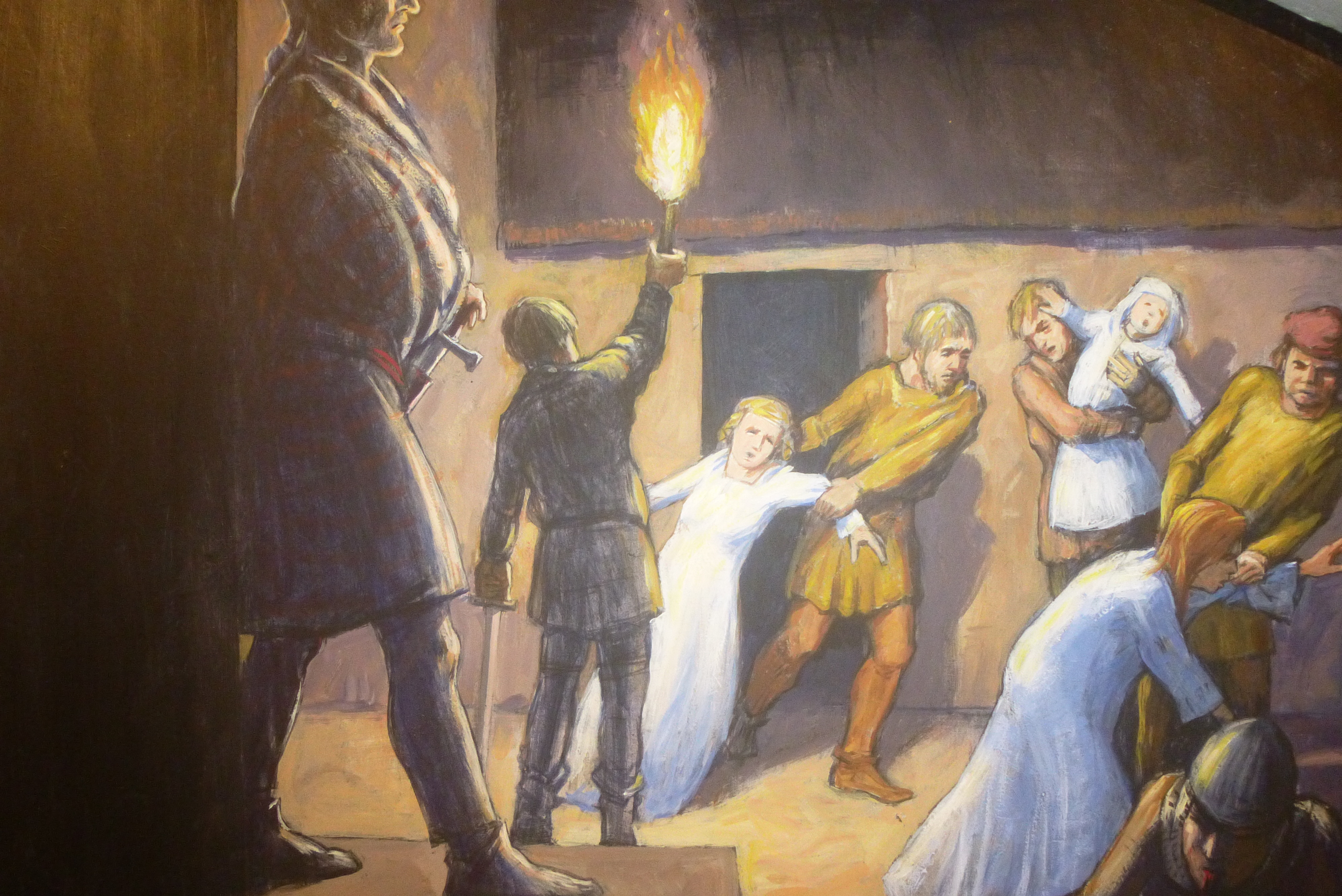 The capture of King Robert the First's Ladies at Tain.

This November Netflix will screen the movie “Outlaw King” a historical action drama film about King Robert the Bruce. The film will tell the story of King Robert’s initial unsuccessful efforts to free his country from the English, under Edward I, to his total victory at the Battle of Bannockburn in 1314.  We hope that the notorious part that Tain and the Earls of Ross played in the story gets a mention but in case it doesn’t, we thought it an ideal time to tell the tale.

Bruce was crowned King of Scots at Scone, on 25th March 1306, but by June things were not going well. Defeat at the battle of Methven had put Bruce and his supporters on the run. His wife Queen Elizabeth De Burgh and her retinue were captured by the Earl of Ross in the “Girth of Tain”. The earliest account of the incident can be found in the epic poem “The Bruce” written by John Barbour sometime in the 1370s.

“The Queen and also Dame Marjory, his daughter, afterwards happily wedded with Walter, Steward of Scotland, would in no wise lie longer in Kildrummy Castle to abide a siege, but rode rapidly, with knights and squires, through Ross to the Girth of Tain. But they made the journey in vain, for the people of Ross, not desiring to bear the blame and danger of harbouring them, took them out of the Girth, and sent them everyone to England, to King Edward. He caused all the men to be drawn and hanged, and put the ladies in prison, some in castles and some in dungeons.”

Mary Bruce and Christina Bruce (Robert’s sisters), Marjorie Bruce (his daughter), Elizabeth de Burgh (Robert’s second wife) and Isabella MacDuff (who crowned Robert at Scone) were all captured and betrayed to the English by William, Earl of Ross. It is believed that they had taken sanctuary in the Chapel of St. Duthac at Tain while on their way to the safety in Orkney. William violated the sanctuary and they were taken prisoner and handed over to King Edward of England. Mary Bruce was held prisoner in a cage exposed to the public at Roxburgh Castle. She would spend the next four years in the cage. A similar fate was suffered by Isabella MacDuff who had crowned Robert at Scone. Edward I had sent the following instructions for her: "Let her be closely confined in an abode of stone and iron made in the shape of a cross, and let her be hung up out of doors in the open air at Berwick, that both in life and after her death, she may be a spectacle and eternal reproach to travellers."

Marjory Bruce, Robert’s daughter, was only 12 years old when she was captured at Tain. At first King Edward decided that she would be locked into an iron cage and hung for all to see from the walls of the Tower of London but he later relented and Marjory was held in a nunnery in Yorkshire.  Elizabeth de Burgh, Bruce’s wife, was held prisoner in England. It is thought that she was better treated because her father Richard de Burgh, Earl of Ulster, was a close friend and ally of King Edward I.

It was only after Robert’s total victory at the Battle of Bannockburn, in 1314, that he was able to negotiate their release.  After 8 long years of imprisonment, all the women were returned to Scotland, apart from Countess Isabella who “was lost to history” presumably she died of her ordeal sometime before 1314.

The Earl of Ross, William, no supporter of Edward I was, in fact, a supporter of John Balliol. William was one of the leaders of the Scottish army at the Battle of Dunbar in 1296 when Edward invaded Scotland to punish Balliol for refusing to support the English invasion of France. After the Scottish defeat, William was captured by the English and sent to the Tower of London where he remained until September 1303, when an order was issued for his escort to Scotland.

It is also worth pointing out that records show that William’s son, Walter, is recorded as being at Cambridge in 1306. Was Walter a hostage?  Is this the reason for William’s actions? To add to the uncertainty Sir Walter Ross is one of only two knights recorded to have died fighting for Bruce at Bannockburn. Sir Edward Bruce, Robert’s brother is quoted as,”wishing the day was undone so Walter would still live”. When Walter returned to Scotland is not clear but long enough to befriend Edward Bruce.

As Bruce gained support in Scotland William’s position became more difficult, he sent a request for help to Edward II, but none came so he submitted to Bruce at Auldearn, in October. He was given easy terms, getting all his lands back with the additions of Ferincoskry (Creich) and the burgh of Dingwall and its castle.

The Earl of Ross was now firmly on the Bruce side and would go on to lead his men at the decisive battle at Bannockburn in 1314, he was also one of the eight Earls who signed the Declaration of Arbroath, a letter sent to Pope John XXII, dated 6 April 1320, intended to confirm Scotland's status as an independent, sovereign state and, most controversially, that the independence of Scotland was the prerogative of the Scottish people, rather than the King of Scots.