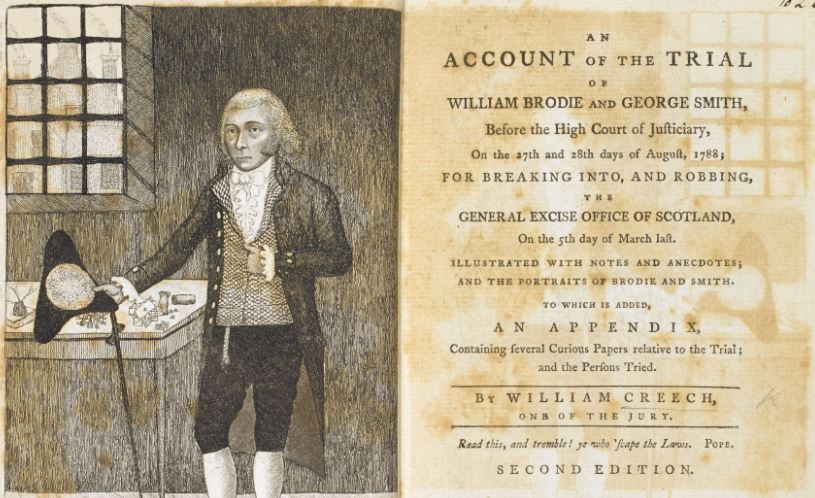 An article packed with 18th-century history, written by Rosemary Mackenzie, from a talk she gave to the Inverness Highland Family Society in January 1989.

In the absence of her husband and when she became a widow, Naomi Ross was the factor and supervisor of the farms and properties of Arbol, Amat, Pitcalnie and Corriemulzie. The family had always been fortunate in the men they employed as Grieves or Doers - Abner Gallie at Meikle Tarrel and John Crombie at Amat. The reports and letters from them showed their loyalty to their young chief and his mother. Her income had to stretch a long way. She sent attainted Callum Oag the rents of the Estate of Arboll – we found money orders on Coutts Banks payable at Dunkirk.

For the next twenty-five years, she journeyed to Edinburgh where she stayed for the winter. Her flat was on the second floor of a tenement on the High Street above a firm of Furniture Makers, Francis & William Brodie who were her landlords. William Brodie was the infamous Deacon Brodie - he was the prototype of Robert Louis Stevenson’s Dr Jeykell and Mr Hyde. Naomi speaks of him as a willing tradesman and helpful landlord – he even dandled Munro on his knee. She apparently had no idea of his nocturnal roistering. The Old Edinburgh Club was extremely interested in the accounts of Deacon Brodie and the furniture he made for her.

Leaving Edinburgh by the West Bow in a chaise, paying a toll of 4d and another at Cramond Bridge. She then stayed the night and crossed Queensferry which cost 3/6d. Another toll was due at Inverkeithing and Kelly Bridge where the driver gets 6d of Porter before proceeding to Kinross for the night, from there to Bridge of Earn, with a toll of 9d, to stay the night in Perth. The ferry there cost 1/6d and a night at the Half-way House, 4/6d. The next night was spent at Blair and Dalnacardoch to Dalwhinnie, an escort of soldiers was required which cost 1/-. The next night was Aviemore with a stop at Castle Grant. Guides were required for the next few miles to the Brig at Dulay and Mr White’s house to spend the night, from there to Nairn with 7/- to the boatman to take her over to Ross-shire, Cromarty and home.

The hazards of the journey were not only cold carriages without springs and hard wheels bumping over appalling tracks. In a letter to her friend Lady Mackenzie of Ardoch, Naomi describes when one of the horses went lame, the farrier at Aviemore bled the poor animal and they made out to Dalwhinnie. She observed the horse was uneasy and the driver said he had rubbed the leg with spirits and vinegar and a little of it had got into the wound. Coming down the hill at Dalnacardoch, the leg gave way and the carriage overturned, the other passenger and her maid landing on top of Naomi.

The education of Munro Ross, the young chief, was of great importance and his mother certainly saw that he went to the best schools and had the best tutors. Perhaps there were too many schools and too much close supervision. At any rate, he rebelled more than once. In 1762, he was at Edinburgh High School and attended the Law Court with his mother - he was 9 years old. In 1765, he was a boarder at the new school at Fortrose where the headmaster wrote his mother – “This week he had on his coat and philabeg but must get the addition of a pair or two of tartan hose for the sake of uniformity”. It seems he ran away from Mr Smith and at the age of 15, he attends St. Andrew’s University. For one term, Naomi stayed in St. Andrews and this is how Munro’s studies were arranged; “His private master comes in at 8 in the morning and stays until 9 – at 10, he goes to the Logic Class and at 5, he comes home and brings a student with him who, after Tea, teaches him Fiddle till after 6 when his Private Master comes, who being the most excellent person, I keep for the most part of supper."

In 1772, Munro went to Edinburgh where his tutor was the famous blind poet and Philosopher, Dr Blacklock. His mother was not with him but he did not escape supervision. Mrs Grant, Naomi’s housekeeper, there wrote to her that she was worried because Munro was not attending classes and furthermore, he had purchased a suit of scarlet lined with white silk and gold buttons. He was summoned home where he was enrolled as a Freeman of the County and admitted as an Advocate. In 1776, he went to London to plead his ‘cause’ before the House of Lords. His mother made a careful note of the clothes he took with him – 21 shirts, 13 ruffled, 6 plain and 2 nightshirts, 8 pairs of silk stockings, 13 stocks, cambric and muslin, 5 pocket napkins, cambric and 5 coloured, 2 cotton nightcaps and 2 nets, 4 pairs of drawers, flannel and linen, 2 pairs laced ruffles; A grey coat vest and breeches, black coat with black silk vest & breeches; striped saloon vest & breeches; 3 Tambour vests; A green coat and salt % pepper coat with cloth lambou for £580 and cash in his pocket £19 – 18/6-

Munro died, unmarried, at Amat in 1820. The family documents came from Amat to Miss Rosa’s family from George Ross of Pitcalnie.”