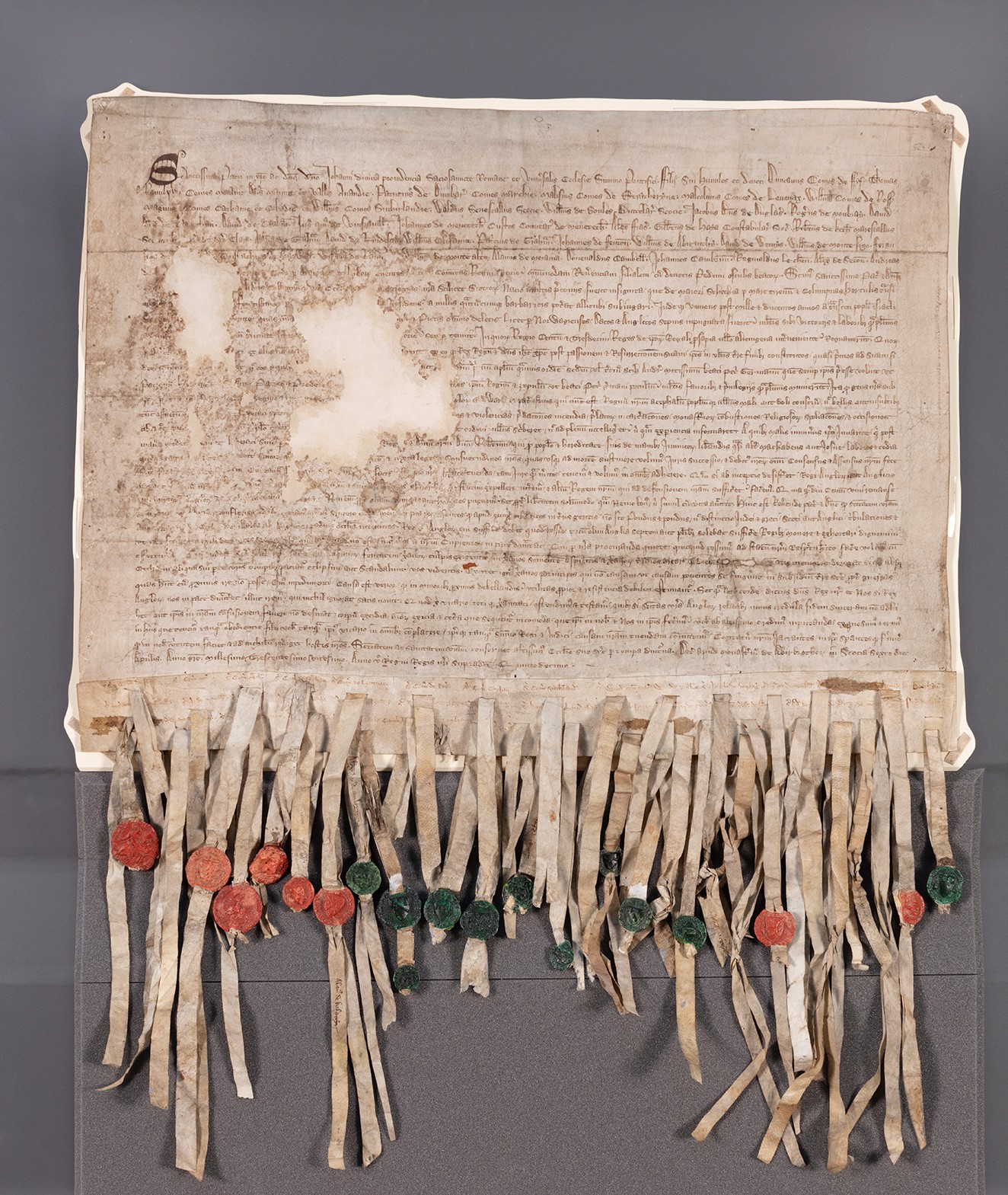 A translation of the Declaration of Arbroath and its connection to Clan Ross.

The Declaration of Arbroath, dated 6 April 1320, and addressed to Pope John XXII, is without doubt one of Scotland's most important documents. Signed by eight Earls and thirty-one Barons including Earl William Ross it was intended to assert Scotland's status as an independent, sovereign state after years of war. Over four hundred years later, a descendent of William's, George Ross, would sign the Ameican Declaration of Independence in Philadelphia, Pennsylvania, on July 4, 1776.

Most Holy Father, we know and from the chronicles and books of the ancients, we find that among other famous nations our own, the Scots, has been graced with widespread renown. It journeyed from Greater Scythia by way of the Tyrrhenian Sea and the Pillars of Hercules, and dwelt for a long course of time in Spain among the most savage peoples, but nowhere could it be subdued by any people, however barbarous. Thence it came, twelve hundred years after the people of Israel crossed the Red Sea, to its home in the west where it still lives today. The Britons it first drove out, the Picts it utterly destroyed, and, even though very often assailed by the Norwegians, the Danes and the English, it took possession of that home with many victories and untold efforts; and, as the histories of old-time bear witness, they have held it free of all servitude ever since. In their kingdom, there have reigned one hundred and thirteen kings of their own royal stock, the line unbroken by a single foreigner.

The high qualities and merits of these people were they not otherwise manifest, shine forth clearly enough from this: that the King of kings and Lord of lords, our Lord Jesus Christ, after His Passion and Resurrection, called them, even though settled in the uttermost parts of the earth, almost the first to His most holy faith. Nor did He wish them to be confirmed in that faith by merely anyone but by the first of His Apostles -  by calling, though second or third in rank - the most gentle Saint Andrew, the Blessed Peter’s brother, and desired him to keep them under his protection as their patron forever.

The Most Holy Fathers your predecessors gave careful heed to these things and strengthened this same kingdom and people with many favours and numerous privileges, as being the special charge of the Blessed Peter’s brother. Thus our people under their protection did indeed live in freedom and peace up to the time when that mighty prince the King of the English, Edward, the father of the one who reigns today, when our kingdom had no head and our people harboured no malice or treachery and were then unused to wars or invasions, came in a guise of a friend and ally to harass them as an enemy. The deeds of cruelty, massacre, violence, pillage, arson, imprisoning prelates, burning down monasteries, robbing and killing monks and nuns and yet other outrages without number which he committed against our people, sparing neither age nor sex, religion nor rank, no-one could describe nor fully imagine
unless he had seen them with his own eyes.

But from these countless evils, we have been set free, by the help of Him who though He afflicts yet heals and restores, by our most tireless prince, King and lord, the lord Robert. He, that his people and his heritage might be delivered out of the hands of our enemies, bore cheerfully toil and fatigue, hunger and peril, like another Maccabaeus or Joshua. Him, too, divine providence, the succession to his right according to our laws and customs which we shall maintain to the death, and the due consent and assent of us all have made our prince and king. To him, as to the man by whom salvation has been wrought unto our people, we are bound both by his right and by his merits that our freedom may be still maintained, and by him, come what may, we mean to stand.

Yet if he should give up what he has begun, seeking to make us or our kingdom subject to the King of England or the English, we should exert ourselves at once to drive him out as our enemy and a subverter of his own right and ours, and make some other man who was well able to defend us our King; for, as long as a hundred of us remain alive, never will we on any conditions be subjected to the lordship of the English. It is in truth not for glory, nor riches, nor honours that we are fighting, but for freedom alone, which no honest man gives up but with life itself.

Therefore it is, Reverend Father and Lord, that we beseech your Holiness with our most earnest prayers and suppliant hearts, inasmuch as you will in your sincerity and goodness consider all this, that, since with Him Whose vice-gerent on earth you are there is neither weighing nor distinction of Jew and Greek, Scotsman or Englishman, you will look with the eyes of a father on the troubles and privations brought by the English upon us and upon the Church of God. May it please you to admonish and exhort the King of the English, who ought to be satisfied with what belongs to him since England used once to be enough for seven kings or more, to leave us Scots in peace, who live in this poor little Scotland, beyond which there is no dwelling-place at all, and covet nothing but our own. We are sincerely willing to do anything for him, having regard to our condition, that we can, to win peace for ourselves.

This truly concerns you, Holy Father, since you see the savagery of the heathen raging against the Christians, as the sins of Christians have indeed deserved, and the frontiers of Christendom being pressed inward every day; and how much it will tarnish your Holiness’s memory if (which God forbid) the Church suffers eclipse or scandal in any branch of it during your time, you must perceive. Then rouse the Christian princes who for false reasons pretend that they cannot go to the help of the Holy Land because of wars they have on hand with their neighbours. The real reason that prevents them is that in making war on their smaller neighbours they find a readier advantage and weaker resistance. But how cheerfully our Lord the King and we too would go there if the King of the English would leave us in peace, He from Whom nothing is hidden well knows; and we profess and declare it to you as the Vicar of Christ and to all Christendom.

But if your Holiness puts too much faith in the tales the English tell and will not give sincere belief to all this, nor refrain from favouring them to our undoing, then the slaughter of bodies, the perdition of souls, and all the other misfortunes that will follow, inflicted by them on us and by us on them, will, we believe, be surely laid by the Most High to your charge.

To conclude, we are and shall ever be, as far as duty calls us, ready to do your will in all things, as obedient sons to you as His Vicar, and to Him as the Supreme King and Judge, we commit the maintenance of our cause, casting our cares upon Him and firmly trusting that He will inspire us with courage and bring our enemies to nothing. May the Most High preserve you to His Holy Church in holiness and health for many days to come.

Given at the monastery of Arbroath in Scotland on the sixth day of the month of April in the year of grace thirteen hundred and twenty and the fifteenth year of the reign of our King aforesaid."