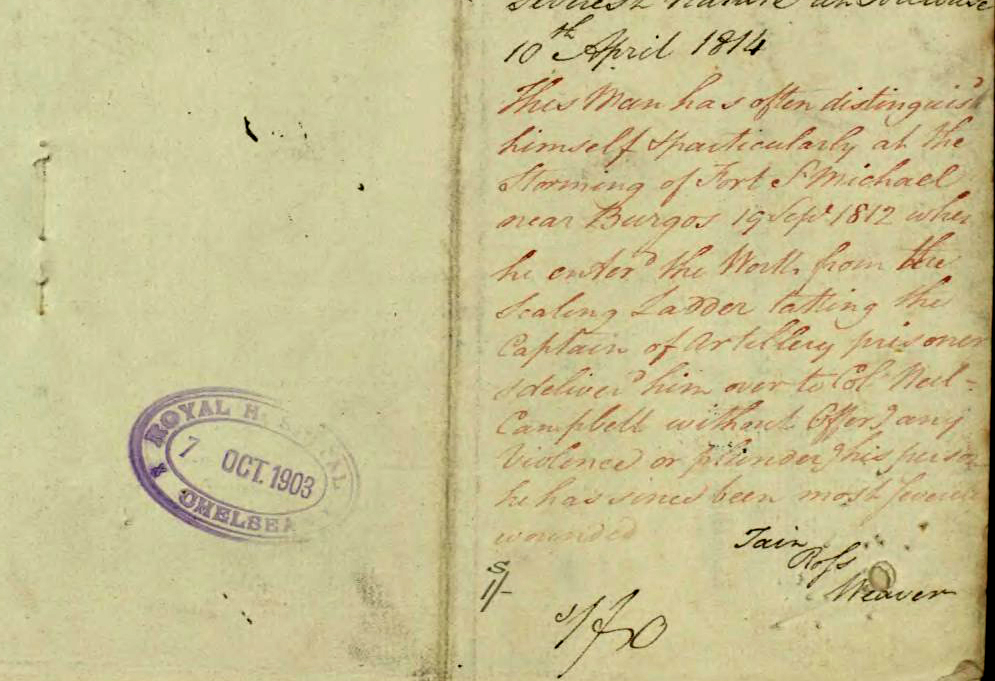 In the late 18th and early 19th century, thousands of men from Easter-Ross enlisted into Highland Regiments serving in the British Army. Soldiers from Easter-Ross played a part in many famous sieges and battles and would see action at almost every corner of the globe. The pension records of these men sometimes give us a fascinating insight into the military service of the ordinary soldier.

The pension papers of William Johnston contain the usual record of his service in the army but also details of his exploits during the infamous siege of Burgos in 1812. William was born in Tain and is described as being five foot, nine inches in height, with black hair, hazel eyes and a swarthy complexion and was to trade a weaver. He enlisted in the 42nd Foot or Black Watch in 1802 after almost four years’ service in the Ross & Cromarty Militia, being discharged because of wounds received at the Battle of Toulouse after serving twelve years with the regiment.
Handwritten at the bottom of the paper is the following;

“I do certify that Private William Johnston above mentioned has for a period of twelve years which he has served in the 42nd Reg.t shown himself as a brave & meritorious soldier ~ and that he has in the field of battle more than once distinguished himself, particularly at the storming of the Fort of St Michael near Burgos on the night of the 19th of Sept. 1812 when he was one of the foremost men who entered the enemy’s work with a scaling ladder, taking the captain who commanded their artillery prisoner & delivering him over to Col. Will Campbell without offering him violence or plundering his person. He was again twice severely wounded at the battle of Toulouse, which has rendered him totally incapable of earning a livelihood. I do therefore earnestly recommend this gallant soldier who has so faithfully his King and Country.”
Robert Anstruther Major 42nd Foot.

An obituary in the Inverness Courier on May the 8th 1856 tells of William’s death in New Zealand and adds some details to his life after leaving the army.

“Died at his residence, Cumberland Hill, Lot 53, on Saturday the 16th February, William Johnston, late Sergeant 42d Royal Highlanders aged seventy-six years. Johnston was born at Tain, Ross-shire, in the north of Scotland; he enlisted in the army in the year 1793, the 42d at the time being stationed at Montrose, from which they embarked for Hull. Johnston was in all the battles and skirmishes that the regiment was engaged in from 1793 till the battle of Toulouse, where he fell by a severe wound, in consequence of which he got his discharge. Johnston was wounded at Corunna, Salamanca, at the Storming of Fort St Michael, Burgos while on the ‘forlorn hope’, besides through the body at Toulouse. He was discharged in 1814 when he got married and with his pension, acted as a gamekeeper and forester at Cromarty, and in the parish of Nigg, Ross-shire, Scotland, till the year 1837, when on the accession of the Whigs to power, he mortgaged his pension and emigrated to this country. Deeming the terms hard, however, as he well might, he first wrote a letter to his old commander, the Duke of Wellington, in which, in the hope that their stringency might be relaxed in his behalf, he stated both his service and his case, and promptly did the Duke reply, in an essential kind autographed epistle, in which, after stating that he had no influence at this time with the Ministers of the Crown, and no means of getting a relaxation of those terms in behalf of anyone, he earnestly recommended William Johnston not to seek a provision for himself and his family in the colonies, unless he were able-bodied and fit to provide for himself in circumstances of extreme hardship; and, second, on no account to sell off mortgage his pension. But the advice was not taken. Johnston did emigrate to the colonies, and did mortgage his pension, and suffered considerably in consequence, till his family, consisting of four sons and two daughters, grew strong to help him on in the hardships of new settlers in Prince Edward Island. Johnston had been for the last 19 years settled down as a farmer at Cumberland Hill, Grand River. He only survived his wife thirteen months, and was followed, on Tuesday the 19th Inst, by a large and respectable concourse of people to his grave”

William was awarded a Military General Service Medal with clasp for the Battles of Corunna, Salamanca, Pyrenees, Nivelle, Orthez and Toulouse.