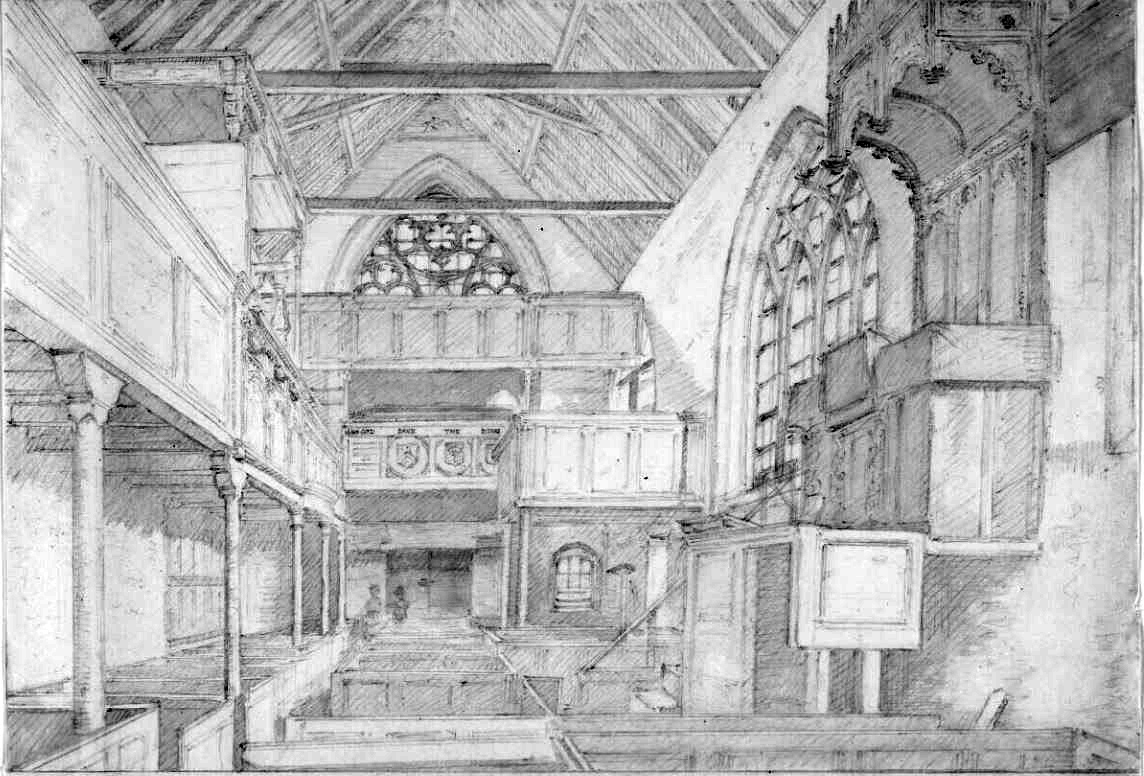 A view and description of the closed and unused St Duthac's Collegiate Church as it was in the early 19th century.

The Collegiate Church in Tain was used from at least the early 1400s until 1815 when the doors were shut for the first time. The church was very different to the empty memorial church of today, as can be seen in this sketch, from 1819, by Tain schoolmaster William Shand. During Miss Catherine Sinclair's visit to Tain in 1838, she writes, rather entertainingly, about visiting the church just a few years before it was renovated;

"It reminded us of old times, to see the Gothic church there, which was forsaken for a barn-like edifice of larger dimensions. The state of this venerable building at present is perfectly unique. The roof is entire, but a scene of desolation reigns within, quite beyond description—and you would imagine that some drunken brawl, or O. P. riot, had taken place there before it was deserted.

Pews are torn up by the roots and scattered in fragments on the aisles, galleries hanging in splinters, the curtains in tatters, the windows broken and partly built up, the tombs defaced, the pulpit-stair a mere wreck, and the sacred desk itself tottering towards the ground. You might fancy that a destructive army of soldiers had laid it waste not an hour ago, but this has been its situation these many years, for the whole place is encrusted with dust and festooned with cobwebs.

We were quite scandalized to see this venerable church in so disreputable a condition. There are traces yet remaining, however, of departed magnificence. The principal pew, with pillars on each side and canopy above, is of carved oak, gilded like the frame of a mirror. The galleries have once been painted in brilliant colours, representing badges of all the different trades at Tain, wheat-sheaves for the bakers, and scissors for the tailors, which were necessary hieroglyphics in old times for those who could neither read nor write.

The only objects we saw not in this pitiable state of decay, were a large black velvet pall, which lay in a heap at one corner of the church, and two modern white marble tombs, the first commemorating the old clergyman who last preached from this forsaken pulpit, and the other in memory of Mrs. Ross Rose, who at the early age of twenty-seven suddenly dropped down dead when preparing medicines for a sick and indigent family. A marble figure is sculptured on one side of the tablet, in an attitude of meditation, and a kneeling child opposite, while underneath we observed an inscription, expressing all that grief could dictate, to attract the sympathy and respect of strangers.

On the external wall of this church are some curious old coats-of-arms and images, nearly obliterated with age; but one of the effigies had lately a most amusing adventure, as a worthy magistrate at Tain thought it a good plan for immortalizing his own physiognomy, to have this old saint metamorphosed into a likeness of himself, and accordingly Bailie Ross called in a sculptor and caused his own magisterial features to be duly copied for the occasion. Unfortunately, after the transformation was accomplished, and the city of Tain had been entertained for years with admiring this modern antique, it one day fell prostrate, breaking through the arch of a burial vault, and when we looked down, amidst crumbling coffins and human bones there lay the broken image of the aspiring Bailie Ross, whom I shall certainly make a point of never forgetting.

The good people of Tain behave rather unhandsomely to the dead, having no scruple apparently in elbowing them out of their own tombstones. I found here an ancient tablet, where, instead of refreshing the original name and date, as Old Mortality did, one half of the inscription has been allowed to remain, setting forth the virtues of an individual deceased a hundred years since, but his own designation was erased, and the stone chiselled an inch deep with the name of Mrs Janet Monro, wife of Alexander Monro of Tain, who died in 1839. The good lady may have been tolerably honest during her life, but this is the only instance I know of a posthumous theft. It might positively be actionable if either plaintiff or defendant could be summoned into court."

William Shand sketch from the National Libraries of Scotland.