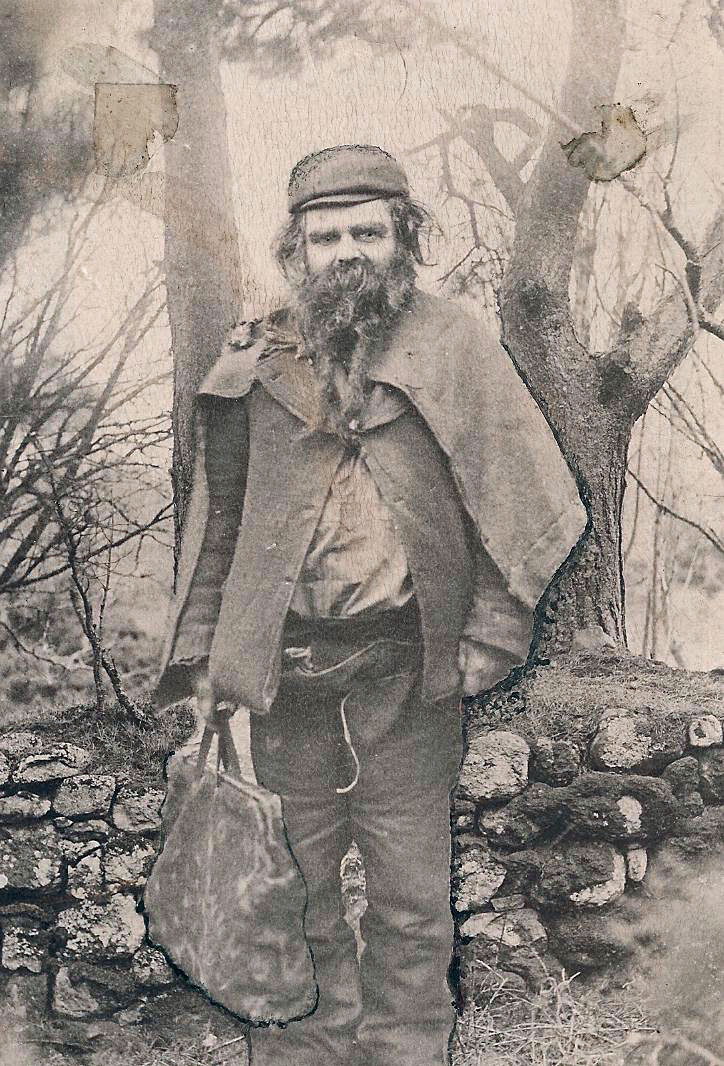 A short tale of Davie Gogie who lived in Calrossie Woods.

The following account is based on several newspaper cuttings, all unfortunately undated, but this postcard was sent in 1906 so the period concerned is the latter part of the 19th century and the very early part of the 20th. David Ross, otherwise known as “Davie Gogie”, lived in Calrossie woods for about 20 years.  He belonged to Kiltearn Parish but 35 years or so before the photograph was taken his family – his parents, brother and Davie – moved to Fearn where Davie worked as a ploughman.  After the death of his parents, he and his brother kept house together at Fearn but when his brother died, Davie left the house and became a vagrant & eccentric.  (The information in the museum accompanying this photograph said it was after he had witnessed a murder but the newspapers make no mention of this.)  He lived in Calrossie woods in rough huts made from branches and whatever material he could lay his hands on to give him shelter from heavy rain and the winter cold.  He apparently spent his time poaching and taking long walks in the woods.  In this regard, he seems to have enjoyed the blessing of the local landowner, a Mr Hall Macdonald, who allowed him to roam at will.

His eccentric lifestyle caught the public imagination and he received many visitors from Tain and all parts of the country who came to view what he called his “ideal home”.  One account suggests he was shy or even had a dislike of strangers, disappearing into the woods when he saw anyone coming and putting his hands in front of his face if someone approached with a “little black box.” Despite this, the museum possesses three different images in which he seems to be posing quite happily for the camera.  Two at least of these were made into postcards including the one seen here.

When he tired of one place he moved to some other part of the woods.  At one point he camped near Mounteagle and later near Bogbain.  It was while living at the latter site in a gravel pit about 12 feet deep, that authority eventually caught up with Davie.    After being taken into Tain on a breach of the peace charge, he was “induced to accept the friendly shelter of the Easter Ross Union Poorhouse” as a local newspaper report termed it.  The Magistrate dealing with the case said he would admonish him if he agreed to go to what locally was known as “Arthurville”.  Poor Davie no doubt felt he had no choice and although he allowed himself to be taken into care, he made it clear he would have wished to stay where he was and didn’t think he would last long.  And so it proved.  Although at first, he appeared to be quite happy, if somewhat quiet, after only a short period of incarceration, he left the poorhouse and returned to Calrossie, saying he had to get back to the woods or he would soon die.

A report, written about 3 years after he returned to his old way of life, remarked that although he was by then an old man and had been exposed to the severe cold of many winters in the woods, he had never had any illness and still appeared to be enjoying his life as “a hermit in his hut in the woods away from the haunts of men.”  Another newspaper item tells of Davie’s eventual fate but as this again has no date, I don’t know how much later.  He turned up at a railway surfaceman’s house, near Fearn Station having badly burned his hand.  When he fainted, Dr Ross of Tain and the Inspector of Poor were sent for but to no avail.  Davie died the next morning.

His appearance, with his long black matted hair not having seen a barber for many years, his whiskers and beard twisted into long ropes and his makeshift attire of old sacking and cast-offs, earned him the title “Wild Man of the Woods” but although weak-minded he was harmless.