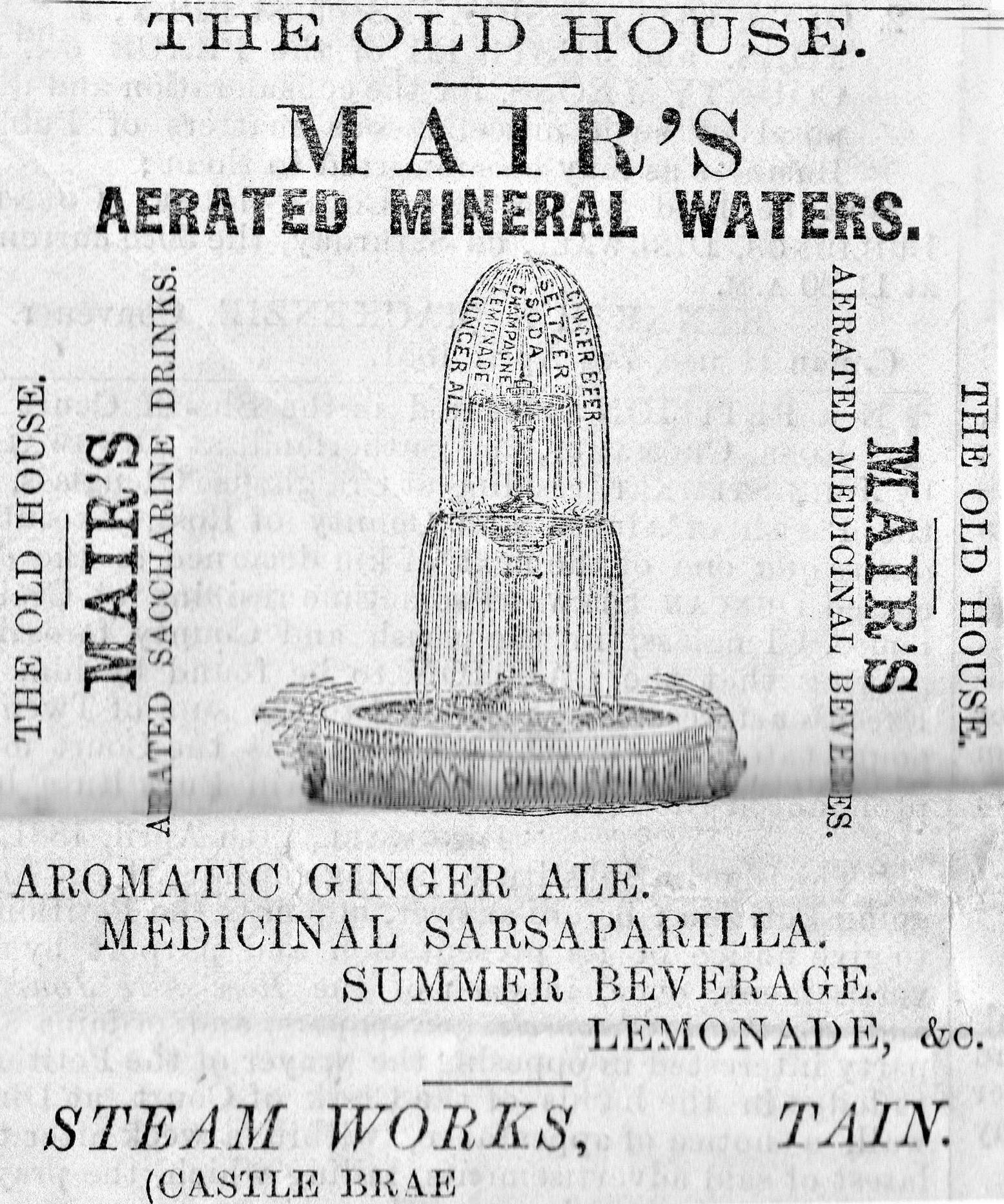 The history of Aerated Water Manufacture in Tain. Part one by Margaret Urquhart

Just as Foundry House is a reminder of one 19th Century Tain industry, so the houses known as “Fountain Cottages” are a reminder of another, as is also the name “Fountain Road”.  These names refer to an old fountain or well which existed on Hartfield Road.  The cottages are located at the site of this well just opposite the back entrance to Tain Royal Academy.  A building is shown on the 1832 map at this location but must have been demolished at some point and eventually replaced by the present cottages which are obviously much more recent – mid 20th Century.   When the “New Town” extension to Tain towards the end of the 18th and the beginning of the 19th Century was first developed its water was supplied from this “Fountain Well” (also known as 'Fuaran Dhaibhith') on Hartfield Road.  Water from this well was also used in the first Aerated Water Works in Tain which was established by David Mair and located on Castle Brae.

Like Donald Ferguson who took over the Tain Foundry, David Mair moved to Tain from Elgin c.1849/50, not as an Aerated Water manufacturer but as a baker & confectioner, occupying the premises at the corner of High Street and Castle Brae which later became Strachan’s and is now Gow’s.   So there have been a baker’s premises of one kind or another on that corner for at least 170 years.  It was not until the mid-1870s that David Mair acquired further property on Castle Brae and established his Aerated Waters works.  In 1878 he advertised as follows – “David Mair, Tain, begs to intimate that he is now in a position to supply all kinds of Aerated Waters, Lemonade, Soda, Seltzer, Potass, Carrara, Ginger Beer, Ale, &c., &c., of the finest Quality.” He added that he had “erected machinery of the newest and most improved pattern, and has secured the services of an experienced chemist.  As materials of an unexceptional purity are employed, and as water of the well-known ‘Fuaran Dhaibbidh’ is well adapted for the purpose, he can confidently recommend his manufacture as admirably fitted both for medicinal and ordinary use.”

His mineral water bottles were usually Hamilton’s (oval-shaped bottles introduced in 1814 by a Wm Hamilton) and usually bore a Fountain Logo (as seen in the 1881 advert) representing the source of the water used.  The location of the works was referred to in adverts as “The Old House, Steam Works, Castle Brae”.  The exact location of this I am not sure but it may have been the building that later was Strachan’s bake-house and is now part of Brown’s Art Gallery.

To begin with, apprentice bakers were employed, some from as far away as Helmsdale and Forres, but, when they were old enough two of David Mair’s sons, John and William, joined him in the bakery.  When the Aerated Waters works were established, William concentrated on that side of the business and John continued on the bakery side.  David Mair died in 1885, having been a Councillor for many years and Dean of Guild at the time of his death.  In 1888 the following notice stated “To be sold by Public Roup, within the Royal Hotel, on Saturday, 14th day of January 1888, at Twelve o’clock noon.  All and whole that Tenement of Shops and Dwelling Houses, with the Pertinents belonging thereto, lying upon the north side of the High Street of Tain, and which belonged to the late David Mair, baker, and is now possessed by his Representatives and other tenants.”

Nonetheless, at the time of the 1891 census, John and William were still in Tain, John still registered as a baker and William as aerated water manufacturer.  John Mair, “Confectioner, Bread and Biscuit Baker, 6 High Street, Tain” features in an advert in the Tain Free Lance in 1892.  However, John R Strachan, baker, took over the Mair premises in 1898 and the aerated waterworks had ceased production before then.  William Mair had moved to Inverness, by 1894, probably even earlier, as his daughter, Jemima was born in that year in Inverness.   The 1901 census shows him still in Inverness, working as a “bottler, aerated water” presumably for an Inverness aerated water firm.   John seems to have left Tain also as he does show in the 1901 census records for Tain.  Where he went is not known.

However, this was not the end of the manufacture of aerated waters in Tain.  In 1894 Andrew Maitland Jnr, Managing Director, and James Stephen, the secretary, of the distillery company, revived the defunct lemonade business in Tain as the “Highland Aerated Water Company” and built “commodious premises” in Academy Street.  When work was slack at the distillery the men worked in the aerated waterworks.  Then in 1908 the business was put up for sale, by which time both Andrew Maitland Jnr (1898) and James Stephen (1907) had both died.  The premises were acquired by Alastair Macdonald who later established a laundry and operated both under the name A Macdonald & Coy.

The next chapter in the story will be dealt with in a following article.