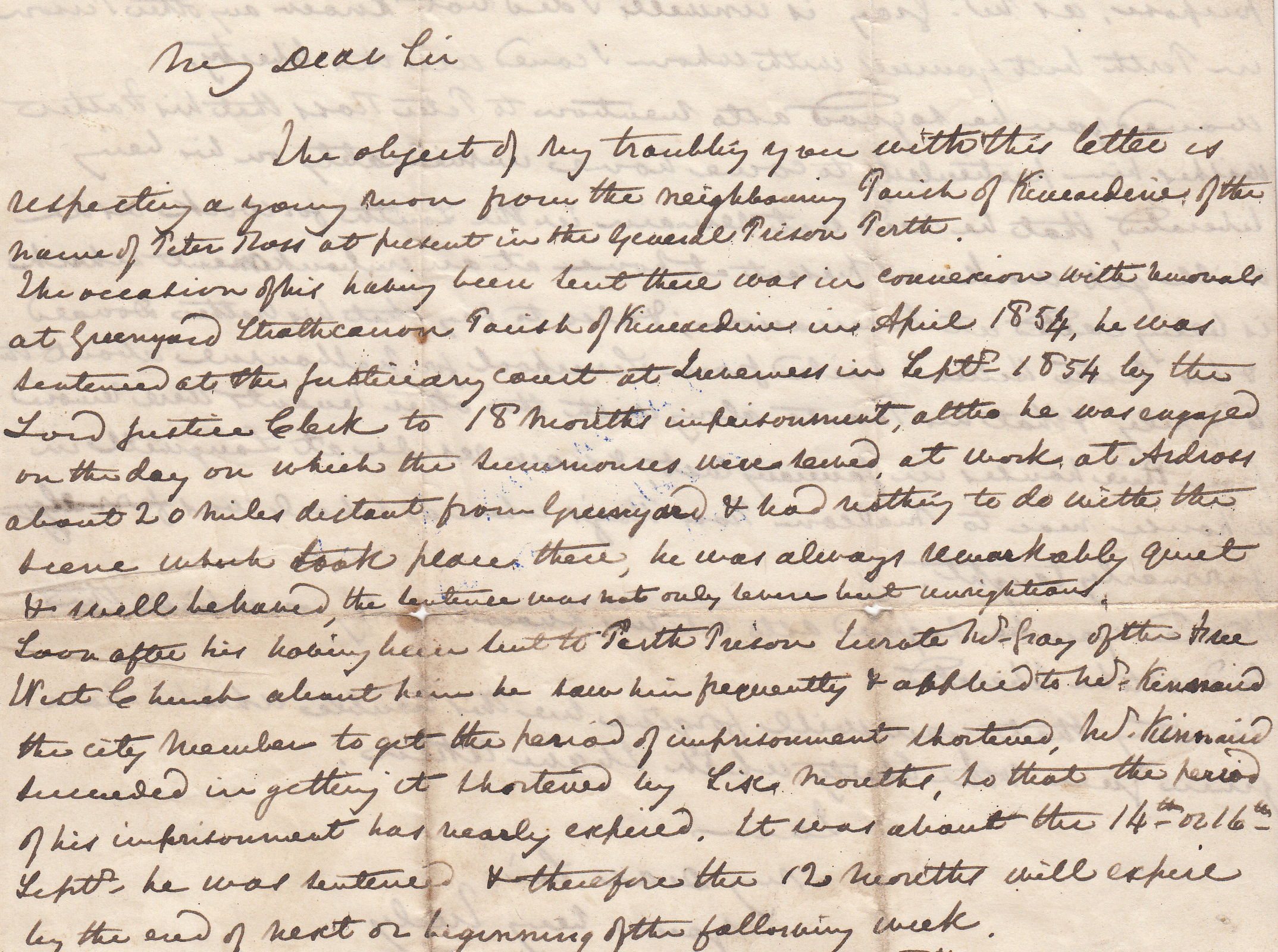 A letter from Gustavus Aird, the minister at Kincardine, regarding Peter Ross and the 'Massacre of the Rosses'.

In the months following the ‘Massacre of Rosses in Greenyard’ in April of 1854, the authorities ignored the vicious assault on the women of Kincardine by the police, and the only charges that were brought were against two of the protestors. Ann and Peter Ross were both charged with mobbing and rioting and were sentenced to 12 months and 18 months of hard labour, respectively.

The following letter (pictured) sent by Gustavus Aird, the minister at Kincardine, to Perth Prison, sheds some light on what happened to Peter and his family following their eviction, and on the ministers’ efforts to get Peter’s unjust sentence reduced. Whilst some of the family managed to find a home across the river at Langwell, it was only 3 acres of land, and two of his siblings Donald and Helen Ross joined the increasing numbers of the evicted who went to Australia.

The object of my troubling you with this letter is respecting a young man from the neighbouring Parish of Kincardine of the name of Peter Ross at present in the General Prison Perth.
The occasion of his having been sent there was in connexion with removals at Greenyard Strathcarron Parish of Kincardine in April 1854, he was sentenced at the justiciary court at Inverness in Septr. 1854 by the Lord Justice Clerk to 18 months imprisonment, altho he was engaged on the day on which the summonses were served, at work at Ardross about 20 miles distant from Greenyard & had nothing to do with the scene which took place there, he was always remarkably quiet & well behaved, the sentence was not only severe but unrighteous.
Soon after his having been sent to Perth Prison I wrote Mr Gray of the Free West Church about him he saw him frequently & applied to Mr Kinnaird the city Member to get the period of imprisonment shortened, Mr Kinnaird succeeded in getting it shortened by six months, so that the period of his imprisonment has nearly expired. It was about the 14th or 16th Septr he was sentenced & therefore the 12 months will expire by the end of next or beginning of the following week.
I had a letter from Mr Gray dated Perth 8th June 1855, in which he stated that “Mr Kinnaird has succeeded in obtaining a reduction of six months on the term of Peter Ross’s imprisonment & that he sent the Secretary of States letter to the Governor of the Prison”.
As I am told, from indisposition Mr Gray is not at present in Perth, I have taken the liberty of troubling you with this letter to ask of you the favour of applying to the Governor of the Prison to know the date at which Peter Ross will be liberated, & to give to P. Ross the enclosed pound note for the purpose of defraying his expenses home; his father John Ross called on me today & wished to get the enclosed pound sent to him for the above purpose, as Mr Gray is unwell I did not know any other Person in Perth but yourself with whom I could use this liberty.
Would you be so good as to mention to Peter Ross that his father wishes him particularly to come home immediately on his being liberated, that he need not remain in the South for work as he will get work at present at home at an embankment which is being erected at Invercarron; & also to say that his brother Donald & his sister Hellen sailed from Liverpool for Melbourne about the 6th of July & that his Parents along with the other Tenants were removed from their houses in January last, & now reside at Langwell in a house near to Malcolm Ross Roy’s where a school was formerly taught.
Would you be so good as to let me know the day on which the lad is to be liberated. Trusting that you will forgive me this trouble, which I have given you & the liberty which I have taken.

I am
My Dear Sir,
Yours very truly
Gustavus Aird

Peter did not follow his brother and sister to Australia but took his father’s advice and returned home to Kincardine where we find him on the censuses still living with his other brother and sister in 1901. It would be good to find out what became of Donald and Helen Ross after they headed off to Australia?