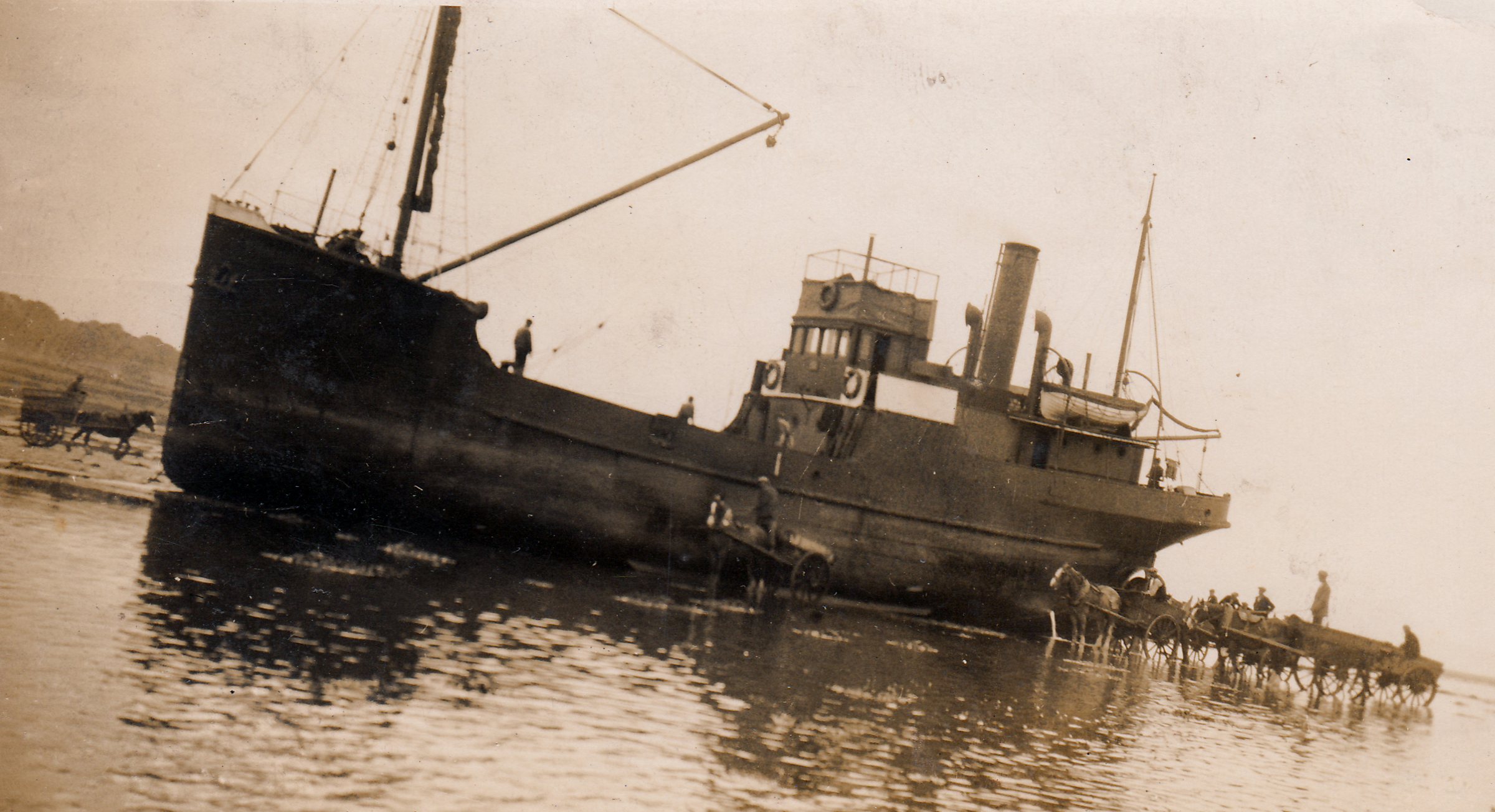 An article on shipping from 'Tain Harbour' during the late 19th and early 20th century, written by the late William Urquhart of Tain(1886-1971).

This is the most I can remember of Tain Harbour – There was a family Ronald Ross, at one time when I was slipping the school, he used to give me a penny to go for his Scotsman. I used to watch for him. He lived in The Cottage where Miss Williamson Ross used to live. His brother Russell Ross built and owned the big store where Fraser Ross is now. He handled all kinds of goods corn, potatoes, etc. and had a coal store. He also had the shop on Tower Street where Chisholm is now. He was a ship owner and traded between Sunderland and Tain. The ship's name was the "St.Duthus" about 200 tons a Schooner rig. The Skipper was Captain Shephard. There was only one of his family, I can mind of - Pat Shephard a School Teacher with a temper of the devil. During the summer months, the ships went to the Baltic Ports with grain. As coal was very little used in summer when the peats were cut in Edderton and in the Moss the little carts came into the Market Place and each load sold at 2/6d a load which would keep a fire going easy a month. So the ship went to trade in the Baltic. I never got to know what happened to the old St.Duthus and the family of Ross are all gone. The anchorage where the ships lay was about one 4 miles of dry land. You could only work unloading about 3 hours a day and the ship's regular time was at high tides. All the crofters in the district carted from the ship as well as the Town carters of which there were many in these days. Coal was delivered to your door at 5/= per load of 10 CWTS. Best English coal.

Now we go on with the next ship, also a Schooner type about 200 tons and the owners were Angus and George Munro. They had the shop which T. Smart now had on Tower St. One part of it was used as a Beer Cellar with beer at 2d. a pint. It used to be a great house of call for the Fish wives from Inver and the Port. The ship which they owned was named the "Elizabeth", registered in Tain. The Skipper's name was Capt. Main, Their Coal Store was on Quarry Lane. They lived at the bottom of the lane where my grandson lives now - I think it is the oldest house in Tain, This family has also died out.

We go on with "The Gem". She was schooner-rigged but built more of the Barge style and used in the wood trade from the Baltic. She would come to Tain Harbour loaded with wood for the Sawmills at Tain. The wood was mostly floated off and the Sawmill had a boat to tow the rafts in. The Ship's owner was Mr Mackenzie. He lived in Flora Cottage. He also owned the sawmill and a Grain Mill driven by steam.

Now I come to a ship which was before my time so I can only give her name which was the "Fantasy". I never could find the owner's name or what she carried, About 1893 Messrs. Mackenzie used Iron Steamships for the wood trade from the Baltic end they came close inshore. â€” They were more like Barges. One was named the "Caledonia". There were small smacks coming once a year with salt to John Gallie's Salt Store in Market St. The Salt Store was where the Butcher is now.

At that time the mussels were in full swing. I have seen over 150 boats in at one time, each for a cargo of mussels. Captain Elder was in charge of the beds. They had three boats and they employed 5 or 6 persons, When the boats came from the east coast for cargoes of mussels they employed over 20 or 30 to tally the baskets. The "tally" was a piece of wood – you put a notch for everyone and a stroke for 5. The price was 2/6 a basket and Captain Elder went round the boats collecting the money. Each Tallyman got 1/- a tide for sitting drinking boiled tea for 3 hours. Tain got a good return from the mussels at that time. A favourite seat of the Buckie men when the tide was in was the Monument dyke, I remember one evening a few of them were in Cameron's Beer Cellar on King Street and wandered down to their favourite seat. One of them wanted to get clear of his cargo of beer and went over the dyke a drop of near 25 feet - he thought it was the same height. It was a good job he was not hurt - I don't know if you heard the Buckie tongue anyway nobody could understand it - and perhaps a good job.

Now we come to the trading of the Sterlina, she was a steamship of about 200 tons. She was discharging a cargo of coat at Bonar Bridge and left on Saturday night for Sunderland - at the mouth of Tain harbour, she went on a sandbank. The Gizzen Brigs were famous for wrecks. One Sunday morning it was blowing a gale and the Lossie Lifeboat could not get near them. They tried to drag a mussel coble from Tain with 8 horses but the horses had to give up. The only man saved was 4 days lashed to the mast when the lifeboat saved him. He lived for years after in Invergordon. His name was Jockan Rice, Tain harbour was all right as at Glasgow and Liverpool they had only anchorages just the same. Tain harbour was a safe place to ride at anchor.

About 1902 they were building the Free Church - now the Parish Church and at that time thatch on roofs was getting done away with, so there was a lot of slates sold. D. Ross, Slating contractor contracted with a ship called ‘The Bulwark' -a steamship and she delivered a cargo of slates -perhaps half the cargo to roof the Free Church. Some of the family of Ross the slater are still in Tain. At about that time the Town Council tried to change the course of the river out at the anchorage as the river came in between the ship and the shore and the horses had a difficulty in the extra depth of water. Horses and men spent months making a new channel but it came back to the old one. Where the football ground is today was where wood from the Baltic and other goods were stored. Twice a year when the market was held there the wood had to be shifted. Shows such as Circus end Menagerie were there too. The weekly or daily market for produce was held in the Marketplace, once a year there was the Midsummer Market held on the High Street. The stalls were on both sides of the street from Ross Street to the Royal Hotel. I think the last two on the street were Maggie Couper and Harry the Jew's wife from Inverness. Meggie Couper lived on King Street and just made toffee and candy. She had not a hair on her head - the boys used to say she put a few hairs into every candy stalk, no wetter they were very good. I started to tell you about the Tain harbour and made a safe landing eating candy at King Street.