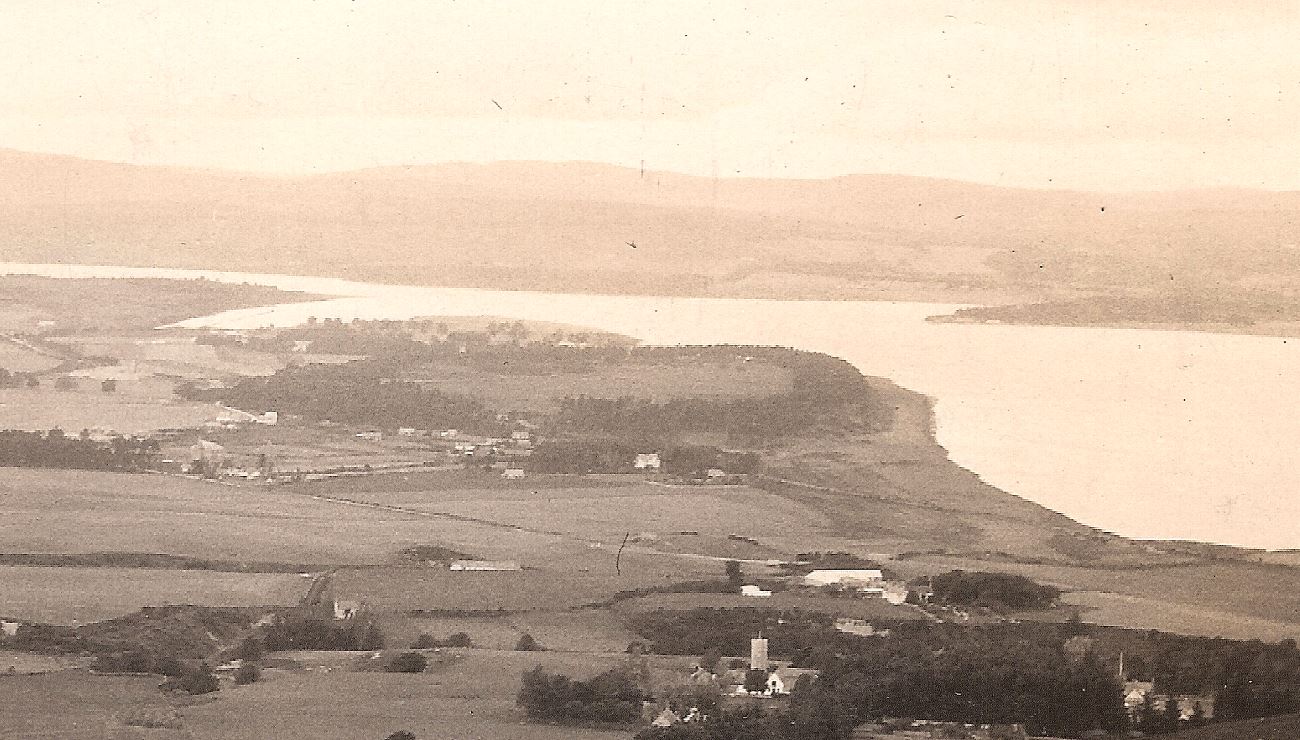 The story of Jock Hairy a Wildfowler who lived on a boat-house in Edderton by Alex "Dow" Macleod of the Grove, Tain.

We visited Jock Hairy on New Year’s Day. Dicky’s mother must have known the old wildfowler fairly well for she it was who suggested to us that we make the journey to wish him Happy New Year. She must have felt he might be lonely, living as he did in an old boat on Edderton beach. I can’t think at this date how old we were, perhaps ten. As I remember it the weather was mild but dank like an autumn day. We ambled along the shore without incident except at one part where the incoming tide had rushed over the low lying fields cutting us from further progress. Happily, the part was fenced and by standing on the wire we made an adventurous crossing of some fifty yards. Looking back the water must have been two feet in depth but as it was moving on briskly and the fence was in poor condition the incident left an impression of great daring.

My first impression of Jock Hairy’s home quarters was that of a penetrating unpleasant smell. It came from the skinned and putrefying carcase of a seal lying in the water’s edge, along which was drawn up two or three punts. Further back stood a big boat. Reaching it without any sign of an occupant, Dicky shouted out in a loud voice, “Are you in, Jock?” At this, a head appeared above the middle of the boat, a weather-beaten but kindly face framed in long hair. It was evident that Jock and the local barber seldom met. “Come in,” he said motioning us to mount the short ladder leading to the cabin. We solemnly wished the old man the wishes of the season and stared around us at his bunk and general layout. It would be idle to pretend that a person like myself who receives impressions instead of observing things closely could remember Jock Hairy’s cabin in detail – a bunk, a bench, a stove and a general feeling of snugness. Our prattles were soon exhausted and finally, Jock came across with two small glasses of cordial, a piece of cake and a large apple for each. “A Happy New Year” we pledged as we took a mouthful of the glass. It was whisky we soon found out and my mouth felt as if it had been burned. Need I say it, we were not equal to the task of finishing and Jock apologised for not having anything more suited to boyish palates. When we examined the long grey-painted punt guns we were on our way. The visit itself was of course not very noteworthy, but Jock Hairy impressed my mind very strangely a few years later when he became the central figure in a murder case.

Hairy’s proper name was Macleod and he hailed from Bonar-Bridge. A wildfowler by instinct and upbringing he had finally made it his livelihood and settled down in Edderton foreshore to harry the wild duck and seals that were plentiful in the Dornoch Firth. In his punt, he would float concealed until within range of his quarry when the long punt gun would shatter the stillness to wreak havoc.

“What”, asked a curious enquirer, “Was your largest bag of duck, Jock with a single shot?”

“Come, come, Jock, surely it was a hundred?” Jock eyed his interlocutor scornfully.

“Do you think, man, I would put a sin on my soul for the sake of one little duck?”

Little stories like that made him a talking point in the district. And of course, he was fond of a dram and enjoyed the company of similar tastes in his houseboat. It was this that led him to the High Court in Inverness to face a charge of murder. There had been a company in his boat one winters night, the bottle had been liberally plied and some tempers must obviously been shown. In the early morning on a path leading up to Edderton farm a local gamekeeper, was found stabbed to death. Suspicion fell on Jock; he was arrested, tried and found guilty of manslaughter despite his assertion of innocence. Five years imprisonment, shortened by a remission of one third for good conduct.  I never saw him again but when he was liberated from jail he returned once more to his old boat-house home and to the wildfowling business that was his life.

In a few short years, he was dead. There was something strange about the circumstances of the crime of which he was found guilty. Those who knew Jock Hairy intimately always claimed that he had been wrongly convicted. He was a gentle and a kind man they said and even in drink he had never been known to threaten or offer violence to anyone. The crime had been the work of some other member of the carousel who had lain in wait for the gamekeeper - locally regarded as a cantankerous and disagreeable man. One man who was thought likely to have done the stabbing immigrated sometime after to Chicago, where he was stabbed to death in a brawl in that city.