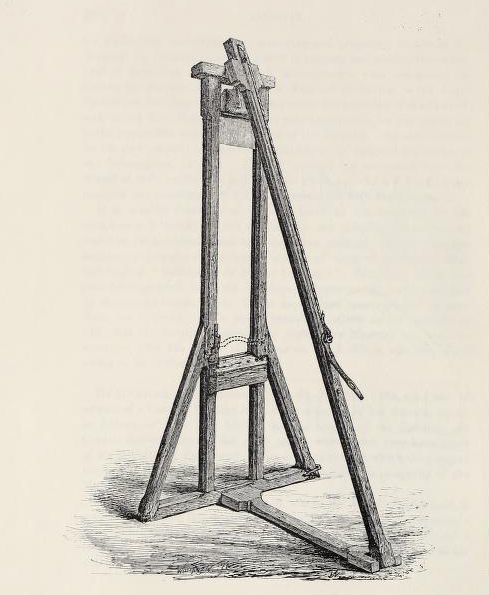 On the 26th of July 1605, William Ross of Dunskaith, at Nigg, stood trial in a Justiciary Court in the Tolbooth of Edinburgh for ‘lese-majeste’, murder and theft. He was accused of the ‘cruel murder and slaughter’ of Alexander Gibson of Nigg and at the same time was tried for organising the murder of his own wife Agnes Ross, paying his servant and ‘cotter’ William McStevin to commit the crime.

Before the trial, William’s servants were taken prisoner, confessed that William was the principal murderer, and two of them McStevin and Andrew Grassich were condemned and put to death. According to their evidence, given at the trial; on the 4th February, William along with Andrew Grassich, Thomas McConachie and Farquhar Ross had spent ‘all the day, till the evening, drinking and making merry’ with victim Alexander Gibson at the house of Hughson Bremner at Pitcalnie. There, around eight in the evening, the accused men offered to walk Alexander home. This was portrayed as a deliberate attempt to get Alexander alone and not far from the house, by a ‘burn-lade’, William is said to have;

“desired the sight of the said deceased Alexander’s sword, the said William and his accomplices most treasonable disarmed him of his armour and weapons that was about him, and most treasonably murdered and slew him, first by striking off his .... hand, next by giving to him a cruel and deadly strike in his head, with a half long sword, and diverse other cruel and deadly wounds in many other parts of his body”

It is unclear what motive William had for killing Alexander Gibson other than to take his purse of 100 marks which he was accused of stealing. He then attempted to cover up his crime, paying four schillings each to William McStevin, Farquhar Ross and Andrew Grassich for the ‘burying of the said deceased Alexander in the earth or casting of him in the sea’. William confessed to the murder of Gibson but there was much more to follow. William had been for several years having an affair with ‘ane harlot’ called Marie Rannaldoche, who was pregnant with his child. The two of them with the help of William MacStevin attempted to murder Agnes Ross. After Marie failed with an attempted poisoning, McStevin is said to have ‘cruelly and unmercifully strangled to death the said deceased Agnes, his spouse, in her bed, within her own house, under silence and cloud of night’. William himself admitted that he left home that night and went to his brother-in-law’s house at Balnagown; around midnight, being troubled in his mind, he dressed and went home to stop the killing, but found he was too late. The promised reward for the murderer was, ‘a rig of bier,  together with the whole clothing that was upon the said Williams back the time of the said Murder, viz. his bonnet, Sark, coat, doublet, breeks, hose, socks and boots.’

As if this was not enough to condemn William, there followed a string of accusations of theft from his neighbours: an ox from James Corbat of Arbol; six geese from Finlay Manson, Minister in Nigg; breaking into David Fearn's barn in the silence of the night and stealing supplies; two sheep from William Mcain MacWilliams from Geanies; and in October-November of the year before, sixteen sheep from Alexander Manson, Donald Beroch and Andrew Bain.

The jury, which included three Ross-shire residents, cleared William of all the charges of theft but unanimously found him guilty of both murders. His property was forfeited and he was to be taken to the Mercat Cross of Edinburgh, 'and there his head to be struck from his body.'

In searching for an image to illustrate the story I discovered that William's execution was carried out using the 'Maiden' (pictured) an early form of the guillotine that was used between the 16th and 18th centuries as a means of execution in Edinburgh.

History of the "maiden" or Scottish beheading machine, with notices of the criminals who suffered by it by M'Culloch, William Thomson, 1815-1869. Pg. 557