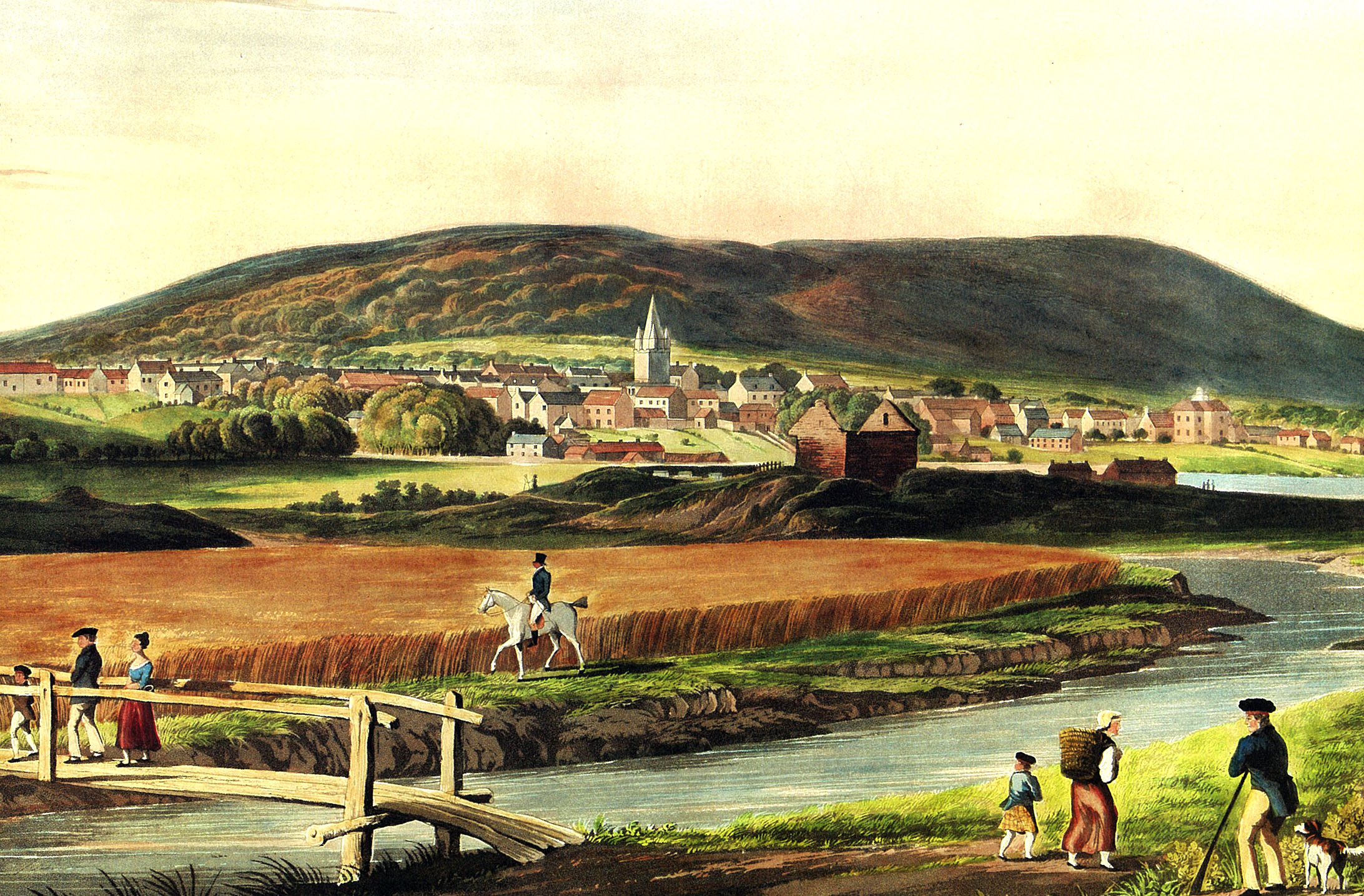 A report on the state of sanitation in Tain in 1842 by James Cameron, Esq., Surgeon, Tain

The town of Tain has been lately lighted with gas, which has also been introduced into almost all the respectable houses. The town is but indifferently supplied with water, from draw-wells and a few springs. That procured from the springs, which are rare, is of excellent quality; but that from the draw-wells is inferior.

There are two or three covered sewers, but these are not sufficient for keeping the town clear of impurities. There is a piece of drain here and there, but very inefficient; and it frequently happens, during a heavy fall of rain, that the streets and roads are covered, and many of the houses inundated. There are three courses of water that run through the town. In summer they are scantily supplied, but in winter they are sometimes converted into torrents. They are in a great measure undefended, and in some places overflow their banks after heavy rain. The courses are not kept clear, and, in consequence, filth proceeding both from animal and vegetable matter is allowed to remain in them. By proper management these courses would prove very beneficial to the town; and at a moderate expense might be made to assume a different aspect, tending to beautify the town. The streets and lanes are very irregularly placed; and, with the exception of a portion of the main street, they are all unpaved.

In front of the houses of the poorer classes, the channels of the streets and roads are not kept open, water being allowed to remain in a stagnant state, and all sorts of refuse being thrown into these channels, and collected therein heaps, in order to form dunghills. There are numerous houses in a decayed and useless state, which are converted into reservoirs for all sorts of filth. There are various causes which render the collecting of manure profitable to the inhabitants: their food principally consisting of potatoes, of which vegetable they raise large quantities, it requires all their ingenuity throughout the year to collect a sufficient supply towards a succeeding crop; and the farmers in the neighbourhood are in the habit of purchasing cart-loads from them, for which they pay from 1s. 6 –to - 2s 6d. per load.

Thus the greatest pains are taken by the inhabitants to procure and collect impurities of all descriptions; such as ashes, dirty water, decayed and decomposed matter, &c.: and this mass is husbanded with the greatest care and attention, and lies at their doors during most part of the year. There are in many instances stagnant pools about the houses, into which the refuse is thrown to keep it in a moist state. These collections of water proceed from various sources, viz. from dirty water and other impurities thrown from the houses, from rainwater, which has no means of being carried off, and in some places from water trickling through the soil. They render the houses damp and emit the most offensive and unwholesome effluvia

The practice of keeping pigs is very common in Tain, particularly among the poor and working classes. From the limited accommodation possessed by this class, the pigsties must of necessity be near the houses; in general, they are placed behind them; in many cases, they are attached to them, and in the immediate vicinity of the back doors and windows. Others, again, are placed immediately in front.

During the last three years the town has increased in size, and on the main street and other parts a number of elegant dwelling- houses and places of business have been erected, which have imparted to the town an aspect superior to that of most burghs of its size and population. The County-house was unfortunately consumed by fire some years ago when three persons were burnt to death. The present gaol is narrow in its accommodation and anything but a wholesome place. A new gaol is, I understand, about to be erected. The principal street and a few others are wide and airy, but the back streets and lanes are narrow and ill-kept.

There are in Tain several families in good circumstances; and, indeed, a considerable proportion of the population consists of respectable individuals in the middle rank of life. No landed proprietor lives in the town. There are no regular policemen; the only persons acting as such are the town officers, two in number.

There is only one scavenger, or street cleaner, for the whole town, and this individual is an old and infirm man, wholly incapable of performing the duties of the situation. There is in the town an excellent academy, and three well-conducted schools. The inhabitants seem very desirous of giving their children all the education their means will admit: from the moderate fees required, they are enabled to give their children a good plain education, and even the rudiments of a classical one.

The houses of the labouring classes are thatched with straw and are seldom water-tight. They generally consist of two apartments: namely, two rooms on the ground floor, or one room on the ground floor and an attic. Those of the poorest class consist only of one apartment. Almost all these houses have floors composed of clay, or of a mixture of earth and clay, and are damp, among other causes, from the very defective drainage, and the heaps of refuse with which they are almost always surrounded. Though there is generally a sufficient declivity to carry away the filth and water, little or no advantage is taken of this circumstance. A conspicuous want of cleanliness prevails among the poor, and even among those who are in general somewhat above that rank. The houses are not well constructed with respect to ventilation. In instances, not a few, the chimneys being ill framed, the houses are subject to smoke and are consequently filthy. In order to obtain a desirable degree of warmth, every opening by which the external air might be admitted is carefully closed up. From the want of a proper provision for that purpose, the streets are very often dirty, the mud and filth being in many places ankle-deep. With very few exceptions, the gutters or channels run close to the houses. If the streets were sufficiently repaired and paved, and proper sewers constructed, the services of scavengers would be less required, in consequence of the natural declivities of the locality, of which at present little or no advantage is taken. Of late considerable improvements have been effected by the authorities, perhaps as many as could be expected from the low state of the burgh finances.

There are three lodging-houses in Tain, which are chiefly occupied by beggars and hawkers. These places are kept in the filthiest condition imaginable; I have been credibly informed that, the bedclothes used in one of these houses have not been washed for the last, five years. Summer being the season when these people are generally abroad, these low lodgings are then often crowded to excess. During the week-days the beggars and hawkers perambulate the country, returning on Saturday night. They frequently, especially when collected in large numbers, drink to excess; and their conduct on such occasions is riotous and disgusting in the extreme. The general charge for such lodgings is two-pence per head for the night, with an ample allowance of whiskey to the landlords, by way of perquisite.

These individuals are, unfortunately, the means of introducing infectious diseases, such as fever, small-pox, measles, &c. Measures have recently been adopted by the authorities in the neighbouring counties for repressing this grievous nuisance ; and I sincerely trust that the authorities in this quarter will in the same way endeavour to rid the country of diseased and debauched vagrants.

Some time ago a teetotal society was instituted in the town, which, at its commencement, consisted of 140 individuals, principally of the lower class. The membership has since been reduced to about 20. Many of those who have joined themselves as members of this society have done so from no other motive than that of inducing dissipated persons to follow their example. Cases of intoxication are now, happily, uncommon, except at fairs and on occasions of special festivity. The morals of the lower classes are superior to those of the same rank in most other places. Crime and the grosser immoralities are uncommon, and the forms and decencies of religion are in general well observed.

Tain is abundantly supplied with fish of various kinds and of the best quality, by the numerous fishing villages along the shores of the Friths. This source of subsistence is much resorted to, and renders living in Tain comparatively cheap. The food of the working people generally consists of fish and potatoes. Butcher- meat sells from 4d. to 6d. per lb. In former years it rarely exceeded 4d. per lb.; but of late, since steam communication with London has been established, the graziers of the district ship cattle largely, and it is this, in connexion with the recently introduced system of high feeding, that has chiefly occasioned the increased price of provisions in the Tain market.